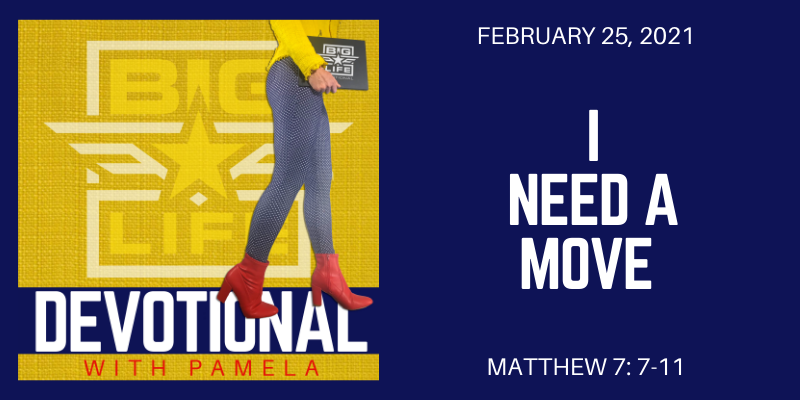 What do you need from God today? Is it okay to ask for it? Where do you need him to show up? Is it right to expect him to respond?

Maybe if you’re being honest, you’re a little like me, and you’ve boldly asked before and you’ve been disappointed by this all-knowing, all-powerful God who seemingly didn’t know how bad you needed it and failed to send his power your way.

So, we find ourselves in a dilemma … do we ask again? Do we actually look for him to respond this time?

God never stood you up honey. Not one time has he been slow to respond because of his lack of care, lack of awareness, lack of time, or lack of power. Every single request you’ve ever made of him, in the name of Jesus, has been personally heard by the Almighty, the best plan was considered, and power was sent out accordingly.

In Matthew 7: 7-11, Jesus himself said with absolute confidence:

“Ask and it will be given to you; seek and you will find; knock and the door will be opened to you. For everyone who asks receives; the one who seeks finds; and to the one who knocks, the door will be opened. Which of you, if your son asks for bread, will give him a stone? Or if he asks for a fish, will give him a snake? If you, then, though you are evil, know how to give good gifts to your children, how much more will your Father in heaven give good gifts to those who ask him!”

That sounds good doesn’t it … but does it pass the test of your real life experiences? Have you always gotten what you asked for? Have you found everything you were looking for? Has the door always been opened for you?

I certainly haven’t. In fact, some of the very things I asked NOT to happen became my reality. And some of those horrible, heartbreaking things have had enough time and space to become nothing short of miraculous in their own way and better because it didn’t go as I had asked. Other disappointments are still in the process of revealing their ultimate divine plan I guess you could say. I don’t quite see their purpose yet. I only see how what I asked for would have been better, but I’m learning I’m still on the journey and I just haven’t seen the destination yet.

1. God sees what we do not see and therefore answers in ways we don’t always understand.

2. We, as his beloved children, should never stop asking.

Did you stop asking? Did you stop believing the all-knowing, all-powerful God of the Universe is actually moved by your prayers? What caused you to stop? It was a disappointment, a let-down, a slammed door, an ending, a pain so deep you don’t think you will ever heal. I may not know what caused you to stop asking God to help, but I want you to know I’m truly sorry. I don’t know what happened that makes you feel like God doesn’t answer you, but I hurt for you right now and I’ve felt the same.

On your behalf, I make this simple request, “God, come do what you do.”

Come restore as only you can restore. Come work as only you can work. Come move these mountains standing in the way. Come heal these hurts. Come change hearts. Come make a way where there has not been one. Come open doors. Come bring your light.

God, where your best plan requires a no to our request, would you please show us where the better yes is?

We’re here having taken a few too many no’s in a row and we don’t see what you’re doing. We don’t understand how this is better. We can’t imagine a future where this continues. So what we’re asking God is to show us what you are doing. Give us a glimpse of what you’re working on. Reveal to us how you truly are making all things work together for good. You don’t have to show us the entire movie, but would you give us a 5 second trailer that promises your goodness?

God, we won’t fight you. We won’t drag our feet. We won’t throw our grown woman hissy fit … at least not any more. Yeah, sorry about that, we won’t do that again. We’re going to stop working against you and partner with you. But God, we need to receive a little something from you to ignite our hope again.

I have a song for you today my sister. A song that boldly asks God to MAKE A MOVE on your behalf.

“This Is a Move” by Brandon Lake:

My friend, wonders are still what God does. He still moves mountains. He still breaks strongholds. He still slays giants. His power is the same today as it was when it caused the Red Sea to stand on it’s ends so his people could pass through. His power is still the same today as when he raised an army from a valley of dry bones. God is still doing wonders. I wonder what he’s doing for you that you just don’t see and don’t feel yet … but you will.

Go ahead and make the chorus of that song personal. Replace the ambiguous “we” with I. Make this your declaration today.

Is it okay to tell God you need a move right now? Is it okay to ask him to do something here? ABSOLUTELY! Don’t back down.

Remember the story of the woman with the issue of blood who sought out Jesus in the crowd. You can read it today in Mark 5: 24-34. She knew she wasn’t supposed to be there. She knew it was wrong of her to be in this crowd. According to the law, anyone she touched would be made unclean as well. Yet, she reached out and touched the hem of Jesus’ robe as he went in the crowd. With that one touch, she was healed.

Now don’t miss that she had been seeking healing for 12 years. She had gone to every doctor and tried every cure. She had spent all her money and likely prayed every prayer to her God seeking healing. And nothing.

So maybe you’ve been trying everything and you’ve been asking for 12 years. Maybe this darkness has you convinced nothing will ever change for you and there is no plan of goodness for your future. And maybe you’re wrong. Maybe you should show up here today and set your heart on God again and ask him to come do what only he can do, and make a move.

Tell God you need a move.

By Lonnie|February 25th, 2021|Categories: Devotionals, Podcast|Comments Off on 801 I Need a Move