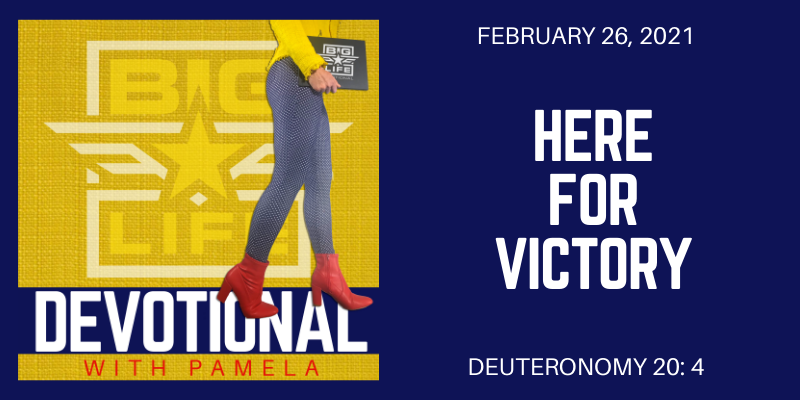 This week I’ve spoken to several women who feel totally and completely defeated. They are exhausted from the battle. Do you relate? Are you growing weary of the struggle? You probably thought at this stage of life you wouldn’t be going through THIS (whatever this is). There are some things in my own life that have just shocked the crapola right out of me too.

All good things come under attack. That’s just the name of the game. So you know what your struggle means my sister … it means you are a GOOD THING. Oh yes you are – you are a good, good thing. It’s time you get on board and see the good in you too. You are overflowing with potential. You are ripe for progress. You are primed for a breakthrough. YOU ARE A GOOD THING, now stop tearing yourself down.

Second, GOD IS ON YOUR SIDE. He is for you, not against you. Whatever you are battling right now, please understand this … GOD WANTS TO GIVE YOU VICTORY IN THIS. Not temporary victory – not kindof almost victory – FULL and complete victory. Victory that leaves you shocked and in awe. Victory that has you dancing because you are completely free. Victory that leaves no doubt God did something miraculous in your life. This is the victory God wants to give you.

He wants to make you more than a overcomer – more than someone who just survived it – but someone who used every ounce of harm for good. This is where you find purpose. When what you went through is the motivation for the impact you make today. When God gets the glory because there’s no way you could have done this on your own. Yes, that kind of victory – that’s what is in store for you!

Hey girl, has the embarrassment infected your identity and crippled your progress? IT WILL if you don’t DROP IT.

And here’s the thing we often miss, GOD WANTS TO WORK WITH THAT. It’s not like God is sitting back saying “gosh, I really don’t want to get my hands dirty here. I hope they don’t seek me in this mess. I would kinda rather stay out of it.”

NO! God pursues the mess. He wants to get all up in your chaos and bring radical change.

Throughout the bible we see Jesus seeking out the most undesirable, the most unlikely, the most disgraced and outcast people, the ones who were too far gone and hopeless in the eyes of everyone else, and doing the impossible. The man who was crippled for 38 years, HEALED. The woman who had been bleeding for 12 years, CURED. The little girl who had already died, BROUGHT BACK TO LIFE. The 90 year old couple without a baby, PREGNANT. The fishermen with empty nets, OVERFLOWING. The prostitute who had ruined her life, SAVED.

Now, let me give you some hope – In those times when you have felt most alone, when the path you were walking was nearly impossible and you didn’t know how you would get up and do it again the next day … and yet somehow you did. THAT IS WHEN GOD WAS CARRYING YOU.

Do you remember the poem ‘Footprints?”
My grandma had the “Footprints” poem hanging on the wall in her house. As a little girl I remember reading the poem repeatedly, memorizing it. It’s a story of seeing scenes from your life, walking along the beach with God. In each scene there were two sets of footprints. One yours, one God’s. But then in the hardest and most troubling times of your life you notice there was only one set of footprints. Why would God leave you when you most needed him? Then God answers, no this is when I was carrying you.

By Lonnie|February 26th, 2021|Categories: Devotionals, Podcast|Comments Off on 802 Here For Victory