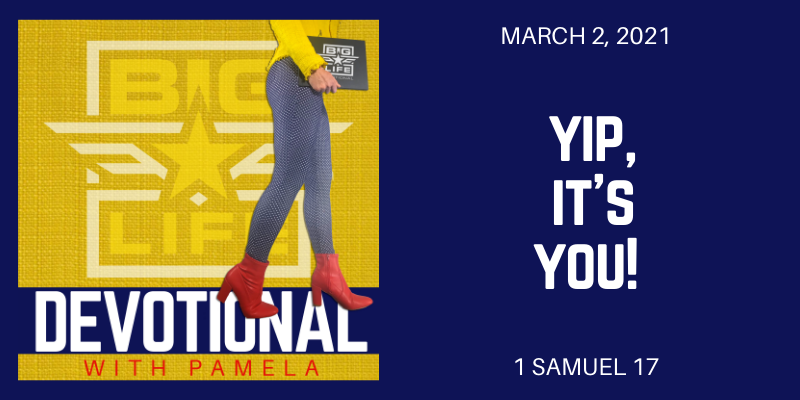 Where you are today is exactly where God wants to use you. What you have today is precisely what is needed. And who you are is why he chose you.

If you’ve ever battled with that little voice inside that continually tears you down and tells you you’re not good enough, just know that’s not the spirit of God. The spirit of God says you are chosen for this, the enemy says you’re just pretending to be someone you’re not and one day the real you will be revealed and this will all fall apart.

Who will you listen to?

Yes, the job of raising that child. You think you’re not equipped, but God has equipped you perfectly.

Yes, the job of working with that person. You think you’re not cut out to deal with this, but you’re handcut for this.

Yes, the job of marching right through the messy fields of your current reality. You think you can’t take another step, but God has already ordained your steps and they are moving forward.

He chose you to be in your position. The one you question if you’re good enough to fill and if you’ll ever figure out. He knew every quirky thing about you and hand selected you for this.

For the teacher who feels she’s not making a single impact … yes you are.

For the nurse who feels she can’t go on another day … yes you can.

For the girl trying to build a business and making more mistakes than forward progress … you’re the one.

For the the woman who has been called to love someone acting really unloveable right now … you’re still the one.

For the one who is tired of being strong … there is strength here for today and this is exactly what God has chosen you for.

Don’t dismiss yourself from the greatness God has put within you. Don’t lower yourself to standards that make it easier to coast on by. God has declared you as good enough, now show up and do what you’re called to do with your life. If you don’t know what you’re called to do with your life, let me make it really clear and really simple … show up exactly where you are with the best of you and stop believing anything that tells you you’re not good enough for it.

In 1 Samuel 17 we read of an unlikely hero. David was the youngest of 8 brothers, likely between 13 and 15 years old. He shows up on scene of a standoff between his people, the Israelites, and the Philistines. The standoff had been going on for 40 days. Every day, this beast of a man named Goliath, who stood over 9 feet tall, would come out of the Philistine camp and yell for someone to come fight him. Not even the best warrior in the Israelite army felt equipped to battle him, so no one responded … not until David.

David was only there to deliver lunch to his brothers. But God had orchestrated something so much greater. When David heard the shouts of Goliath and saw the fear of his people, he stepped forward. Him, the most unlikely person there … the youngest, the smallest, the one who had never even worn a helmet before, he rose up to be the one who would battle the giant.

You know how the story goes. David refuses the battle gear of King Saul and instead chooses 5 smooth stones from a river and goes running straight toward Goliath. David puts the stone in his slingshot and launches it perfectly into the forehead of the giant. The 9 foot beast of a man who had held an entire army in fear for 40 days fell to the ground dead.

What in the world was God doing here choosing David to be the one to rise up and stop this nonsense? Ohhhhh, he was showing us he knows EXACTLY what he is doing when he chooses us and positions us in unlikely situations.

God knew David was young, knew he was little, and knew he was untrained when he chose him for the battle. God clearly chose correctly.

Girl, he knew! And he knew you were exactly who he wanted for a time such as this.

Where you are is where God wants to use you. What you have today is what God will work through. And who he has chosen is YOU. Yes, you. The you who questions why you would ever be the one chosen for this job.

God chose Mary of Magdalene to walk alongside Jesus … many say she had been a prostitute filled with demons. He knew what he was doing.

God chose Moses as the leader of a nation … he stuttered and feared speaking to crowds. He knew what he was doing.

He chose David to take down a giant … he was too young and too little. He knew what he was doing.

By Lonnie|March 2nd, 2021|Categories: Devotionals, Podcast|Comments Off on 804 Yip, It’s You