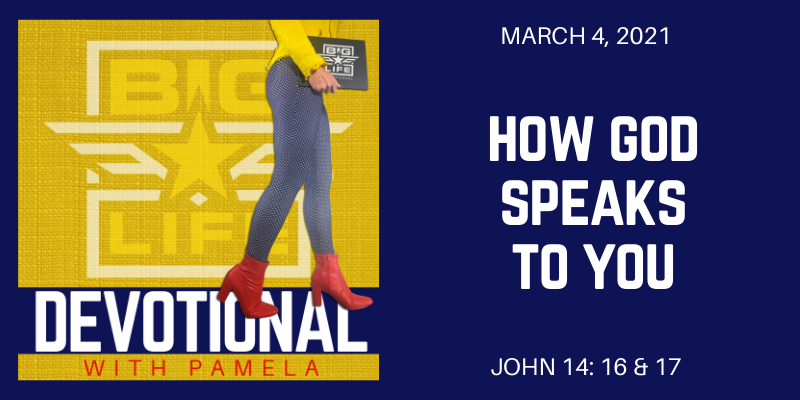 Have you ever wondered why God doesn’t speak to you in a loud booming voice and flashing signs? We read in the Bible about angels showing up on the scene with heavenly messages that are so clear … well where’s my angel with my clear message? And where’s yours?

God spoke to Moses in Exodus 19 & 20 in a loud voice through fire on the top of a mountain. Everyone gathered there could hear his voice coming through the fire. Has God ever spoken to you like that? Have you ever gotten the loud thundering voice of the Lord? I haven’t.

God spoke to Mary in Luke 1 by sending the angel Gabriel. The angel came and told her of things that were not, as though they were so, and it happened. It actually happened. The angel was real, his message was true, and Mary’s life was forever changed. Where’s my angel coming and telling me things? I’ve yet to be woken up in the middle of the night by a heavenly messenger from God. Have you?

In Numbers 22 God speaks to a man through the mouth of his donkey. Like legit, this dude’s donkey starts speaking to him. Y’all, I have this big beautiful 130 pound yellow lab who thinks he’s human. God has yet to give him words and talk to me through him. What’s up with that? Has your animal spoken to you?

So we know God CAN speak in these ways. We know he has in the past … so what’s up with him now? Where are our angels? Where is that loud voice on the mountain giving us clear direction? Why aren’t animals talking to us and telling us the right way to go?

Is God angry at us? Is he giving us the old cold shoulder and withholding his voice? Is he busy doing bigger things than answering our requests and showing up for us today?

Well sister, let me give you a scripture that will make you have a little palm to forehead moment of “oohhhhh, how did I miss this?” The words of Jesus that will open your eyes to what God has been doing and how he has been doing it.

Jesus said in John 14: 16 & 17: “I will ask the Father, and he will give you another Advocate, who will never leave you. He is the Holy Spirit, who leads into all truth. The world cannot receive him, because it isn’t looking for him and doesn’t recognize him. But you know him, because he lives with you now and later will be in you.”

Honey, you don’t need God to speak to you in a loud thundering voice on the mountain. You no longer require an angel to come visit you in the middle of the night. You don’t need to have your dog speak to you in human words. God doesn’t need any of that to talk to you anymore because HIS SPIRIT NOW LIVES WITHIN YOU!

If you have accepted Jesus as your savior, God is dwelling within you and he’s always speaking to you now. You’re never without him. He doesn’t have to show up in some thundering cloud, he’s been inside of you this entire time speaking to your spirit.

Have you ever prayed for a physical sign of confirmation? I have. One time I asked God to show up and give me a very specific sign that what I was feeling was indeed the correct direction for our family.

My husband and I were living in Dallas. We had built a successful mortgage business, living in a 100 year old Victorian house with our little boy who was in pre-school. We were making a whole lot of money and spending even more. Here we were making more money in a single month than we had made in previous years, yet we were racking up credit card debt buying stuff to make us look even more successful. (I throw up in my mouth a little every time I think back to our foolish years.)

My brother was a pastor in Missouri and he had gone on a mission trip to El Paso to help build an orphanage. While there he felt God had told him to move his family there and start a church. While praying for him, I felt God tell me we were to leave behind all our success and go help start this church. I remember going home and excitedly telling my husband I had heard from God that day and we should start packing.

To my utter surprise, my husband responded to my faith-filled obedience with an absolute shutdown. First he said, “Pamela, do you even know where El Paso is?” No … I had to be honest I didn’t. I knew it was on the border of Mexico, and I had been to Mexico before. Cancun to be exact and it was tropical and gorgeous. I assumed El Paso must be the same. Crystal clear waters, palm tress and beaches. Sure, I will move there for the Lord.

Lonnie said, “Pamela, El Paso is the DESERT! And God is not telling me to move to the desert.”

That was the end of that conversation.

So, I prayed 2 specific prayers. First, I asked if God wanted us to move, then start speaking to my husband instead of me because that didn’t go well. Second, I asked for a sign. I was reading a book called “The Dream Giver” and on the cover was a white feather. So, I asked for a white feather as confirmation.

Over the next few weeks, I continued life as normal and googled a few pictures of El Paso. Husband was right … NOT tropical. One day Lonnie came to me in absolute exhaustion and said, “oh my goodness, every time I open my Bible it says “in the desert … go to the desert … here in the desert … I guess we’re moving to the desert.”

We began packing our belongings into boxes I had picked up from the local grocery store, preparing for a move we had no idea when would happen or how it would happen, but we both felt sure God had told each of us it was where we were supposed to be. While in the garage packing one day, a white feather fell from the rafters and slowly floated through the air, landing directly at my feet. Y’all, I’m not crapping you … it for real happened. This was a big, beautiful, pure white feather now laying at my feet. I have no idea what kind of bird this came from because I had never seen them in Dallas before, but there it was.

I still have that feather.

Literally, nothing worked and every tihng was harder than we had imagined. Our relocated business struggled. We parked our car in the garage to keep the circling repo man from taking it back to the bank we could no longer pay. We maxed out every credit card we had just to buy groceries. We dug for coins to pay for our son’s school uniform. And that church we moved there to start … well that was a hot mess.

Eventually the church shut down and everyone scattered. But here we were in El Paso, knowing God had brought us there because darn it I still had that white feather … but this made no sense. But remember what brought our families to El Paso in the first place? My brother had gone on a mission trip there to help build an orphanage just across the border in Juarez, Mexico. My husband and I had found an orphanage in Mexico in need of a little help and we had started going on the weekends to volunteer. There, we met 2 little girls who had been abandoned by their family, and we knew they were meant to be our girls.

I share this with you to tell you God DOES speak to us. He speaks to you if you are a follower of his son Jesus. His spirit lives within you and continually speaks and guides you in the still small voice that you can’t explain. It’s that feeling of “I should go here, I should call this person, I should do that now.” It’s what God used to do through talking donkeys, firey flames, and glowing angels, but now his Spirit is already within you so it just speaks directly to your spirit with an internal conversation.

Signs … well sometimes God will give you those, but my personal experience is they don’t come in the beginning of the journey … they come AFTER you’ve made the hard decision to follow in obedience and do the hard thing.

And then, even when you’re on the right path, following God’s lead, sacrificing and listening for the next step, it won’t be anything like you expected. Why God has brought you here may be completely different than you originally thought. This may all be so much bigger than you ever imagined, but God only reveals his plans one step at a time. You aren’t ready for the reveal of where he’s really leading you. Just keep stepping and one day you’ll look back and realize what he was doing all along.

Listen for him today. His spirit is dwelling within you and speaking to you. It’s not a loud booming voice. It’s not usually with supernatural signs. But it’s a prompting from within.

Oh sometimes I wish I could see the big miracles like we read about in the Bible. I would like to ask Moses what it was like to hear God speaking up on the mountain or see him part the Red Sea. But I bet Moses would say to me, “girl, what is it like to have the Spirit of God living IN YOU!??!!!!”

How cool is that? How fortunate are we? Girl, what is God saying to you today?

By Lonnie|March 4th, 2021|Categories: Devotionals, Podcast|Comments Off on 806 How God Speaks To You