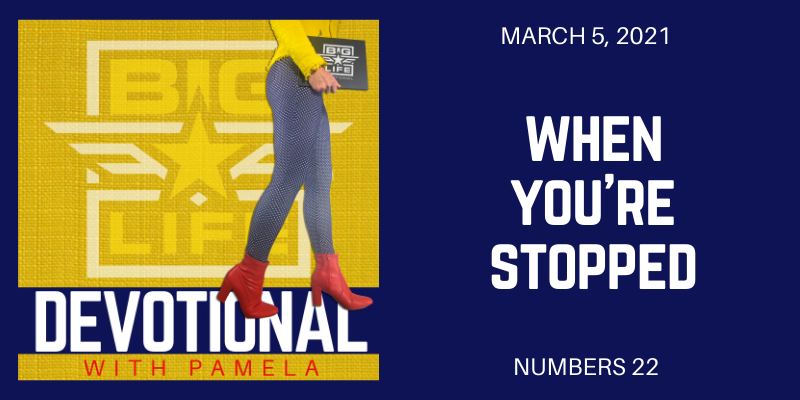 What if every single thing that hasn’t worked out for you actually HAS WORKED OUT FOR YOU?

Sometimes it just helps to know there’s a bigger purpose behind the delay, the detour and the disappointment. Today, may you KNOW it was for something better.

In yesterday’s podcast episode (#806 “How God Speaks”) I mentioned the talking donkey. Have you ever read the story in the bible of the talking donkey? I read it yesterday while studying for the devotional on God speaking to us, and I was so absolutely amazed by it I couldn’t stop thinking about it. I’ve never heard a single teaching on this story and it sure seems primed for the perfect lesson for each of us today. So, here it goes …

Numbers 22 we read of a man named Balaam (bah-lum) whom God spoke to. In fact God spoke so clearly to him and responded to his requests, that the King of Moab was seeking out Balaam to help him defeat his enemies by cursing them. But there was one little problem, the enemies the King wanted Balaam to curse were the Israelites, the people of the Lord. God wasn’t about to curse them, he was guiding them out of Egypt to freedom. But you know what happens when one person gets freed … another person gets threatened.

That’s why sometimes your breakthrough and success is met with resistance by others. They now see you as a threat. And the truth is, we do the same darn thing to others. When will we learn God can be for me and for you at the same time and we can celebrate the heck out of each others breakthroughs? Your freedom inspires me. I want you to be free girl! May my freedom do the same for you.

Back to the story. The Moabites knew Balaam had a special connection with God and they wanted that connection to be used to stop the Israelites from moving forward. When the King of Moab summoned Balaam for his help, Balaam got on his donkey and went to him. BUT the donkey had a little problem on the way. Check this out …

Balaam was trying to get somewhere. He was trying to go get a job done. Trying to use his gifts and talents to help the king who had asked for his help. But no matter what he tried, he could not get his donkey to move forward. Out of frustration he beat the donkey.

We don’t ride around on donkeys anymore, but have you ever beat your steering wheel? The car won’t start … the traffic is jammed … you missed your exit. DARN IT, I’M JUST TRYING TO GO WHERE I NEED TO GO!!!!!

Or how about the job offer is withdrawn, the house contract falls through, the plans get cancelled, and everything changes at the last minute. Whatever you’ve been trying it’s not working. WHY?!!!! Why can’t this just work?

Well, what if like Balaam, you’re on the wrong path heading to the wrong place to do the wrong thing? Balaam had no bad intentions. He had a gift and the King had asked for him to use his gift to help his people. Seems like quite the opportunity. But my sister, not all opportunities are in alignment with God’s best plan for you. Not all opportunities are to be pursued. When something stops you, look around and see if there might be a bigger reason than what you see on the surface.

An angel stood in the way causing Balaam’s donkey to stop, but only the donkey could see the angel. We don’t always see what God is doing in our midst. We aren’t always aware of how he is working on our behalf. But what if we could just start assuming HE IS ALWAYS WORKING? What if we really believed God is FOR US, NOT AGAINST US? What if we could go through our days greeting every delay and detour as a divine blessing straight from the hand of God who is always looking out for us? What if we could walk through our days knowing when doors close it is for our benefit?

I’ve literally learned to get excited when my good plans fall apart. I used to get so frustrated, but then I learned God’s ways are so much bigger and better than mine and he’s always working on my behalf in every detail. So now when my plans are shifted, doors close, things change, there’s a last minute detour, I feel an excitement in my spirit. Oh, what is happening in the unseen right now?!!!!!! What is God protecting me from and what is He leading me to? Good plans fall apart so better plans can fall in place. And those better plans often take a bit of time to reveal themselves as better. For a while they just look like more work and more time.

Stop beating the donkey honey. Maybe this isn’t working because it’s not supposed to work. Things aren’t moving forward because maybe it’s not supposed to move forward right now. Maybe this is reckless and you’re being protected from your own recklessness. Maybe there’s a big ol’ angel with a sword standing in the way halting all progress and instead of cursing the delay and complaining about the detour, you should assume your good good father is once again protecting you, providing for you, and promoting you to something better.

Can we just thank God for all the donkeys that have stopped on us? Can we thank him for all the angels that have gotten in our way and held us back from our own recklesness? Oh we didn’t know they were angels, and we didn’t greet them as such, but what if they were … can we just thank God for them now? And can we change our response to every potential future angel stopping our donkeys and decide now we will be grateful girls for the guidance of God Almighty?

I’m so grateful for all those things that didn’t work out for me, because they REALLY worked out for me!

By Lonnie|March 5th, 2021|Categories: Devotionals, Podcast|Comments Off on 807 When You’re Stopped