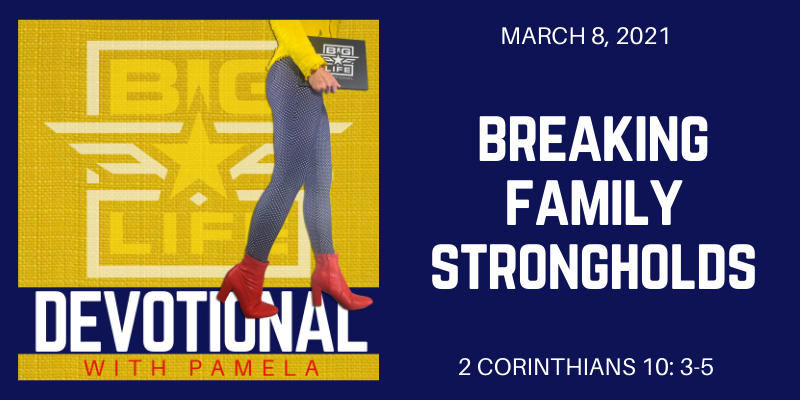 What runs in your family? What dysfunction has carried on through the generations and is now your normal?

Stronghold. This is a word used one time in the new testament. It is made of 2 root words which literally mean a place of strength, but this is not good strength. This is a place where evil is entrenched, where the work of the enemy is fortified and protected behind strong defenses.

And here’s what scripture says about these strongholds in our lives:

2 Corinthians 10: 3-5 “For though we live in the world, we do not wage war as the world does. The weapons we fight with are not the weapons of the world. On the contrary, they have divine power to demolish strongholds. We demolish arguments and every pretension that sets itself up against the knowledge of God, and we take captive every thought to make it obedient to Christ.”

Is there a stronghold in your life? Something holding you back? Something that has power over you, keeping you from stepping into the life you were created for? Will you name it?

Look back … has it perhaps been running in your family for a long time? Has this been passed down for generations and by the time it came to you it had been normalized and accepted as a part of life?

Well honey, it doesn’t have to be. Jesus came to set the captives free … Free of every single thing that has ever held you back. That strong hold will no longer hold you.

Yeah, it ran in your family until it ran into you. It shall end with you. Why? Because you’re the one hearing this. You’re the one with eyes being opened to the power you hold to demolish these strongholds. You’re the one chosen to fight this battle and God has already declared the victory for you.

But … you still gotta fight sister.

I come from a long line of broken and dysfunctional marriages. Both my Mom and Dad only knew life in chaos. On my Dad’s side my grandfather worked endless hours on the farm to avoid the wife he could no longer stand to be in a room with. There was no love there, nor was there faithfulness. On my Mom’s side if my grandfather wasn’t in prison, he was home punching walls and stealing the grocery money for more booze to make his regrets go away.

Until my parents decided it would be different. Together, both armed with examples of everything they DIDN’T want, they created the opposite of what they had grown up in for their children. And with that decision, and their daily choice to seek better for our family, the stronghold was broken and I know exactly what a healthy marriage looks like because I grew up with their example every day.

My husband comes from generations of good men with addictions. Addictions that turned everything good in their lives into absolute destruction. One man after another found his way to his vice, then his vice never let him go. Until my husband. That stronghold ended with him. He saw what it had done to his father, his uncle, his grandfather and this would NOT be allowed in our lives. Not for our son. Not in our home. So it ended.

How does a stronghold end? How do you break what has continued in generations before? Let’s return to our scripture once again:

2 Corinthians 10: 3-5 “For though we live in the world, we do not wage war as the world does. The weapons we fight with are not the weapons of the world. On the contrary, they have divine power to demolish strongholds. We demolish arguments and every pretension that sets itself up against the knowledge of God, and we take captive every thought to make it obedient to Christ.”

The divine power to demolish strongholds is within our THOUGHTS.

When we think “this is how it’s always been for me”, then what has been will continue to be.

When we think “I am this way because it’s how my mama was”, then this is how it will continue to be for you, then your own daughter will face the same fate.

Your thoughts have set themselves up against the knowledge of God and they have taken you and your entire life captive. You are a prisoner of the lies you tell yourself.

You don’t have to be obese just because your grandma and your mama were.

You don’t have to be mentally unstable just because you come from generations of depression and anxiety.

You don’t have to be consumed by worry just because worry is all you were ever taught.

You don’t have to battle addiction just because others before you have.

You don’t have to live in darkness because they did … YOU CAN TURN ON THE LIGHT NOW.

So, SET YOUR MIND ON THOSE THINGS. Make your thoughts obedient to what Jesus says.

Oh yeah, that crap ran in my family BUT IT HAS NOW RUN INTO ME, and I KNOW WHO I AM IN CHRIST JESUS.

Generational curses end right here. They end with what I tell myself.

Do you need something to tell yourself to break the generational curse of bad choices, bad living, or seemingly bad “luck”? Tell yourself this: 2 Corinthians 5:17 “Anyone who belongs to Christ has become a new person. The old life is gone; a new life has begun!”

Everything that has happened before you can end now. It can stop right here with you. Every future generation of your family can be positively impacted by your thoughts right at this moment. Thoughts that tell you YOU ARE A NEW PERSON. THAT OLD LIFE IS GONE AND A NEW LIFE HAS BEGUN.

It’s all being torn down now and it happens right here in your thoughts. From this day forward, those thoughts will be obedient to what Jesus says about me, about my life, about my future, about the generations that will follow me. There is no room here for the enemy because Jesus has been invited into every space, every dark corner, every secret hidden closet that once held shame, guilt and regret … Jesus gets it all now.

And with that, the strongholds are broken.

You are free from everything that ran in your family. That old life is gone and a new life has begun.