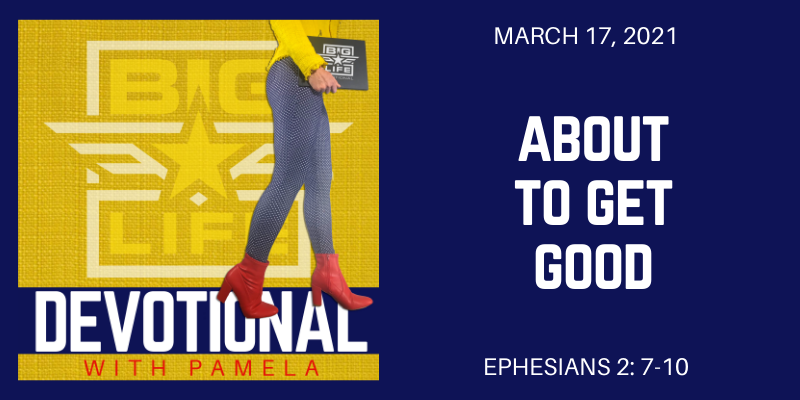 It’s happened to you, hasn’t it? Heck, maybe it’s happening right now. What’s God trying to tell you here? Was it never meant to be? Were you on the wrong path?

No doubt, sometimes God slams doors we’re halfway through. It’s so disappointing to see what’s on the other side, but not be able to get to it, then wonder why it’s not happening. A few years experience in living will teach you God’s ways are no doubt higher, bigger and better than our own, so he stops the path we were trying to make and redirects us to his. But that stopping still sucks. Even when you have faith in God’s goodness, the slamming of the door you wanted to go through is disappointing.

But, not all nos are forever nos. Just because it didn’t happen before doesn’t mean it can’t happen now. Don’t let the disappointment of yesterday keep you from showing up today. Girl, there may be something awesome waiting for you today! The only way you will ever see what God was doing in the details is to not give up in the process.

One of my favorite bands is One Republic. I love their music, and after watching their Netflix documentary, I really love their story. They are a group of 5 guys who started writing music in the early 2000’s. By 2004 they had a record deal with Columbia Records. All doors were open and they were stepping into their dreams. But, the doors quickly closed and their record deal was cancelled and they were left playing shows to an audience of 4 people.

It felt like it was ending before it ever really got started.

We hear the story and know that’s not where it ends because we know their music today. Counting Stars, Apologize, Stop and Stare, All the Right Moves, Good Life and I Lived, oh I know them all! We know One Republic is one of the most successful pop rock banks of the century. We know their songs, we know their success, so to hear the beginning of their story and the seeming failure at the very beginning, well that just makes the story that much better.

We know this is where it’s about to get good.

But they didn’t know their own story when everything went dark, the record deal was cancelled, and no one knew who they were or showed up for their concerts.

Just like you don’t know your own story when things have gone dark, your hopes were cancelled, and things seemed to have fallen apart before they ever really got started. But guess who does know your story … Your good, good Father God knows your story. And he knows this part, the part where disappointment comes and slams the door, well this only makes the story better.

Isn’t this the part where it’s about to get good for you too?

You do what you can, with what you have, and you believe God is making a way to something better. Yes, that’s exactly what you do. And what you DON’T do is throw a pity party, wallow in your despair, pop some more pills and just wish it would all go away. That’s not living. That’s not your story, so don’t step into that one. If you’re already in it, recognize God has a much better story for you and start doing something different today!

So here were 5 guys with insane musical talent, a cancelled record label and no one caring enough to show up to see them play. They probably should have just given up. They tried, it didn’t work. But it just hadn’t worked YET.

Maybe you’ve tried and it didn’t work. Maybe all realistic signs point to the realistic thing of just giving up. But what if it just hasn’t worked YET?

One Republic had a MySpace (yip, remember that), with no record label and no future deals, they put 3 songs on MySpace. Back then you could choose a song to go with your MySpace profile to be featured. There was a music chart of most popular profile songs and guess what song quickly hit the top of the charts … One Republic’s Apologize (“well it’s too late to apologize, it’s toooooo late” … you know it don’t you?)

And that’s how it happened. 3 songs they had put on MySpace and basically forgotten about as they licked their wounds from the disappointment of seeming failure. From MySpace came a new record deal, a hit album, sold out tours, Grammys, and one ridiculous success after another.

The darkness of disappointment felt like their dream had been killed and buried. But they were wrong. They weren’t being buried, they were being planted.

And honey, you’re not being buried, you’re being planted. This darkness is rich soil for your future growth. You’re about to shoot up out of this and grow to new heights you have never experienced before. But right now it feels a little (or a lot) like a burial as things keep going wrong.

That’s okay, you just don’t know the rest of the story yet.

If you knew the story, you would be excited over this part because you know this is where it’s about to get good. If you knew what God knows, you would take this one step at a time and know every step is getting you closer to that breakthrough. If you could see what God sees, you would understand your future success requires this humble time of hard work and no progress to keep you grounded.

Remember the God who knit you together in your mother’s womb ordained all of your days of life before there was one. (Psalm 139: 13-16). He knew you would try, and he knew it would get dark, and he knew he would use this darkness for your growth. Oh he knows how to write a good story, and that’s what he is doing with your life sister!

Ephesians 2: 7-10 MSG “Now God has us where he wants us, with all the time in this world and the next to shower grace and kindness upon us in Christ Jesus. Saving is all his idea, and all his work. All we do is trust him enough to let him do it. It’s God’s gift from start to finish! We don’t play the major role. If we did, we’d probably go around bragging that we’d done the whole thing! No, we neither make nor save ourselves. God does both the making and saving. He creates each of us by Christ Jesus to join him in the work he does, the good work he has gotten ready for us to do, work we had better be doing.”

This is your life and your story, but God is the one writing the script, making the way, putting it all together, and using all of this for something ridiculously good. You have work to do, and you better be doing it.

This failure is not fatal. You’re not be buried, you’re being planted. Growth is a process. Success is a story of highs and lows, ups and downs, twists and turns that simply didn’t give up along the way.

God is writing a story for you. While you don’t know exactly where it’s going from here, you can trust it’s about to get good if things have been dark. This is where the good stuff happens. You just can’t see it yet.

By Lonnie|March 17th, 2021|Categories: Devotionals, Podcast|Comments Off on 815 About To Get Good