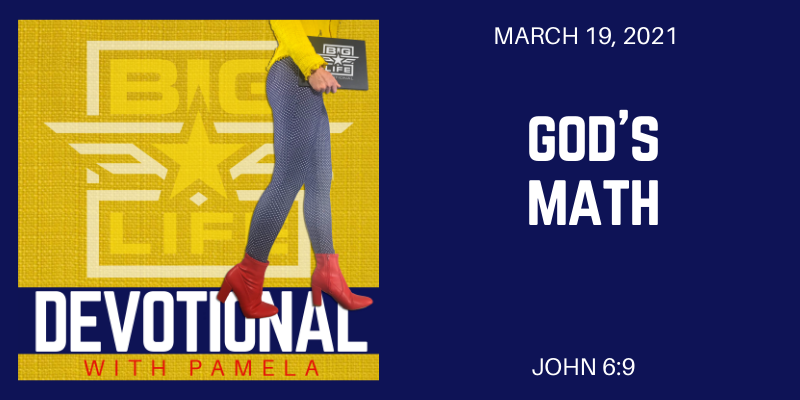 Have you found your big calling in life yet? Have you discovered the purpose for which you were created?

Your days on this earth will come to an end. You will not live forever. All you worked for will one day crumble, rust, be lost, be torn down, or thrown away. This is all soooooo temporary. But, never forget, you are here to make an eternal impact. The things you do, no matter how small they may seem, could make a difference for an eternity.

However, to keep our heads from getting too big and our chest getting puffed up, we probably will never know our eternal impact until God shows us in heaven. The question becomes, are you willing to be faithful in doing the little things and let God do the math?

When Lonnie and I were newlyweds in our early 20’s, we went to a small church outside of Ft. Leonardwood, MO where he was stationed. One Sunday the pastor asked for a volunteer to teach children’s choir. The room went silent. The pastor asked again, “who will teach our children’s choir on Wednesday nights?” Silence. Finally my husband raises his hand and says “we will.”

For the next year we showed up to a room full of middle schoolers and taught them new songs. Neither of us can sing, like at all. We had never worked with kids. In fact, my husband was a military instructor. He spent his days yelling at soldiers in training, dropping F boms, and demanding push ups. Now we’re in a room full of wild kids trying to sing songs about Jesus.

It seemed we were just filling an empty spot of someone who could have done a much better job than us. It seemed we were so totally ill-equipped, and maybe even just wasting time. But this morning, God revealed to me that may have had an eternal impact on a young life I don’t even remember today.

That’s God’s math. Our little things done in obedience can add up to eternal impact with God’s math.

A few years later we lived near the University of Texas El Paso and found out there was a football player at the college who had no family to walk him across the field for his championship game. In desperation the coordinator reached out to me the day before the game and said “is there any way you could walk this boy across the field and pretend to be his parents, he has no one.”

Now, let me paint this picture. My husband is 5’6″. I’m 5’9″. We’re both very white. We show up and there’s “our boy”. He’s nearly 7 feet tall and 7 shades darker than us. I don’t remember him saying anything, maybe even slightly embarrassed that special people had to be called in for him. We each proudly took an arm and marched him across the field.

We get to the other side and the coordinator comes rushing to us and says, “another player had no one show up, hurry run back and escort him too.”

We escorted 3 football players that day on their championship game, claiming them as our own. We sat in the stands and cheered for them, and this girl cried tears of pride for “my boys” and I didn’t even know their names. We were in our late 20’s.

I cried this morning as I realized this little act of love which seemed like nothing by the next day, could have made an eternal impact. God’s math.

Remember the story of Jesus feeding the crowd of thousands of people with the only food there was? John 6:9 says “There is a boy here who has 5 barley loaves and 2 fish, but what are they for so many?” Like really, what difference does this little bit really make for so many people?

Just like what does this little thing I can do really make for such a big problem? It’s so easy to dismiss the little we can do in the face of a big problem. But God’s not asking us to figure it out, he’s asking us to trust his math.

What happened with the 5 loaves of bread and 2 fish? They fed the crowd of thousands. That’s God’s math. Every one ate as much as they wanted and there were leftovers. That’s impossible … but that’s God.

What scripture doesn’t tell us is the impact it made in the lives of the people who were fed that day. I wonder why God leaves that out of the story? Could it be because we don’t always get to know how God uses little things in big ways? Could it be because he’s saving some really big surprises for us one day in Heaven when it will all be revealed?

Hey, I don’t even know what God could have done with the little things you have been obedient with. There’s no telling. But you better believe God knows. He used you. He used your act of faithfulness, no matter how small it was, and it has made an impact. With God’s math, an eternal impact.

Maybe one day I’ll get to Heaven and see a familiar face. Maybe it will be one of the kids we taught a song in children’s choir or one of the football players we served as stand in parents for, and they will introduce me to their children and they’re all there because of an eternal impact made from something I thought was little.

We can’t be so consumed by chasing the big things when little things are all around us. Little opportunities in God’s hands can become eternal impact.

What if we stopped expecting to see a big return and big praise for everything we do, and instead be absolutely honored we might be used in any little way possible to show someone the love of God. That we might be a reflection of Jesus to someone in a brief encounter that we forget about 5 minutes later, but it changed the entire trajectory of their life.

Oh don’t you want to show up for the little things? Don’t you want to be tuned in to the opportunities to do things others will pass up, and maybe be part of a much bigger story?

Hey God, all I’ve got are these 5 loaves of bread and 2 fish, but use them as you want.
I have 1 hour on Wednesday nights to teach something I don’t even know how to teach, but I’ll do it.
I have my Saturday afternoon available to cheer on a few boys I don’t know at a football game. I’ll show up proud.

Rhab was a prostitute. God used this woman’s little act of obedience to impact the history of the world. Her little thing was offering a hiding place of 2 spies. That’s all she did. That simple act led to the victory of the Israelites at Jericho, the saving of her entire family, and the bloodline of Jesus.

One choice. Just one. By a woman with everything stacked against her. But with God’s math, it was an eternal impact.

What could God do with your little yes … he could use it for an eternity of impact.

Do the little things my sister. Do them proudly. Do them willingly. Do them faithfully. And let God do the math. He’s not telling you the rest of the story because he’s saving a surprise reveal for Heaven. You’re here making eternal impact!

By Lonnie|March 19th, 2021|Categories: Devotionals, Podcast|Comments Off on 817 God’s Math