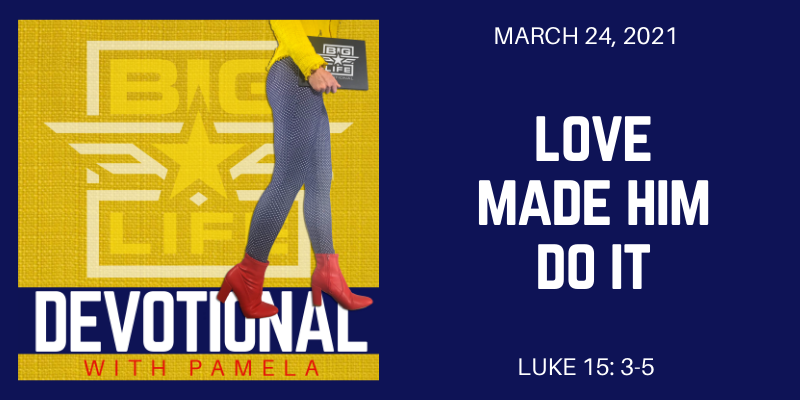 If you feel empty, could it be because you’ve pulled away a bit? Have you distanced yourself, stopped doing the things you once did that brought you closer to God? I believe we all go through these seasons in life where we lose our way a bit, we go chasing after the sparkly object, we get busy with this and distracted with that, and before we know it we’ve fallen into a habit of doing life without God.

That is emptiness. That emptiness is felt as a result of that God sized hole within you being unfilled.

You’re listening today because you have a relentless God who will stop at nothing in his pursuit of you. If you’ve pulled away, He misses you. Through it all he’s been chasing you down recklessly. There’s no where he won’t go after you. There’s nothing he won’t do to reach you. He will sacrifice anything to get to you. And hasn’t he already proven that? Remember, he sacrificed his one and only son so that you could be redeemed and not have to pay the price for your own sins. That’s reckless in our eyes. That’s love. Love makes you do crazy, unreasonable things.

Y’all, I love my dog. My kids tease Tank is my favorite child. They’re probably not wrong on most days. Our current home in Key Largo is on the canal. In the backyard is a cement ledge which drops straight to the water. The only way out of the water is up a ladder. There’s no ramp or shore, just a ladder. Dogs don’t climb ladders which means for Tank, jumping in that water is not a good idea. But he did it yesterday. In a moment of frenzy watching his Daddy fish, he dove right in after the fish and there was no way for him to get back out.

But love makes you do crazy things. I dove in and in a moment similar to the moms who have superhuman strength to lift a car off their child, in deep waters I somehow hoisted his 130 pound butt above my head to get him back on the dock.

The neighbors came running after hearing all the commotion and proceeded to tell me there’s an 11 foot crocodile who typically lives by our dock. Yip, I was flailing around in those waters … love made me do it.

God’s love for you makes him dive in head first for you too. His eye never leaves you. God has a laser focus on you and there’s simply nothing he won’t do for you in his pursuit. There are no limits to his love for you. Even when we are so undeserving of this love, he lathers it on us.

It seems reckless to leave behind the 99 to go looking for the 1, but this is exactly what God does for us. And don’t get all jealous because at some point or another, you were the one he came looking for. The 99 have the safety of each other. The one separated and alone is in danger and the great Shepard will pursue that one until it is found, then carry them home on his shoulders.

I never left God, but I sure put him on the back burner as I pursued success. He waited patiently for me then came to rescue me when I failed. I was the 1.

Maybe you recognize those words, the words of one of my favorite songs called “Reckless Love” by Corey Asbury. Listen to it today. Know that at this moment, God is climbing mountains for you. He is kicking down walls for you. He is making a way where there has been no way. He is shining his light on those areas of darkness. He is showing you the answers in the middle of the confusion. He is preparing to carry you back on his shoulders and throw you a big celebration when you get there.

By Lonnie|March 24th, 2021|Categories: Devotionals, Podcast|Comments Off on 820 Love Made Him Do It