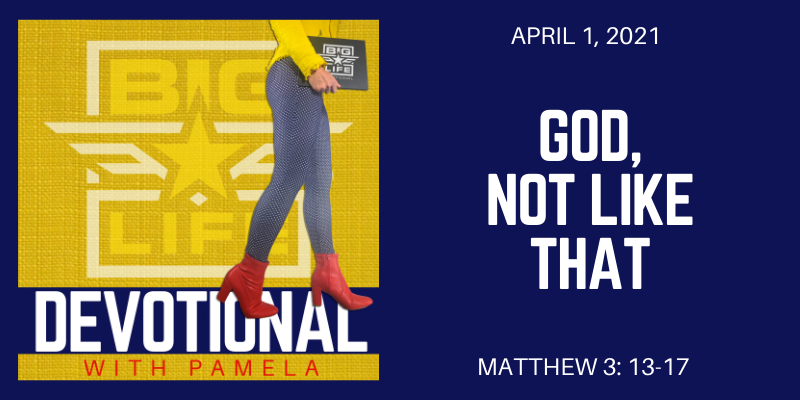 Are you pretty sure you know what’s happening next? Like you’ve worked hard, you’ve made plans, and you have expectations for what’s coming next in your life? Has that ever NOT worked out for you? Have your plans ever gone side ways? Have you ever been shocked by the unfolding of what happens next and in disbelief see absolutely nothing go according to your plan?

Just how big of a grown woman hissy fit do you throw when it doesn’t go your way? How long do you pout? How long are you resistant to the unfolding of the new plan after your plan is spoiled?

We think we know best. But who really knows best? God, of course. We know that. You could have said it before the words even left my mouth, but living like you really trust it is totally different. God straight up knows better than you. His eyes have seen what you have not yet seen. His mind has already gone ahead to places you do not know of yet, so he knows what is necessary NOW to get you to the best NEXT.

There’s a real internal battle within me when my eyes behold sweet potato chips. You know the ones in the black bag that cost like $7 and they’re sprinkled with sea salt. I WANT THEM NOW. But, I have zero self control once I open that bag. Before I know it I’m ripping the sides of that black bag all the way open so I can lick the crumbs out of the bottom corners. Then you know what comes next? A tummy ache and regret. That was NOT what was best for me, but it was what I wanted right now. And when we continually choose what we want NOW, we sacrifice what is BEST.

But y’all know this goes way beyond sweet potato chips and belly aches. This goes deep into our most treasured relationships, our God appointed dreams, and our life purposes. When will we understand God is doing something bigger than we can see right now and our continual chasing of what we want in the moment will cause us to miss what is truly possible?

What has God been trying to do in your life, but you have been fighting him because you think you know what’s best right now? What miracle could you be missing because you refuse to shift your perspective from how you think it’s gotta be? Listen to me sister, the way you think it HAS to be may be a row boat in comparison to the ark God has planned for you … but first it’s gonna rain. Would you be willing to loosen your grip on the little you think you can control and dare to see what God might be doing here?

We know of John in the Bible as John the Baptist. He was a wild man with crazy hair who lived in the wilderness, wore clothes made of camels hair, and ate locusts and wild honey for breakfast. This dude was tough. He was the real deal. And God had given him a mission to baptize believers in water.

Then, here comes Jesus, walking up to wild man John the Baptist at the water. John has already played out this scenario in his head. He knows exactly how it should go. This is where he stops what he is doing and allows Jesus to baptize him. What a moment this is going to be. But that’s not how it goes at all. This doesn’t unfold the way John had planned.

John tried to DETER Jesus. Why? Because this isn’t how he thought it should be. Jesus, there’s no way I’m supposed to baptize you. You’re the whole reason I’m out here dunking people in water. You’re the one we’re following. I need you to baptize me. You’ve got this wrong here.

Have you ever tried to deter Jesus? Oh I have. God, you’ve got the wrong girl. I can’t do this. I’m not good enough for this. Pick someone else better than me. Move on, I’m not your girl. I was trying to deter God.

As my good plans fell apart I couldn’t possibly see how better plans were falling into place. God was at work in the middle of the disappointment, but I didn’t understand his work so I tried to deter him. No God, it’s not supposed to be happening like this. Look, this was the plan. This is how it would all work out best.

That’s me talking to God Almighty. That’s me with my tiny vision only seeing a fraction of what’s happening trying to deter God, the one who knows the end from the beginning, the one who sees it all, and holds it all in the palm of his hand. Isn’t that you too? No God, not like that, like this. It should follow this plan. It should all happen like this.

Isn’t God patient with us? I’m pretty sure if I were God I would have struck my own self with lightening a long time ago. Like GIRL, get out the way already!

God knows what he’s doing. He’s not confused. He’s not mistaken. He’s not fooled by who you think you’re not … He knows exactly who you are and what you’re capable of because HE DESIGNED YOU.

So maybe, just maybe, we should stop trying to deter God. Stop trying to convince him this mess must be a mistake, stop trying to avoid what is happening, and instead look to see what God is trying to do here and trust he’s working all of this together for something better than you could have ever imagined.

Verse 15: Jesus replied, “Let it be so now; it is proper for us to do this to fulfill all righteousness.” Then John consented.

And when Jesus says NOW, you should do exactly what John did … consent. Agree. Go with him. Trust him. Even when it makes zero sense to you. John was still thinking, Jesus, you’ve got this all wrong. I shouldn’t be baptizing you. I’m a no one. You should be baptizing me. But okay man, whatever you say. I’ll go with it. I consent.

Now, look at verse 16-17: As soon as Jesus was baptized, he went up out of the water. At that moment heaven was opened, and he saw the Spirit of God descending like a dove and alighting on him. And a voice from heaven said, “This is my Son, whom I love; with him I am well pleased.”

Woahhhhhh Jesus … look what John almost got in the way of. He almost reasoned his way right out of being part of this miracle. God wanted to show himself for who he was and who Jesus was, but because the process didn’t make sense to John, he was trying to deter Jesus.

The process may not make sense to you honey. This may not be how you imagined things happening in your life. This wasn’t what you planned and it sure doesn’t look like what is best to you. But, you may be standing in the way right now. You may be just about to reason your way out of being part of a miracle here.

Consent. Agree with God you want to be an active part of what he is trying to do now. When you do, you get to be part of the miracle. You get to see God in action.

God I want to be part of your process. I want to see the unfolding of your better plan. I want to be used as part of the miracle. I give up my need to understand it all and control it all, in exchange for the opportunity to be used in your miraculous works.

Yes Lord, I consent. I’m all in on your plan. It still doesn’t make sense to me, but it doesn’t have to. I trust you.

By Lonnie|April 1st, 2021|Categories: Devotionals, Podcast|Comments Off on 826 God, Not Like That