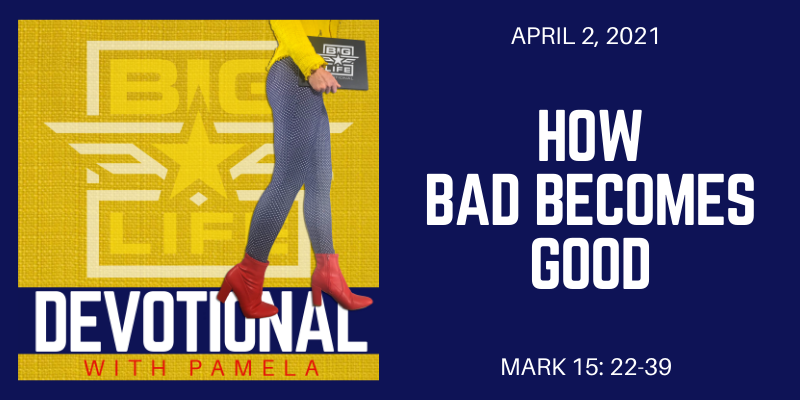 Good Friday, the day we remember the crucifixion of Jesus. The personal sacrifice of One for all. For me. For you.

What an incredibly sad day. The day the world fell dark and our Jesus was crucified for being nothing other than holy, righteous, miraculous and pure.

And yet, we call it Good Friday.

The worst day in history when evil prevailed and the son of God was unjustly put to death between two thieves. It was bad. Painful. Dark. Terrifying. Unfair. And yet it was Good.

It was the ultimate good.

Let’s read the story of this day:

Mark 15: 22-39 They brought Jesus to the place called Golgotha (which means “the place of the skull”). Then they offered him wine mixed with myrrh, but he did not take it.

**Do you know why the offering of this wine mixed with myrrh is important? Why such a specific, seemingly unimportant detail to be included in the record when Jesus refused it? It’s important because this mix was a drug which dulled the senses. An offering to the one facing an agonizing death by crucifixion, making it more bearable. But Jesus refused. He refused ease from the suffering. He wanted a clear mind while he hung on the cross. Why? So he could think of me and you. So he could give wholly of himself, enduring it to the full for us.

24 And they crucified him. Dividing up his clothes, they cast lots to see what each would get.

It was nine in the morning when they crucified him. The written notice of the charge against him read: the king of the jews.

They crucified two rebels with him, one on his right and one on his left. Those who passed by hurled insults at him, shaking their heads and saying, “So! You who are going to destroy the temple and build it in three days, come down from the cross and save yourself!” In the same way the chief priests and the teachers of the law mocked him among themselves. “He saved others,” they said, “but he can’t save himself! Let this Messiah, this king of Israel, come down now from the cross, that we may see and believe.” Those crucified with him also heaped insults on him.

When some of those standing near heard this, they said, “Listen, he’s calling Elijah.”

***I always found Jesus’ final words confusing and burdensome. “My God, my God, why have you forsaken me?” Every translation of the bible reads the same. There is no alternate meaning here or way to read it. Jesus is saying God has turned his back on him in these final moments. Why?

When Jesus hangs on the cross, despised, suffering, and dying, he has upon himself the entirety of all sin. My sin, your sin, and every sin all of creation had ever, and would ever, commit was all on him. God cannot look upon sin, so he turns his back and withdraws his favor.

The words Jesus spoke were a direct reference to Psalm 22. He was quoting the writings of David word for word “My God, my God, why have you forsaken me?” The people hearing these words would have known the rest of the story, the rest of the writing. Jesus was referring to this because it begins with the hardship of reality, it turns to praise of the Almighty, and then the guarantee of God’s victory.

Jesus was remembering the truth of God’s word. He was choosing to endure this reality because of the promise of what will come. Yes, despair in death, but hope for deliverance. Jesus was placing his full trust in the Father.

36 Someone ran, filled a sponge with wine vinegar, put it on a staff, and offered it to Jesus to drink. “Now leave him alone. Let’s see if Elijah comes to take him down,” he said.

With a loud cry, Jesus breathed his last.

The curtain of the temple was torn in two from top to bottom. And when the centurion, who stood there in front of Jesus, saw how he died,[c] he said, “Surely this man was the Son of God!”

***The full picture of what has been done here is in that one verse “the curtain of the temple was torn in two from top to bottom.” Understand in the temple there was a curtain separating the place where the presence of God dwelt and where others could enter. The curtain kept people out of this sacred place. Now, with the sacrifice of Jesus, the curtain was torn, meaning WE CAN ENTER.

We can come face to face with God. We have been deemed as worthy to stand in his presence. I don’t have to wait for anyone to speak to God on my behalf, Jesus has already spoken for me and I can boldly approach the throne. I’m no longer seen with the stain of my sin, I’m completely covered in the blood of Jesus. God doesn’t have to turn from me, because he turned from his son Jesus on that cross and it was done once and for all. For me, and for you, so that we can have this relationship with our creator.

I think of the seemingly worst, hardest day of my life so far. Days when God could have done the miraculous in that moment and saved my Daddy, saved my best friend, protected our family, stopped the life altering bad decision of one I love so much. He could have stopped it. He could have saved our family of the agony. But he didn’t. He let it all unfold, moment by moment, ending with loss and grief.

And all this time, there was a bigger plan at work. A bigger, better plan that I cannot see, but I can trust.

Here we are today, each of us in our own hardship and uncertainty. Some with loved ones lost or in the hospital. Some with jobs lost and income gone. Some with more chaos than they can bare. And some with heavy burdens to carry that will only get heavier for a while longer.

Today as I fast, I’m specifically praying for a 2 year old little boy named Levi. I don’t know him. I don’t know his family. I don’t even know where they live. But I’ve been following their story for the past few months as Levi suffered a near fatal drowning accident and now they’re fighting to bring him back. I ache for this family. I have begged God for a miracle, and in my mind Easter would be a really good time for that miracle. For Levi to wake up and return. To be restored. For his family to bare the ultimate miracle to the whole world.

But God knows exactly what he’s doing here. God is working in the wait. He is working in the seemingly worst possible scenario, and he is working for GOOD. Oh what God is doing in this story. We trust, like Jesus did, the hardship of reality as it turns to praise of the Almighty, and then the guarantee of God’s victory.

The story is still unfolding.

Your story is unfolding.

We do not know what God is doing because we have not seen his master plan. So here’s what we can do … we too can reference Psalm 22, just as Jesus did in the middle of the pain.

We can acknowledge the hardship, we can remember God’s faithfulness and we can count on his victory.

My God, my God, why have you forsaken me?
Why are you so far from saving me,
so far from my cries of anguish?
2 My God, I cry out by day, but you do not answer,
by night, but I find no rest.

3 Yet you are enthroned as the Holy One;
you are the one Israel praises.
4 In you our ancestors put their trust;
they trusted and you delivered them.
5 To you they cried out and were saved;
in you they trusted and were not put to shame.

11 Do not be far from me,
for trouble is near
and there is no one to help.

22 I will declare your name to my people;
… I will praise you.
23 You who fear the Lord, praise him!
… honor him!
24 For he has not despised or scorned
the suffering of the afflicted one;
he has not hidden his face from him
but has listened to his cry for help.

27 All the ends of the earth
will remember and turn to the Lord,
and all the families of the nations
will bow down before him …

future generations will be told about the Lord.
31 They will proclaim his righteousness,
declaring …
He has done it!

This is what Jesus knew on the cross. He knew the victory coming. He knew God had a view of the bigger picture and a plan of goodness. And hasn’t God done it?

And isn’t he doing it again here? Isn’t he at work in this wait? Isn’t he working in the darkness and unseen? Won’t he bring victory here?

If you need a song today, put “See a Victory” by Elevation Worship on repeat. God takes what the enemy meant for evil and he turns it for good. You will see a victory.

There’s a bigger picture than we can see. There’s a greater plan at work. God knows exactly what he is doing in the hardest of times and he has proven it will all be redeemed.

What happened 3 days later? Jesus rose from that tomb with victory in his hands and death was forever defeated … for me and for you.

And then it was GOOD!

By Lonnie|April 2nd, 2021|Categories: Devotionals, Podcast|Comments Off on 827 How Bad Becomes Good