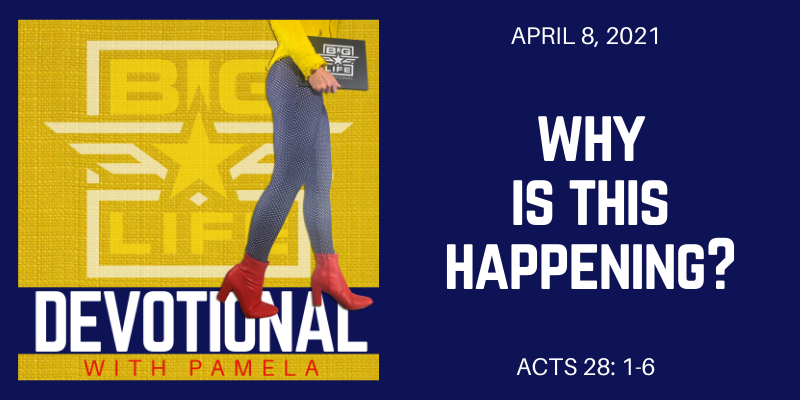 Why have seemingly bad things happened to you? Why this hardship for your family? Have you been asking why?

I’ve asked that question along the way and God tends to get real quiet on me, which leaves our human minds to wander and make crap up. Seriously, we jump to conclusions and assumptions, when maybe the answer to why is quite simple.

Have you ever thought misfortune came upon you as a punishment and it leaves you scrambling to figure out what you did wrong so you can fix it? I have, and it sent my faith into a bit of a tailspin.

As a young newlywed, I worked at a real estate office. Early one morning I was in the office helping a few co-workers with their voice mail and suddenly my world spun out of control. Like literally, the room started spinning and I collapsed in dizziness. They called an ambulance as I lost all control of my body and the words coming from my mouth were no longer recognizable. It was traumatic for everyone.

It ended up I was having a massive stroke and a large blood clot would be lodged in my brain stem for 8 hours. In the months to follow, my sweet young newlywed husband would feed me and bathe me, he even shaved my legs for me. I learned how to walk again and talk again, and honestly felt so very fortunate to just be alive after an event nearly impossible to survive. God had surely saved me. My faith had never been stronger.

Eventually I returned to the real estate office where I worked and my co-workers gathered to hear the miraculous story of how God had saved my life. Those who had seen it were certain I wouldn’t survive. But there was one co-worker who wasn’t impressed by God saving me, he was instead focused on what caused it. He said “Pamela, massive strokes don’t happen to 19 year old girls. You have an unresolved sin in your life that has brought this upon you. Have you prayed to discover what you’ve been doing wrong and repented?”

Suddenly I went from knowing God had saved me, to thinking God was punishing me. My faith was traded for fear and I was terrified of this unknown sin of mine that would lead to the next tragic event. My prayers were centered around “WHY GOD, why did this happen to me and what do you want me to fix?”

Maybe something is happening in your life right now and you’ve been questioning why? Are you being punished? Is this a result of some unforgiven sin, some continued trespass, some unrighteousness bringing this misfortune upon yourself and your family?

Has your faith turned into fear, like mine did?

There’s an example of this in the bible. Let’s read it together to help us with this tangle of faith and fear in the face of misfortune.

Paul had been taken prisoner and was on a ship in the middle of a storm. The ship was falling apart and everyone feared for their life. They eventually shipwrecked on the island of Malta. Let’s just say it had been a rough day for Paul.

Acts 28: 1-6 “Once we were safe on shore, we learned that we were on the island of Malta. The people of the island were very kind to us. It was cold and rainy, so they built a fire on the shore to welcome us.
As Paul gathered an armful of sticks and was laying them on the fire, a poisonous snake, driven out by the heat, bit him on the hand. The people of the island saw it hanging from his hand and said to each other, “A murderer, no doubt! Though he escaped the sea, justice will not permit him to live.” But Paul shook off the snake into the fire and was unharmed. The people waited for him to swell up or suddenly drop dead. But when they had waited a long time and saw that he wasn’t harmed, they changed their minds and decided he was a god.”

Why did this happen? The islanders of course saw the bad things that had happened to Paul and immediately assumed it must be a punishment for what he had done. Oh, that sounds familiar. Just as my stroke was a punishment for my unresolved sin, right? Faith meets fear and life comes to a halt.

But really, why did the snake bite Paul? What was the cause of this? Let’s answer the question of why. It actually says it right here in the scripture and a sermon from Elevation Church recently confirmed my thoughts. Read it again. “As Paul gathered an armful of sticks and was laying them on the fire, a poisonous snake, driven out by the heat, bit him on the hand.”

It’s quite simple, it was the heat of the fire that drove out the snake. And the snake did what snakes do … it bit him.

That’s it. The snake was doing what snakes do and as a result, Paul was bitten.

What did the islanders think? Oh surely this was some sort of punishment. Paul must be a murderer! All these bad things happening to him, surely it’s a punishment for his wrongdoing!

Maybe bad things have been happening to you and you’re beginning to question if you’re being punished. Oh no doubt our actions have consequences. If you eat like crap, you feel like crap. If you avoid the mess, the mess only grows. If you spend more than you make, you end up in debt. If you are habitually late to your job, you may end up without a job. Those are consequences of your actions, and you alone are responsible for your actions. But is this a punishment?

No, honestly my sister, bad things happen because we live in a fallen world. This is life on Earth, not in Heaven, and here it won’t be perfect. Cars crash. Storms come. Companies shut down. Sickness happens. People do bad things. We screw up. And snakes bite. Why? Because that’s just what they do. Things go up, and things come back down. This is life. And when life happens to you it’s not because of some secret unresolved sin creating your punishment.

You have been forgiven. God no longer looks at you and sees that sin, no matter how big or small it is. He’s not sitting on his throne in heaven concocting some sort of twisted plan to get back at you. Ahhhhhh, that girl gets a stroke for what she’s done. And her, well she gets a divorce as her punishment. Over here, she will have a prodigal daughter because of what she’s done. I’ll dish out a little sickness here, a setback there, and a major disappointment up here, all as a result of what she’s done.

NO!!!!! That’s not the way our God works. He sent his one and only son to pay the price for all of this. He’s not interested in dishing out punishments for things that have already been redeemed.

Why did Paul get bitten by the snake? Because the heat of the fire drove it out and then it just did what snakes do … it bit. Plain and simple.

The judgmental people on the island were so quick to jump to assumptions of Paul’s misfortune. He must be a murderer! No, he must be a man who was just trying to help build a fire and got bit by a snake!

Aren’t we so quick to point fingers and make assumptions too? Oh, she’s getting what she deserves. Look at her family a mess … she probably didn’t take her kids to church when they were little. They didn’t go on weekly date nights. They didn’t eat dinner together. That’s why this has happened.

STOP IT. Maybe her kids have gone astray because that’s what happens sometimes, regardless of how much they’re in church and how many dinners you have together. Maybe her husband had an affair because he went through a mid-life crisis and was tricked by the enemy in a moment of weakness, and it had nothing to do with the number of date nights. Sometimes things just don’t work. Sometimes things are bad. The burden isn’t always ours to carry.

Our God is good, our God is gracious, our God is faithful. He’s not handing out punishments and paybacks. When things go wrong you don’t have to carry around some guilt and shame over the things you have done, living in fear God’s going to get you again if you don’t fix this.

Let me tell you what God does do here … he takes any intended harm, any misfortune, any seemingly bad luck, and he uses it for good in the lives of those who love him.

He took the snake bite of Paul and used it to show his protection over him and made the islanders listen.
He took the mistreatment of Joseph’s by his own family, and set him apart so one day he could save thousands of lives through his leadership.
He took this girl right here who had a stroke, and made me ridiculously grateful for the gift of every single day so I could come to you with this level of excitement every morning and talk to you about Jesus.

Things happen. They happen to all of us. Good, bad, and everyone in between. This is life. It’s not because you’re being punished. However, if you are a follower of Christ and lover of God, you can trust these things will be used for good. He won’t put you in a bubble and never let things happen to you, but he will always work it together for something good.

So, back to the question … Why is this happening to you?

Why? Because here on Earth life isn’t perfect. Things happen no matter what you do.

Are you being punished? No.

Is there something you can do to change it? Maybe. Remember your actions have consequences. Do the best you can and receive God’s grace to cover the rest.

What’s going to happen? Well, somehow someway, God will use this all for good. Trust him.

By Lonnie|April 8th, 2021|Categories: Devotionals, Podcast|Comments Off on 831 Why Is This Happening?