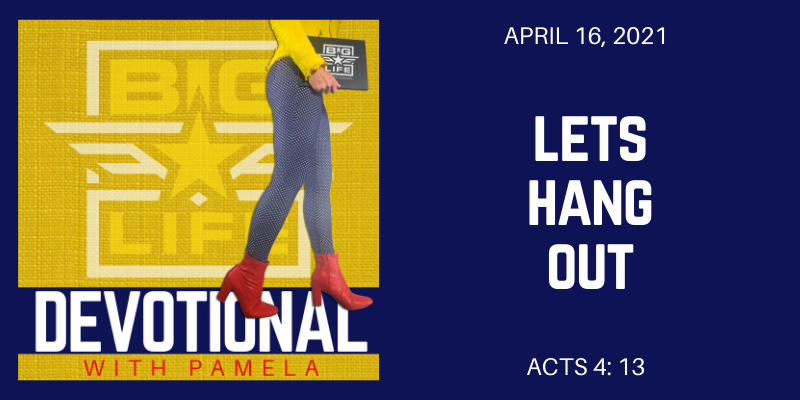 Who are you hanging out with? Remember yesterday’s episode about space … who’s been getting space in your life? Is your time with them taking you further down the path to becoming your best self, or leading you off the path on a dangerous detour? Oh yes, show me the people you’re hanging out with and I’ll show you your future. Isn’t it important to stop and ask yourself if that’s what you really want?

Peter and John hung out with Jesus. They were among his closest friends. Because they hung out with him, they became more like him. In Acts chapter 3 we read of them healing a lame man in the name of Jesus Christ. As a result of this one person being healed 5,000 men came to believe in Jesus that day. Peter and John had done a good thing, the right thing, and then a bad thing happened to them. They were thrown in prison.

Hey listen to me sister, just because bad things are happening in your world right now doesn’t mean you’re on the wrong path. The very troubles around you may very well be a sign that you are doing a darn good job. The enemy doesn’t attack things which are of no threat to him. So don’t you be discouraged. If God is on your side, who can be against you? Ask God to help you differentiate between problems which are the result of being on the wrong path, and problems which are the result of doing the right thing and now being under attack. These problems can appear the same so be sure you’re asking for wisdom. When in the middle of problems here’s a powerful, simple prayer, “God, if this is problem of my own wrong doing, please show me a different way. If this is a result of doing the right thing, please give me courage to keep going.”

The disciples of Jesus spent a lot of time in prison. They were constantly under persecution for doing the right thing. God gave them courage to keep going. So here Peter and John are in prison after doing nothing more than healing a lame man and then helping lead 5,000 men to believe in Jesus in one day. That’s really good day that ended real sucky. But God was still working!

The rulers questioned the disciples and in Acts 4:13 it says “When they saw the courage of Peter and John and realized that they were unschooled, ordinary men, they were astonished and they took note that these men had been with Jesus.

Does God hang out in your house? Is he invited into your everyday living? Is there space for him? Are you hanging out with Jesus today?

I have a group of listeners who are high school and college students. I’ll be honest they’re kinda my favorite listeners because they reach out to me on Instagram and send me messages telling me about the exciting changes they’re seeing in their lives. They’re searching for God. They’re listening to this devotional every day. They’re seeking God and his plan in their lives. As a result, you know what is happening? They’re changing. These young ladies are truly changing. Their thoughts are changing. Their hearts are changing. They are stepping into the future God has available for them. And how is all this happening? Well there’s no magic formula here, they’re just hanging out with Jesus. They’re seeking him. And as scripture promises, when we seek, we will find.

By Lonnie|April 16th, 2021|Categories: Devotionals, Podcast|Comments Off on 837 Lets Hang Out