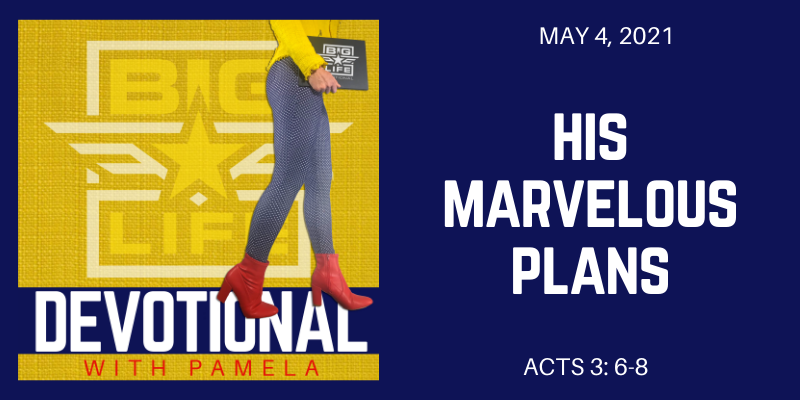 You used to dream of something, but it never happened. Your prayers were once centered on a specific request, but with the delay came your resignation of believing things would ever change. You once believed. You once hoped. You asked. But nothing. So you moved on with your disappointment, accepting this is all there is for you in this life.

BUT WHAT IF THIS ISN’T IT?

I think of the story of Abraham with his son Issac, preparing for a sacrifice. His son, whom he had spent his whole life waiting for would be the sacrifice on the alter. But at the last minute God provided a ram as the sacrifice. You see, God wasn’t asking for Abraham’s dream to be sacrificed, he was only asking for a surrender.

There was a man who was born crippled who for 40 years being crippled was all he knew. Every day someone would carry him to the gates of the church where he would beg. This was his life. It was all he knew and all he had grown to expect. But one day everything changed for him. A day when he wasn’t expecting anything different than any other day where he lay begging. On this day, two men named Peter and John who had been hanging out with Jesus walked by him. The crippled man begged for money, but that day he would receive so much more than money.

Acts 3: 6-8 “Then Peter said, “Silver or gold I do not have, but what I do have I give you. In the name of Jesus Christ of Nazareth, walk.” Taking him by the right hand, he helped him up, and instantly the man’s feet and ankles became strong. He jumped to his feet and began to walk.”

It was the most unexpected thing for this man. He had given up all hope of things ever changing for him. He had resigned to the life of laying on the ground and begging, but God had so much more for him.

And the same God who did the impossible for this man, can do the impossible for you. For 40 years he never saw change … how long have you been waiting? Your wait has not disqualified you. This isn’t over. No, not with a God like yours!

Honey, is there something you’ve given up on? What is it? What is it you’ve dismissed as too far gone, too late, and too hard to ever happen? If God can make a man who was crippled for 40 years to rise and walk, don’t you think he can do something pretty darn awesome for you?

Maybe you’ve given up on something God still wants to give you. You’ve stepped down when God only asked you to bow down. I know it’s a whole lot easier to just give up than it is to keep hoping, but have you given up on an unlimited God who has the power to do more than you could ever ask or imagine?

This crippled man laying at the gates of the church had likely given up on life ever looking any different for him. But he was wrong … soooo wrong. Life was about to radically change in every way with one encounter. And you think for some reason your life is beyond changing? You think your situation is too far gone? You think it’s too late for anything different now? Girl, you’re wrong! God can still work here. God can still do it.

What if God is fully prepared to give you something you gave up on a long time ago? What if now is the time? But what if it doesn’t look like what you dreamed it would? What if he works in the most mysterious ways you never imagined, but it will bring you to that which you used to hope for. Would you trust God with this?

You sacrificed it, gave up on it, killed it and walked away dismissing yourself from the dream, but God is here breathing new life into that dream only asking for your surrender of it.

God, I will not give up on you. I will never give up on the miraculous work I know you can do. I will surrender my every dream and trust that you are working in the unseen during this darkness. I will trust the wait.

May all that is possible but so NOT probable be revived within you. May the breath of God be breathed into that which you have given up on. May the day come when you look back and see all your mighty and loving Father was doing on your behalf while you waited, and may it be better than anything you could have ever imagined.

Ephesians chapter 3 in my Bible is titled “God’s Marvelous Plans”. Woah girl … have you ever thought of God’s plans as marvelous? He has marvelous plans for you. But to be marvelous, it has to be so extraordinary that it causes wonder. You’ve been wondering what the heck God is doing, and that wonder is the perfect set up for his marvelous plans specifically for you.

Within this chapter of the bible is a prayer. A prayer perfect for you as you have this dream that’s taking way too dang long and been way to hard to hold on to. A prayer over the dream you’ve maybe given up on, but God still has marvelous plans to give you.

I pray that from his glorious, unlimited resources he will empower you with inner strength through his Spirit. Then Christ will dwell in your heart through faith. I pray that your roots will grow down into God’s love and keep you strong. And may you have the power to understand how wide, how long, how high, and how deep his love is. May you experience the love of Christ, though it is too great to understand fully. Then you will be made complete with all the fullness of life and power that comes from God. Now all glory to God, who is able, through his mighty power at work within us, to accomplish infinitely more than we might ask or think. Glory to him forever and ever! Amen.

By Lonnie|May 4th, 2021|Categories: Devotionals, Podcast|Comments Off on 849 His Marvelous Plans