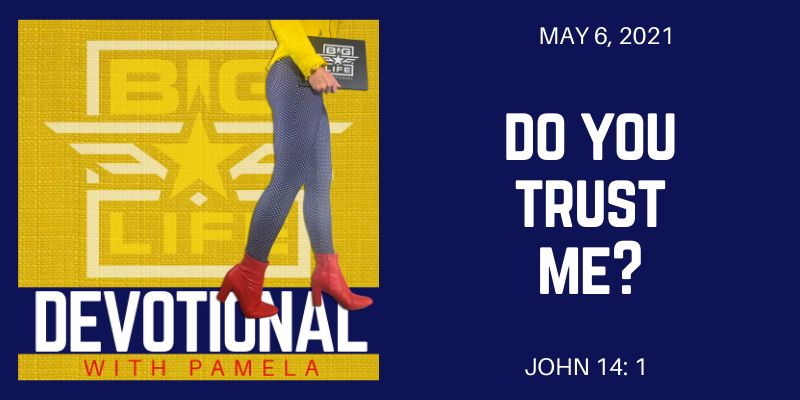 God wants to know, will you trust him?

Last month I hosted the BIG Life Ranch Adventure Retreat. 100 women gathered for unknown adventures. They didn’t know all the plans I had for them. The truth is, some of them wouldn’t have shown up if they would have known. Some things are best kept secret. They came to find out when I asked the question “do you trust me”, I was about to challenge them to do something really hard, really scary, or far outside of their comfort zone.

I led them on a tour of the ranch. It was raining and 50 degrees. They faithfully followed with their little rain jackets and umbrellas, huddled together and shivering. I giggled because I knew exactly where I was leading them, and shelter from getting wet wasn’t part of the plan. I took them to the edge of the spring fed river where the water is deep and frigid year round. We gathered there for a group photo, and then I said “do you trust me?”

Sweet little souls just excited to be at retreat and finally meet shouted “yes!” They had no idea the invitation of adventure that awaited them. I took off my rainboots and jacket and said, “if you trust me, follow me.” You could literally hear the air escape their lungs as they gasped. Yes, we were going in that water. We would begin retreat with a Polar Bear Plunge.

The women who jumped experienced a level of impact others could not. Trust does that to us.

Today, you may be standing on the edge of something so totally uncertain. In fact, you may have been standing here for a really long time. How much longer will you stand there and wonder? How much longer will you think about it? Are you going to do this or not? Will you trust if God has brought you here to the edge, there is purpose in the jump. This will change you. Trust him here.

I remember the day 9 years ago when I felt God tell me to host my first devotional call. Yall when I say I was unequipped to do this, you don’t even know. I couldn’t say the name Jesus without crying. I was an emotional wreck, I didn’t know any scriptures, and I honestly had never even done a devotional for myself, so what exactly was that supposed to look like? I was certain God had made a mistake by choosing me, but when he asked if I trusted him, I decided to say yes. Yes, I’ll trust you for 1 week. I’ll do this for 1 week and then you’ll see I’m not your girl.

So I jumped. After I jumped, I discovered I’m made for these waters! But I would have never known without first trusting and jumping scared.

God has a way of calling the unequipped, then equipping them after they answer the call. You’re taking inventory of all the reasons you can’t, and God says you only need one thing to get you to the point you can … just TRUST HIM.

Jesus said in John 14:1 “Do not let your hearts be troubled; trust in God, trust also in me.”

When Jesus said this to his disciples, he was preparing them for what was ahead. He was going to be crucified. Everything they had stood for and worked for with him, would appear to be defeated. They would question. They would hurt. They would suffer. But Jesus knew what they didn’t know. There was a greater plan at work. He’s basically saying, “this is going to suck, but trust me, after it sucks I’m going to show you something even better.”

Honey, you will have every reason to doubt. You will not understand what is happening in your life sometimes. Nothing will make sense. But do not let your heart be troubled. Don’t lose hope here. Trust God. He know exactly what he is doing and what he is doing is ultimately good.

When God called David to rise up and be a champion, David had every reason to dismiss himself from the mission. He could have easily sat on the sidelines, shook his head at what was happening, and like everyone else, done absolutely nothing to change it. He could have stood there waiting to be better equipped. But instead he showed up exactly where he was, with what he had, and did what he could do to take down the threat.

The giant named Goliath had been threatening for 40 days, and for 40 days no one would even try to do anything to take him down. But little shepherd boy David trusted God enough to show up for the battle and step in the middle of the unknown. And the rest is history, a slingshot and a rock defeated the giant, and he came crashing down.

What giants could fall in your life if you trusted God enough to show up and fight? What victory awaits when you decide you no longer require all the details and just give up control?

Trust isn’t supposed to be easy. You don’t learn anything by cheap and unremarkable trust. If I would have lead those women on the retreat to a pillow and said “Do you trust me? Okay, lay down your sweet head and take a little nap honey I can see you’re tired”, that wouldn’t have shown them all they’re truly capable of. That wouldn’t have built their confidence, strengthened their resolve, and created growth. They had to be lead to something hard, something they would have never done on their own, something they never planned for. That’s trust! And those that trusted will never forget the growth they experienced.

So, he allows the hardship. He stands by in the trial. He is silent in the darkness. He lets the enemy get close. He permits the storm to rage. All so that you learn to trust him. So that you discover what he has put within you. So that you find confidence in who he created you to be. So that you see His hand at work and you never, ever doubt again that it was indeed Him.

God is proving himself trustworthy and he’s proving who you can be through Christ. Trust him here. He knows what he is doing.

You do not know the plans God has for you, but He does. If you knew, you likely wouldn’t show up. So it’s kept a mystery. Following him isn’t easy and it is very uncertain. But God can be trusted. He is trustworthy. He has an invitation for you to follow him on this adventure, step into the unknown and see his power at work in ways you never imagined. I really hope you go for it.

By Lonnie|May 6th, 2021|Categories: Devotionals, Podcast|Comments Off on 851 Do You Trust Me?