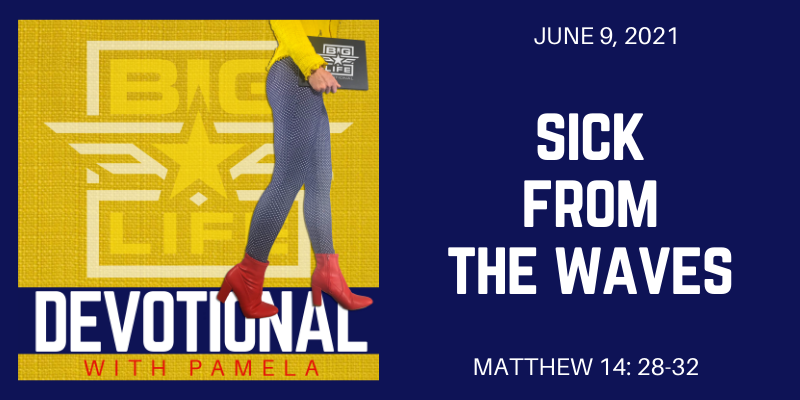 How long will you be unsettled over what has already happened? Will you miss the peace of today because of the disturbance of a yesterday that has already passed?

Our human bodies are so intricately made that they have survival mechanisms built in controlled by our subconscious. We don’t think about how to balance, our brain just goes to work balancing us since we first learned to do it at 1 year old. But what if this amazing gift of adaptation our creator has given us must be managed? What if our ability to adapt has prohibited us from seizing what is here now because we’re still reacting to what happened before?

I was on a houseboat for 11 days. The first few days I had to adapt to the movements of the boat. The sway caused by the water eventually became my new normal and I no longer noticed the movement. I was perfectly fine … until I got off the boat. I have spent the past 2 days literally spinning with motion sickness because what I got used to abruptly stopped. If the 4th floor of this hotel room in Georgia is swaying, I’m in trouble. I know it’s not, but my body still feels the motion of the boat which I got used to.

Honey, maybe you were in a storm, God came in and calmed that storm, but you’re still living in turmoil because it’s what you got used to. You adapted to the trouble, you learned to live with the problem, but have you paused to see if the problem is even still present? Have you stopped to consider maybe the negative you became accustom to is no longer present, but you’re still responding to the negative as if you’re still in the middle of it. Now, you’re creating a wave of problems where there should be peace because you don’t know how to step onto the solid ground here for you today.

Sadly, some of us have learned to dwell in chaos. We’ve learned to sit in continual worry. We only know how to wake up to conflict. It’s as if it follows you into every stage of life, every new job, and each new relationship. Look around sister, you are the common denominator here. And when you understand you’re the common denominator in the continual chaos, aren’t you left to wonder if maybe you’re creating some of it? Maybe you’re stirring this up?

Here I am standing in the shower of a perfectly still building, swaying. It’s not the building’s fault. The contractor, the manager and the maid are not to blame. I’m swaying because of what I just walked out off, but I’m still reacting to it.

What is it you just walked out of, but you’re still reacting to?

You walked out of one bad relationship, but now you may be ruining a good one because you’re still reacting to what was before. One person did you wrong, now you assume everyone could do the same, so you’re continually reacting in old ways recreating a cycle of sickness.

It’s not the storm that will take you out, it’s your focus on the storm. It’s your diverted eyes from Jesus. It’s your assumption that what you went through will determine what is ahead. It’s your continual reaction to what already happened that disturbs the offering of peace today.

Remember the story of Jesus walking on water to the disciples boat in the middle of a storm? Remember the one brave follower of Jesus who got to walk on the water with him? Matthew 14: 28-32:

“Lord, if it’s you,” Peter replied, “tell me to come to you on the water.”
“Come,” he said.
Then Peter got down out of the boat, walked on the water and came toward Jesus. But when he saw the wind, he was afraid and, beginning to sink, cried out, “Lord, save me!”
Immediately Jesus reached out his hand and caught him. “You of little faith,” he said, “why did you doubt?”
And when they climbed into the boat, the wind died down. Then those who were in the boat worshiped him, saying, “Truly you are the Son of God.”

May we learn to face the fear and go afraid! Go uncertain. Go feeling unequipped. Go with the mental chatter that tells you you’re not good enough, and dare to see that God has already made you more than enough. You will never know what is possible if you just sit there making your fancy 5 year plans in the boat.

I love that the Bible records Peter actually sinking out on the water. It shows us that we too will sink sometimes after bold and courageous acts of faith. That’s normal. It’s normal to still need Jesus. Never stop needing him. I promise he will never stop rescuing you.

Notice it says “when they climbed in the boat, the wind died down. Then those who were in the boat worshiped him.” So many of us have climbed back in the boat, and the wind has died down, but we’re stuck in reliving the fact that we almost drowned. We’re so busy retelling the story of how darn bad it was that we’re forgetting what we’re supposed to do. We’re supposed to be worshiping him.

If we retell the story, let it be a story of how he rescued us. How he came when we called. How he did the impossible on our behalf. How he was faithful, even when we wavered. NOT the story of how bad it was. How dark the night was. How tall the waves were. How little the boat was. How no one else in the boat would do a darn thing to help you. How you were out there on the water without an oar.

My friends, that’s how we get caught in a storm that has already passed. That’s how we forfeit the peace that was destined for you today. That’s why you stay stirred up and exhausted … because you’re stuck in a storm that Jesus already saved you from, but you’re reliving the wrong part.

Maybe you’re already on steady ground, but what happened before still has you swaying. That’s normal, but don’t allow yourself to get stuck in that pattern. Look up. If you’re not in that storm anymore, stop reliving it. God has created a firm foundation for you to stand here. And with that firm foundation, he once again extends his hand and asks if you are ready for what he has for you next. Are you ready for the next impossible he will make possible?

By Lonnie|June 9th, 2021|Categories: Devotionals, Podcast|Comments Off on 875 Sick From the Waves