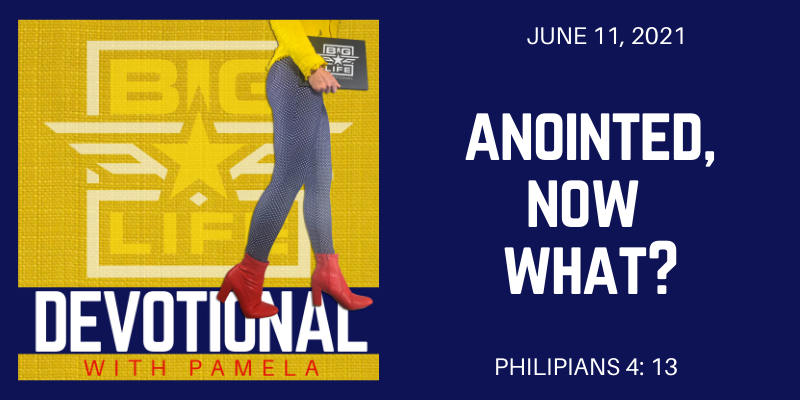 But here’s the thing about being anointed, it doesn’t make it easy. We foolishly assume walking in our anointing will mean it’s an easy stroll with little effort … and we would be sorely wrong. Being anointed would instead mean questioning every step you take along the way, wondering if you’re doing it right. It would mean battling the little voice inside that continually tells you you’re not good enough. It would mean being attacked by the inner critic that tells you you’re a fraud and imposter. It would mean sometimes being tricked into giving less than your best effort and then feeling shame and regret over it. But then, after all this, it means you are strengthened and empowered to get up the next day and try again.

And that’s just the crazy crap going on inside your head … let’s talk about what goes on around you. When you’re anointed does that mean everyone else recognizes it? Does that mean others celebrate what God is doing in your life? Does that mean success follows you everywhere you go? Oh girl, if that’s what you’re waiting on to confirm your anointing, you’re surely going to miss it.

Others often don’t recognize God’s gifting in your life because they’re too busy trying to compete with it. They’re threatened by it, so they attack it. Anointing doesn’t mean instant success, it means surviving the attack against all odds and somehow having the strength to keep going. It means slow progress and hard climbs. It means gradual increase after a series of setbacks. It means discovering God’s unmatched ability to use all things for good, even the unimaginably bad things.

Just because you are chosen and divinely equipped, does not mean it will be easy for you. Don’t confuse ease with purpose. Purpose is not easy. Purpose is a life-long pursuit of resisting the temptation of the easier way, and instead opting for the way with greater impact. Purpose is digging deep and diving in. Purpose is wholeness that comes first from brokenness. Purpose is trusting hard seasons will pass, and good seasons won’t last forever, so make the most out of each one.

If you’re seeking ease, you will miss the anointing on your life. If you’re seeking comfort, you will forfeit the power God has offered you. Living up to the potential the Almighty has put within you will require more grit and consistency than you even believe possible for you at this point. But remember, our God is the God of the impossible. Daily He will strengthen you to do that which you still believe is impossible. Why? Because you’re anointed.

Being anointed doesn’t mean you stop hearing those voices … it means you learn to stop listening to them. You learn to take action before you feel like it. You learn taking the next step is the only way you turn the voices down. Action drowns those voices out. Sitting in your feelings of dread and overwhelm only allows defeat. Girl, don’t dwell there. You’re anointed to move forward.

So many of us miss our anointing to do great things with our life because we’re waiting on feelings to confirm it first. We’re waiting on the easy way to appear and the guaranteed winning door to open. Walking in your anointing requires faith with each step, because while anointing comes with power to do incredible things, you will likely never feel like you can do those incredible things before you actually start doing them. Like EVER.

You may be anointed to raise your child, but waking up to another day with all their exhausting needs doesn’t feel anointed, does it? You won’t realize the strength you have to do exactly what needs to be done today in supernatural ways until you’re actually doing it!

You may walk into a conversation that you feel totally unequipped for, until your anointing has you speaking truth and love in a way you know you’re not capable of on your own. If you were banking on your feelings of adequacy, you would have avoided that conversation, but now here you are in the middle of it saying things the Spirit is prompting you to say.

I’m just an ordinary country girl, originally from an itty bitty town in Missouri. I was the nearly 6 foot tall girl who became a cheerleader because basketball required running. And I was the cheerleader who couldn’t do a cartwheel. I’ve never been great at anything. I have nothing more than a High School degree and 9 years worth of experience waking up every morning and sharing a few stories about Jesus in my simple and humble way. I don’t always get it right, I mix up scriptures sometimes, I make up my own words a lot, I crack myself up with jokes no one else gets … and I’m here to tell you I’M ANOINTED TO DO THIS!

But once again today I felt like I couldn’t do it. I struggled to get started. I battled with the urge to go back to bed. I feared failure. I felt like an imposter.

God may have made you to be the best hole digger around, but you can’t stand there with a shovel and pray for a hole. This is a partnership. God equips and anoints you … then the rest is up to you. Dig or don’t.

Philippians 4: 13 ” I can do all things through Christ who strengthens me.”

God’s daughters don’t have it easy, they have it ANOINTED. They are strengthened to do what is natural in supernatural ways. They are called to acts of goodness and equipped to do exactly what needs to be done as they are showing up and doing it.

You are anointed. You are appointed. You are highly favored. You are predestined for victory, which means there will most certainly be a battle. Don’t be shocked by it. This won’t be easy, but it will be worth it. Walk in your anointing and move toward the life which God created you for.

By Lonnie|June 11th, 2021|Categories: Devotionals, Podcast|Comments Off on 877 Anointed, Now What?