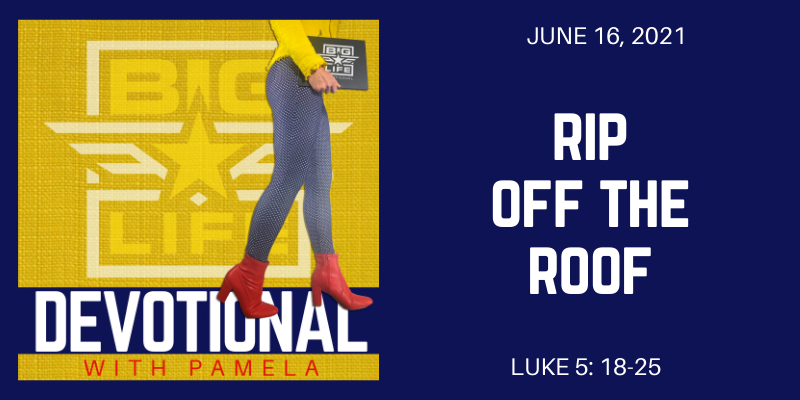 Something caused you to stop … and what if that something can totally be blown out of the water today? What if your limitations could be removed and you were given permission to do things that seemed a bit ridiculous to keep moving toward the life God has for you?

Matthew, Mark and Luke all 3 tell us the story of some men who were desperate enough for the power of Jesus that they dropped excuses and overcame limitations. They broke a few rules, caused a scene, and left some damage, but it’s what was required to get to Jesus. These men had a friend who was crippled and they knew somehow, someway they needed to get him to Jesus. When Jesus was in their town they went to their friend and put him on a bed and began carrying it.

Oh, but often times we just want friends who will wallow with us. Friends who will co-sign in your misery and show up for your pity party. Sorry, I won’t be that friend with you. I love you too much to see you waste what God has put within you. I know how darn precious this single day of life is and I won’t willingly watch you waste it waiting for a better one to come. I’m gonna drag your butt to Jesus. I’m gonna remind you of who you are and who’s you are.

These friends looked up and decided to climb. They climbed the walls of the house where Jesus was, and they somehow hoisted their paralyzed friend on his bed up on the roof with them. Then, they started making a hole through the roof.

Y’all this sounds ridiculous. Read it for yourself Luke 5: 18-25. They’re tearing off the roof of a home that doesn’t belong to them. They’re breaking rules, and they’re not stopping. Eventually they create a hole big enough in the roof and they lower their friend on his bed down to Jesus.

Now just imagine for a moment being Jesus. You’re standing in this crowded home teaching and you know your audience is proud religious law-keepers and teachers of the Law, meaning they are questioning who you really are, judging every word you say. Then suddenly pieces of the ceiling start caving in, and you look up to see these crazy guys standing on the roof, lowering their friend down on ropes through the hole they just tore out. Why because they know who you are, and they believe every word you say!

I imagine Jesus had to smile. In fact scripture says “Jesus saw their faith.”

Isn’t this what he wants of you and I today? To stop giving up so darn easy? To tear the freaking roof off and find a way? To overcome our own excuses, stop caring so much what others will think or say, and seek God no matter what it takes? To believe in who he is and everything he says to the point you’re willing to do ridiculous things.

There will always be someone or something in the way. There will always be something blocking you from what God has determined as possible in your life. Will you give up again? Will you be discouraged and detoured? Will you allow your heart to grow weary here and turn around claiming it’s impossible once again? Or will you look up and see maybe there’s another way? Maybe there’s a roof you can rip off!

God allowed the crowd to gather and the way to be blocked, because he already knew he had equipped them to climb walls and tear off roofs.

Their friend was healed that day by the Almighty. Yes, they had to tear through a roof of a home they didn’t own and they may have had a few damages to pay for, but they got to Jesus.

Get yourself to Jesus! Do whatever it takes to fight your way through the crowd. Climb some walls and rip off some roofs. Sometimes you have to stop waiting for permission of others and just decide you’re seeking God and you’ll ask their forgiveness later. And most of the time the person you need to stop asking for permission is YOU. You’ve been holding back because you’re afraid it might be hard. It might cause a little pain. It might be uncomfortable. It might take more work than you’re willing to show up for. It might cost you. It might take longer than you’re prepared for. So, you’re waiting for permission from yourself. Screw that … this is the one and only life you get and God has called you to do something with it!

You have no time to waste here. Who are you trying to impress and why are you trying to constantly make it easy? You’ll never know what God says is truly possible in your life if you wait around for clear paths and open doors. Climb that wall. Tear off that roof. Get yourself to Jesus and let him do the impossible!

By Lonnie|June 16th, 2021|Categories: Devotionals, Podcast|Comments Off on 880 Rip Off the Roof