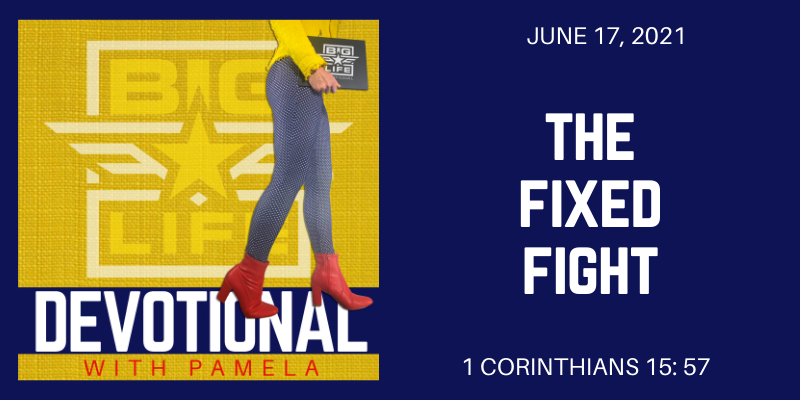 Showing up for a new day of life is sometimes like stepping into the ring for another round of fighting. Is that the way your life feels right now? Like a continual battle and you’re worn the heck out? It’s one hit after another and you can barely hold your hands up at this point.

My friend was sharing with me yesterday her life is like a scene out of the movie Step Brothers right now. Her 19 year old step-son has moved in with her 14 year old son and they legit have bunk beds and already had to get rid of the drum set. Then I cracked up because they just bought a boat, and if you’ve ever watched the movie you know where that could end up. They should just start a YouTube channel now. Oh mercy, life can be a crazy battle.

I don’t personally like battles. I’m a professional avoider of conflict. I just want everyone to be happy and play nice. I will crawl right under a table if people start acting unhappy. If you debate me, you will always win. If you challenge me, I will happily hand over the crown. To a fault, I avoid conflict, and if I’m not careful there are entire seasons of my life I can check out on because they’re just hard. I miss opportunities of growth and increase because I don’t want to endure the resistance.

I’m not a fan of boxing or MMA or UFC. But I heard there was a big fight this past weekend on Pay Per View. And I heard there was a lot of discussion on the fight being rigged. I couldn’t tell you who won, but I know who a lot of people thought should win, didn’t win, and fingers are pointing at someone buying off the fight.

Now wouldn’t it be reassuring as you step into the ring for another round of battles in your life today, that your fight is fixed and no matter what, you’re the pre-determined winner here? Whew, wouldn’t that take just make this battle more tolerable? To be guaranteed the win in the end.

Well girl, let me tell you something, THAT IS EXACTLY WHAT HAS HAPPENED FOR YOU! Someone has come in and bought out your fight. Someone has paid a high price for your guaranteed victory. That someone is Jesus!!!!!

Oh if you really think about it, it’s quite scandalous. The grace of God gives you victories you don’t deserve. He covers you in crowns you could never earn. He holds your hands up and declares you the winner over battles where you were outmatched, but still you come out victorious.

Your fight has been fixed. Jesus bought this out for you.

1 Corinthians 15: 57 “But thanks be to God! He gives us the victory through our Lord Jesus Christ.”

Where is your battle? Where is your impossible? What is your current hardship? What has been breaking your heart and causing discouragement? Go ahead and just put it on the table right now. What has you worried? Where is your stress? Where is there darkness and uncertainty? Where has the enemy been attacking you with insecurity and anxiety?

Ahhhhhh sister, that fight has been fixed. It’s already been bought out. Jesus paid for your victory in this!

Jesus said in Luke 10: 19 “I have given you authority to trample on snakes and scorpions and to overcome all the power of the enemy; nothing will harm you.”

You may not deserve the victory, but thank God we don’t get what we deserve. Thank God his grace is bigger than our track record. Thank God his love covers every shortcoming we have and makes us whole.

Show up for your battle today. Confidently step into the ring for another round. When you get knocked down, you get yourself back up girl. Why? Because there is a victory here for you.

Go ahead and blast the song “Breakthrough” by Red Rocks Worship today:

Shake the mountains, break the walls apart
Open the Heavens, Almighty God, You are
Overcomer, Defender of my heart

By Your power, the oceans open wide
Your fire falls down, Heaven and Earth collide
King Jesus, forever by my side

On the cross Jesus cried out “It is finished.” What was finished? His battle for you. His full payment for your victory. The price of grace that would cover you fully. Righteousness was perfected. Divine justice was satisfied. Blood was shed, redemption was paid, sins were forgiven, reconciliation was achieved, death was conquered and salvation was secured. It was finished right there for you.

Now today, step into your ring with confidence and show up for the fight that’s already been secured for you. Sure the odds are stacked against you, and you may lose a round or two, but this fight has been fixed and you will win here. King Jesus is on your side.

Guaranteed victory is yours!

By Lonnie|June 17th, 2021|Categories: Devotionals, Podcast|Comments Off on 881 The Fixed Fight