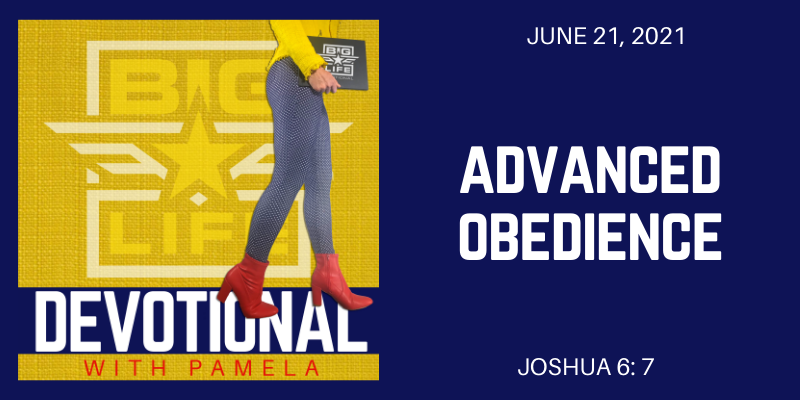 Do you desperately need a breakthrough? You’re tired of being stuck here and you’re ready to move forward. You’re seeking that next phase and new season, yet nothing seems to be changing. It’s as if there’s this wall of resistance and you’re trying to break through it to the other side.

How do you get that big breakthrough? How do you burst through that which is standing in your way? How do you step into change and leave behind all that has been holding you back? And how do you bring your family along for that breakthrough?

The Bible gives us an example of breakthrough. It tells us the steps of change. But I’m warning you now, you’re probably not going to like it. It’s not the ‘ah-ha’ you’re hoping for, but it’s the ‘ah-ha’ you need.

The story is of the Battle of Jericho. You likely know it because it’s totally ridiculous. It makes zero sense. Ahhhhh, what if that’s the point?

Joshua was leading the Israelites and they came upon impenetrable stone walls protecting the city they were there to take, a city called Jericho. These walls were impossible to climb and had no points of entry. But God gave the leader a battle plan.

Joshua 6 “Then the LORD said to Joshua, “See, I have delivered Jericho into your hands, along with its king and its fighting men. March around the city once with all the armed men. Do this for six days. Have seven priests carry trumpets of rams’ horns in front of the ark. On the seventh day, march around the city seven times, with the priests blowing the trumpets. When you hear them sound a long blast on the trumpets, have the whole army give a loud shout; then the wall of the city will collapse and the army will go up, everyone straight in.”

Wait, what? This doesn’t make any sense at all. What kind of battle plan is this? March around impenertable stone walls playing music for 6 days, then on the 7th day march around 7 times. There’s no explanation as to HOW this is going to work. Marching around walls and yelling at them doesn’t typically result in anything major happening. But this is the battle plan God has given, whether it made sense or not.

The key is Joshua’s response to this battle plan. Joshua 6: 7 “And he ordered the Army ‘Advance!”

This is what we need to tell our worried hearts and troubled minds. Advance! Move forward. God is making a way, but the way won’t be found by sitting here wallowing in this mess. God expects us to show up and advance.

God IS going to do something here my sister. In fact, he already is. He’s doing things behind these impenetrable walls you can’t see. He’s working in the unseen and moving in the unknown. You have no idea what he is doing as you march your circles. You have not yet seen how his power is at work on your behalf.

We don’t know why or how the walls actually fell. Some believe it was an earthquake. Does marching in circles cause earthquakes? No. Does blowing horns and shouting cause a great collapse? No. But advanced obedience causes breakthroughs.

Advanced obedience. This isn’t just for super Christians graduating to new levels of faith. This isn’t like Advanced Algebra which only comes after you’ve mastered basic Algebra. We haven’t mastered anything here. Advanced obedience is for ordinary people like me and you who fail on the regular and get it wrong just as much as we get it right. This is for those of us who believe, but still question at times. This is for us with a little bit of hood and a little bit of holy. You know, the people who love Jesus but maybe cuss a little. Not perfect, but made perfect by the Holy One. Advanced obedience.

Rather than super level faith, this is simply obedience that is willing to show up and take the next step. Faith that says, okay let’s advance. Let’s march around this thing again. Let’s keep going when going doesn’t seem to be working. Advance here. Next step taken in obedience.

Joshua told his army to advance, and advance they did. For 7 days they marched. 13 miles later nothing had changed. But God knew breakthrough would come with their advanced obedience.

Here’s what they didn’t know … breakthrough was being planted here. These are breakthrough seeds. Obedience that moves us into action, doing things that don’t result in immediate progress, but show our faithfulness in the process. Seeds that grow to become so much more.

Breakthroughs seem to just burst through out of nowhere, but the truth is, breakthroughs are the result of breakthrough seeds planted in obedience. The little actions that seemed insignificant. The minor things that no one else noticed. The daily habits that would be so easy to just skip. But those are the seeds that grow to become breakthrough.

This is our story of breakthrough. Advance in obedience. Keep moving forward and doing the little things that frustrate you with no seeming payoff. Be faithful here sister. You have no idea what these seeds can grow to become. This is where your breakthrough begins.

By Lonnie|June 21st, 2021|Categories: Devotionals, Podcast|Comments Off on 883 Advanced Obedience