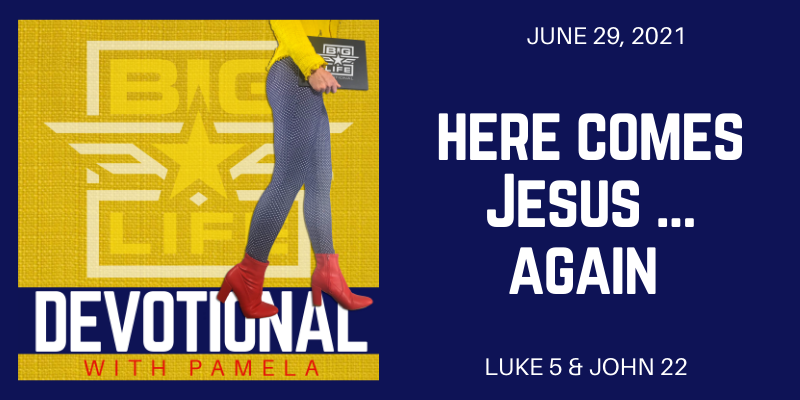 God’s pursuit of us is personal. He thinks of you individually, apart from the crowd, separate from the masses, and zeros in his attention on you. Not because you’re the problem one, the difficult one, or the continually screwed up one, but because you are his beloved one. Your problems do not create a problem for God. Your difficulties do not make it difficult for God to love you. The fact that you continually screw up only allows God to continually show up in your life in such a personal and powerful way.

Here you are again … back to needing God. Back to struggling with things you thought you would be well past by now. You’re wanting to hide. You’re feeling the shame of another failed attempt and another shortcoming. That shame makes you shrink back and dismiss yourself from what God has for you here. But there are two intertwined stories in the Bible that tell me you should run straight toward Jesus again and again and again, as he shows up in the same ways for you over and over.

In Luke 5: 1-11 we read about Jesus walking up to two fishermen who had been fishing all night, but had caught nothing. Jesus asks to use their boat to stand in and teach the crowd. Afterwards, he tells the fishermen ““Put out into deep water, and let down the nets for a catch.” Simon, who is also called Peter, answered, “Master, we’ve worked hard all night and haven’t caught anything. But because you say so, I will let down the nets.”

They caught so many fish the nets began to break. Then Jesus said, leave all of this here and come with me and I’ll make you so much more.

For 3 years Peter followed Jesus. During that time he was part of healings, miraculous feedings, walking on water, but it all ended with Peter denying he even knew Jesus right before he went to the cross. What a failure. What an utter mistake. After all Jesus had shown Peter, after all he had done with him and for him, Peter failed Jesus. Afterwards, he returned to his boat, the boat he had left to follow Jesus 3 years before, and he began fishing again.

Have you ever made tremendous progress, felt dang good about where you’re going in life, been in BFF status with Jesus, then fail miserably? Have you ever fallen off the wagon so hard, you’re laying in the ditch eating dust for months. Heck, maybe you’ve been eating dust for years. Thinking about where you once were and all God had done to help you make the progress you so easily wasted, makes you ashamed.

Oh, I’m pretty sure we’ve all felt that way. If we’ve lived long enough, we’ve known the high of Jesus rescuing us, then the associated guilt when we waste the rescue and end up right back where we were … or worse.

Peter had this amazing encounter with Jesus that began with a miraculous catch of fish. Jesus had changed every aspect of his life, every aspect except for Peter’s free will that continually got him in trouble. Peter’s impulsive mouth and distracted bad decisions still remained. Jesus didn’t change that.

You’ve been saved, you’ve been forgiven, you’ve been redeemed, but there are some things about you that remain and they’re a real struggle. Just like Peter.

What is Jesus’ response to our failure? How does he react to us screwing this thing up with the same darn behavior we swore we would never return to again?

Well, how does Jesus respond to Peter’s repeated failure? His last failure was a complete denial of Jesus that led to his crucifixion on the cross. That’s big failure. You and I have screwed up, but wow Peter took screwing up to a world-class level. He was king of the mountain of failures.

After Jesus hangs on the cross and gives his life. After he goes to hell and takes back the keys. After he rolls away the stone to the tomb and comes out victorious, he goes right back to find his boys again. Yes, his boys, including the one who screwed up.

John 22: 1-22 “Afterward Jesus appeared again to his disciples, by the Sea of Galilee. It happened this way: Simon Peter, Thomas, Nathanael, the sons of Zebedee, and two other disciples were together. “I’m going out to fish,” Simon Peter told them, and they said, “We’ll go with you.” So they went out and got into the boat, but that night they caught nothing.

Early in the morning, Jesus stood on the shore, but the disciples did not realize that it was Jesus.

He called out to them, “Friends, haven’t you any fish?”

He said, “Throw your net on the right side of the boat and you will find some.” When they did, they were unable to haul the net in because of the large number of fish.

(Oh wait, this sounds familiar!!!!! Isn’t this exactly how Peter had met Jesus? Isn’t this what caused Peter to leave behind fishing and follow him the first time? And here it was happening again! Happening again even after all his failure. Jesus had returned to call him back to his purpose again!)

Then the disciple whom Jesus loved said to Peter, “It is the Lord!” As soon as Simon Peter heard him say, “It is the Lord,” he wrapped his outer garment around him and jumped into the water. The other disciples followed in the boat, towing the net full of fish, for they were not far from shore, about a hundred yards. When they landed, they saw a fire of burning coals there with fish on it, and some bread.

Jesus said to them, “Bring some of the fish you have just caught.” So Simon Peter climbed back into the boat and dragged the net ashore. It was full of large fish, 153, but even with so many the net was not torn. Jesus said to them, “Come and have breakfast.”

Although Peter knew he had messed up, knew he had returned once again to his old ways even after his radical encounter with Jesus before, when he saw Jesus again, he jumped out of the boat and swam to him. This is exactly what we should be doing girls! Jesus is here once again showing up to strengthen us, rescue us, restore us, renew us, redirect us and instead of jumping out of the boat and swimming toward him, we hide in the dark corners of shame and guilt and hate ourselves a little more for once again needing Jesus.

You consider it a disgrace that God has to save you in the same way again. But do you see Jesus frustrated that he is having to show up for the 2nd time after a night of unsuccessful fishing to bring a miraculous catch? NO! He chose to show up and do it again. And he chose to do it again after an epic failure.

So here’s Jesus showing up for you again. This is all familiar. You’ve needed him before and he did the impossible for you. You didn’t waste what he did for you in the past just because you need him again. He knew you would fail again before he ever saved you the first time. This isn’t a problem for him.

Step out of those dark corners of shame and guilt and run right towards the Jesus who has once again shown up for you. He doesn’t see your failure, he sees your future. He isn’t detoured by your problem, he is fixed on your purpose.

Yes, he rescues us in the same ways over and over again. He always shows up for Peter after a bad night of fishing. And he always shows up for you after the same thing you struggled with before. Accept his help here. Don’t sit there in your boat reliving how you wasted your last opportunity to overcome this. Jump into the arms of Jesus and get on that shore where he has breakfast waiting for you!