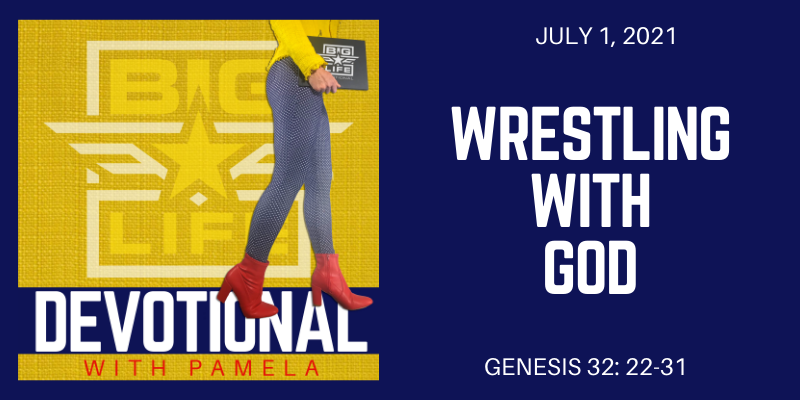 Have you ever wrestled with God? Struggled to understand what he’s telling you? Fight to figure out what he’s doing? Maybe a little argument, a confrontation with the Almighty? Oh who are we to argue with God, but isn’t God big enough to handle our struggle to understand?

Yesterday morning I turned on the camera to record the devotional so members of BIG Life Mentoring could watch live as I hosted. To my surprise when I saw my own image on the screen, my hair resembled Jim Carrey’s in Ace Ventura. I had embarrassing, big poofy horns of hair. I didn’t start out that way. I had braided my hair earlier in the morning, but then I was wrestling with God.

While writing yesterday’s devotional, I was struggling to understand what God was trying to tell me. I was fighting to figure out where he was leading me, as nothing seemed to fit together. I had been sitting with my head in my hands, fingers dug deep in my braids just above my temples, trying to hear what God was saying. We were wrestling.

My sister, if you’re not wrestling with God, maybe it’s because you’ve settle for a surface level relationship. When you go into a deeper relationship with God, let me tell you, it becomes real apparent God doesn’t make sense! His ways are NOT our ways. His thoughts do not align with our thoughts. His plans wreck our plans.

If God would have wanted a robot, he would have created robots. Instead he created me and you with our flaws and our questions, and he invites us into this relationship where things won’t make sense to us, and he says ‘Believe in me. Trust me. Have faith in me. Let’s wrestle this out and I’ll show you my goodness.”

The Bible tells us about Jacob who gets in a tussle with God. They battle it out through the night and Jacob limps away with an injury and a blessing. To understand the story in Genesis 32: 22-31, you must first understand who Jacob was. Jacob was a liar and a cheat. He was unfair and ruthless. He manipulated people for his own success and conned others into his way. The name Jacob means “deceiver”, and that is exactly who he was. Now people were after him. His past had caught up with him and he feared for his life. That’s where he encountered someone who battled him the entire night. In the dark, they wrestled. Jacob refused to retreat, until finally the one he was fighting with dislocated his hip. His opponent said, “let me go, it is daybreak.”

Jacob replied, “I will not let you go unless you bless me.”

The unseen man whom he had fought with the entire night then asked his name. Jacob, he says. And then he received a new name, the name of Israel, meaning “he struggled with God’ and realized he had been wrestling with God all night. There he was blessed.

The man whom God would chose to be a leader and build a great nation had wrestled with him. He chose to bless the one who had battled it out with him.

Jacob did what we all must do. He confronted his failures, his weaknesses, his sins, his questions, his doubts, and faces God. Jacob wrestled God all night. It was an exhausting struggle that left him crippled. And it was only after he came to grips with God and stopped struggling, accepting the fact that he couldn’t do this without him, that he received God’s blessing.

Our lives were never meant to be easy. Just because we struggle doesn’t mean God isn’t working. In fact, the struggle is often where God works most. True growth always involves struggle and pain, resistance and delay, failure and frustration. We have to wrestle this out. And honestly, wrestling it out is highly uncomfortable for me. How about you?

One of the most powerful moments in my life is when I finally confessed I was angry at God. I was angry for the hardship he was allowing in our lives. I was angry for the unfolding of what I expected to be a good plan, that ended up being nothing but one disappointment after another. I was angry that our obedience and steps of faith were met with closed doors and struggle. We had no money, a failing business, no produce left in the refrigerator, and down to our final pieces of meat. Then the phone rang to tell me the one deal we had working had fallen through and we had no hope of future money. This was how God provided for his children? I was wrestling with that.

I had held in that anger for months, fearful that wrestling it out with God would cause some sort of lightening strike, but instead voicing my anger and speaking the truth of my feelings resulted in peace like I had never known. God didn’t come in and change our circumstances immediately, but he invaded the cold spaces of my heart with peace that didn’t make sense.

And you know what, we made it through.

God straight up doesn’t make sense to us. We gotta wrestle this thing out.

With one word God could drastically change the circumstances of our lives. With one motion of his hand everything could be different. In an instant it all could be over, it could be better, it could be miraculously changed. But instead our God works in mysterious ways that cause us to wrestle it out. Then we come out changed.

I’m really beginning to understand God isn’t as concerned with our circumstances as he is our character. He will allow us to walk through the fires and see everything destroyed if it means we come out more refined as the person he created us to be.

Go ahead and wrestle with God. He won’t shy away from your questions. He’s not insulted by your lack of understanding or disagreement with the way this is playing out. He can handle your anger. His peace is more powerful than your problem. His grace is greater than your grievance . His omnipotence is bigger than your obstacle.

By Lonnie|July 1st, 2021|Categories: Devotionals, Podcast|Comments Off on 891 Wrestling With God