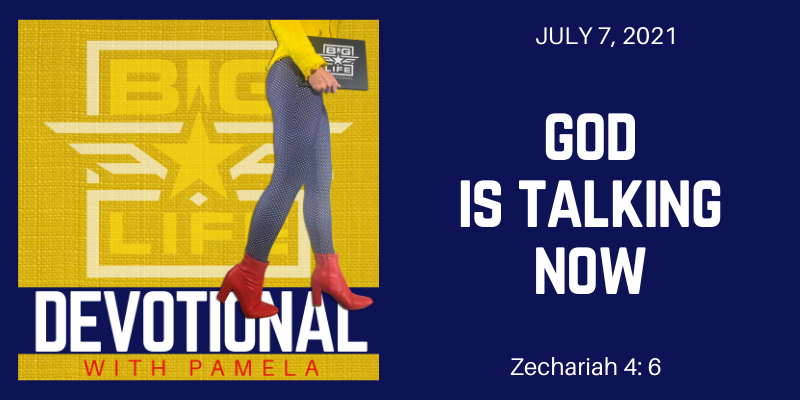 What if it’s neither.

Did you know the Bible only mentions God speaking in a still small voice one time. Just once in all of scripture is that referenced. 1 Kings 19 we read of Elijah standing before the Lord in the mountains after being visited by an angel. A great wind came, then an earthquake, then a fire, but God’s voice was in none of them. Finally after all of this, there was a still small voice that was God.

We want God to speak to us in an unmistakable booming voice, something we surely can’t miss. We want a grand story and poignant moment where we know God is speaking. Heck we want blinking lights and flashing arrows, but what if instead God is speaking in whispers your spirit can’t even hear? What if you’ve been listening for a sound, but his Spirit is doing a moving. A moving within your soul towards that which God wills.

God, I’m not hearing you! And God says ‘that’s because I’m not using my voice, I’m using my Spirit.’

Let me tell you, God can speak however and whenever he wants. But the majority of the time, it’s not in an audible voice. It’s not dramatic. In fact, most of the time I couldn’t even put words to how God speaks because it’s indescribable, but you KNOW. You feel that nudge. You feel that confirmation. You feel that uncertainty within your spirit settle and be still. Yes, that’s it … a settling of your stirred up spirit. A peace no words can explain, when peace doesn’t make sense.

Let’s talk about that. Let’s talk about all the times you’ve known God was guiding you, but you can’t quite describe it. All the times you’ve felt his prompting but don’t know how to explain it. It’s happened to you, but maybe you’ve forgotten about it because there are so many other voices in your world that are much louder, and more exciting things you’ve been chasing after.

Our dog knows the sound of his Daddy. My husband could never sneak up on us because Tank’s tail gives him away before we even know he is near. I won’t hear the truck. I won’t hear his steps walking up the sidewalk, but Tank’s tail starts beating the hardwood floor. He knows Daddy’s coming home. There’s no mistaking he’s here.

Now our dog couldn’t explain why Daddy’s footsteps sound different than everyone else’s, but he just knows. He knows because that’s his Daddy, and he’s learned to continually be alert for him.

Have we learned to continually be alert for our Daddy? Our Heavenly Father has a rhythm. He has a pattern. He has a way of working, and as his children, we are wired to be aware of him.

Jesus promised if we seek we will find. Seeking is an intentional act of listening, looking and searching. It’s an alertness that won’t overlook the details. It’s an expectation to find. It’s KNOWING what you’re searching for is here and can be found.

God is here, and he can be found. He is in the middle of every detail of your life, seek him in those details. He’s still speaking, but he’s not limited to just an audiable voice. Sure, he has a still small voice, but that may not be how he’s speaking to you.

He may be speaking to you through beauty. Let that beauty draw you in and bring you assurance of his love and care for you. His creation with unspeakable beauty on display, yet he says YOU are his most beautiful creation.

He may be speaking to you through coincidence. Yes, those little things that happen that seem like crazy coincidences, yet they are God winks in the details that say every little thing matters to him. Nothing has slipped through his fingers, nothing has escaped his attention. He’s in everything, and he sends a little wink your way to give you a behind the scenes glimpse at his crazy awesome power.

He may be speaking to you through this devotional at this very moment. You’ve been asking why he’s not speaking to you and right here, right now, he’s saying I AM. I’M RIGHT HERE. LOOK AT ALL THE WAYS I SPEAK. I’ve heard you and here I am responding to let you know I care.

You feel like God has been silent, but understand this … divine silence does not mean divine inactivity. Maybe you haven’t heard God, but look around, he’s been active. He’s been working on your behalf. He’s been moving Heaven and Earth for you, and you just don’t know it.

Zechariah 4:6 tells us that God’s works is not by might nor by power, but by His Spirit.” This means these jaw dropping displays of power are not necessary for God to work. We like them, but they’re not a requirement of God’s spirit to be on the move. Loud booming voices, and even still small voices aren’t necessary for God to speak. It’s his Spirit that does the work. It’s his Spirit that does the talking.

To hear that, you must spend time with God. Just as our dog Tank knows when Daddy is coming home before anyone else, we know our Big Daddy is on the scene because of the time we have spent with him. When we study his word and spend time talking to him, our spirit learns to connect with His.

Yeah, I couldn’t tell you how that happens. I can’t explain to you how exactly we know. But this isn’t a head thing … this is a spirit thing. Spirit things require spirit work. And spirit work requires connection. Just allow time with God to build that connection. Then you’ll hear. You’ll know.

Remove the limits from how our unlimited God can speak in your life. Maybe it’s not that still small voice you’ve been looking for. Maybe it’s the calming of your spirit. Maybe it’s a feeling of confirmation. Maybe it’s what others would call a coincidence. Maybe it’s unmistakable beauty. Maybe it’s a nudge. Maybe it’s completely indescribable. That’s God. He’s speaking. Just listen.

By Lonnie|July 7th, 2021|Categories: Devotionals, Podcast|Comments Off on 895 God Is Talking Now