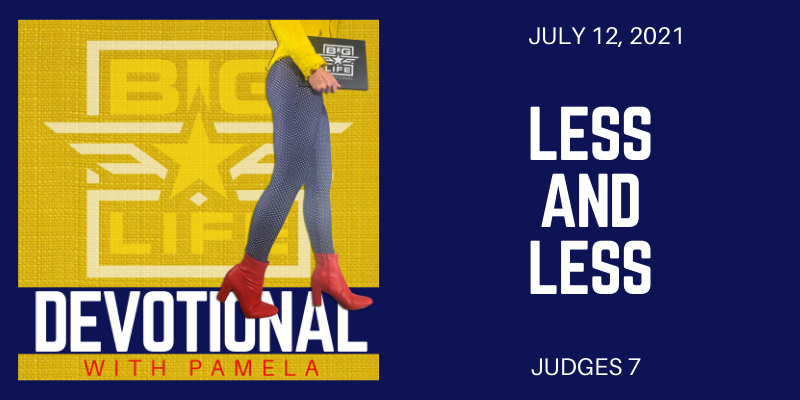 Do you feel like you’re in a losing season? Like all you worked so hard to build is falling apart? Like more is going out than is coming in? What’s up with this … like really? Is God telling you you’re destined to lose? Is he preparing you for defeat? Is he letting you down here, watching it crumble and tumble, and not stepping in to save you?

If this sounds painfully familiar and personal, I’m really glad you’re listening because you need to know … God’s not planning for your defeat here, he’s preparing you for your victory. This is where the arrow is pulled back before the launch. This is where the fire refines and we come out stronger. This is where the excess is stripped and we’re left with the bare minimum. But understand, God never wanted all the extra, he always wanted to get to the core anyway. The excess was in the way. You wanted it, but God doesn’t require it.

Whatever you have lost, understand it wasn’t required. God’s great plan already took into account the details of this hardship. Today has already been factored into your future, and God said “this is all I need!”

It may take faith to look around at your reality and say “this is all I need”, but that’s exactly the solid ground God wants to build on. One thing is required before building a tall structure. Before we build up, we must dig down. Excavation is step one of building. Excavation sucks. It seems counter productive to dig when you’re wanting to build up. But without a deep and firm foundation poured below the surface, all that is built on top will be in jeopardy.

You want to build up. You want to see progress. You want signs this is working, but what you don’t understand is this excavation process in your life of digging and removing is the beginning of it all. This is tremendous progress. Your foundation is being prepared! Get excited here as things are being taken out and less and less is left. It’s all for a purpose.

There was a soldier preparing his army for a great battle. A battle he was destined to win, but the Lord allowed a total excavation of all he had before the victory. We can learn from this story in Judges 7.

Gideon was chosen by the Lord to lead the Israelites into battle against the Midianities. There was one problem, Gideon had 1/4 of the soldiers of his enemy. With only 32,000 soldiers to fight against the people who had held them captive for 7 years, stealing everything from them, it seemed like an impossible battle. But with 32,000 soldiers, already outnumbered by more than 4 to 1, God told Gideon he had too many soldiers.

Gideon thought his problem was the numbers, now God was making his numbers even less.

You’ve been thinking your problem is numbers. You don’t have enough. But maybe, just maybe God is in the process of proving he is all you need, so even less is required here. I remember thinking my problem was numbers too … that’s right before God drastically reduced my numbers even more! It seemed like devastation, now I realize it was just excavation for the foundation.

Gideon told his already outnumbered army that anyone who was scared could go home. 22,000 soldiers left. Now, he was left with only 10,000. It seems his problems just got worse. Fewer men to fight surely meant harder battles to win.

But God said there were still too many soldiers in Gideon’s army. All the men were taken down to the water for a test. If they got down on their knees to drink, they were to leave. Only if they took the water into their hands and drank from their hands were they to stay and fight. From 10,000, only 300 were left.

Now, the Lord says you’re ready for this battle. Now you have exactly what I want you to move forward with. Gideon’s 300 soldiers were facing the Minidianites numbering 135,000. Let’s do the math here. They were originally outnumbered 1 to 4. Now, with God working for them, they’re outnumbered 1 to 450.

Sometimes, that’s exactly how I feel. I have God on my side, and things only get worse. I’m trusting in God, believing in him with every ounce of me, and my odds of success only go down. What the heck is up with that God? I don’t like your numbers!

We have a podcast listener who has invested everything she has into a building a sweet little business she feels passionate about. Success came knocking quickly and things just fell into place for her. Until they didn’t. Now she’s juggling bills with not enough money to pay them all and having to decide what gets paid this month and what doesn’t. She’s trimming all excess, selling off the very things she worked so hard to buy for her business, and questioning where this will end.

What’s that miracle? Well, keep reading the story and you see that Gideon and his tiny army of only 300 soldiers went up against the 135,000 Minidianites and they won the battle. With God, they did the impossible. And they did it outnumbered 1 to 450.

Why did God allow the odds to stack against them? Why did he keep sending soldiers of their already too small army home? To show that HE ALONE WOULD GIVE THEM THIS VICTORY. To prove WITH GOD NOTHING SHALL BE IMPOSSIBLE.

So, sweet girl trying so hard to build that business as things fall apart, this falling apart may be exactly what you need. Loosen your grip and trust everything God is taking away is for a greater purpose than you can currently understand. Is he going to save it … is he going to radically change it … I don’t know … but I know this … he’s going to use it for good.

Can you settle into that and find peace here? Can you trust as things only seem to get worse and you have less to work with than you did before, God is going to use this for good. He is not setting you up for defeat. His purposes are not to destroy you. His purposes are to give you hope and a future. His purposes are to show you what he can do when all the logic is out the window, your ideas have failed, and the odds are ridiculously stacked against you.

We also have a podcast listener who has tried for years to start her family. All efforts to get pregnant had failed. Their final hope was in-vetro fertilization. They had waited and waited for the perfect time to retrieve her eggs. Then a snowstorm comes. They go anyway and end up with 7 good potential embroys. 5 days later they return to transfer the embroys. By this time, 7 good embroys had dwindeled down to just 1 good embroy, and 1 that was no longer in good status, just okay. They transferred both, knowing this was not the super positive scenario they had been waiting all these years for.

Now, after the continual bad news and odds growing smaller and smaller, she is 22 weeks pregnant with a baby boy and a baby girl!!!!! What they had left is exactly what God would use to do his miraculous works.

May there be no doubt about the source of your victory. May you know EXACTLY where your success comes from. When your battle plan isn’t working, remember it is the Lord who goes before you and fights. You don’t need anything more than that. All this other stuff may just be getting in the way, and maybe that’s why God is letting it all be taken. He wants nothing in his way for this victory. He’s clearing the path. He’s doing the excavation for what will be built here.

Trust him here. Have faith in this process. Your victory has been ordered! Look around, this is all you need!

By Lonnie|July 12th, 2021|Categories: Devotionals, Podcast|Comments Off on 898 Less and Less