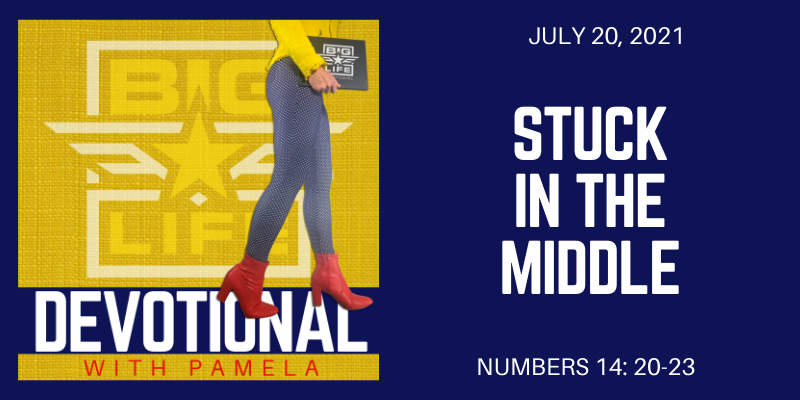 You’re somewhere in the middle of where you were and where you’re going. You’re in between what was and what will be. This space can be filled with dread. It can tiresome and exhausting. It can begin to feel hopeless as you’re not where you want to be yet, but you’ve left behind the comfort of what used to be. These middle grounds are the place where hopes, dreams and goals die. Potential shrivels up and releases its hold as settling in this disappointing space in between becomes your reality.

But my sister, take heart and gather up the pieces of your broken dreams, this is where God is! Here in the middle. He’s here!

The Israelites became real familiar this exhausting, dreadful position in the middle. They left captivity in Egypt and sat out for the 11 day journey to their Promised Land of Canaan. They knew the journey would be hard. They knew the days would be long. They knew the struggle would be real. Immediately on their journey they encountered the impossible. The Egyptian army chasing them, and the Red Sea where they would surely drown before them. But of course we know God showed up in the impossible with a miracle. The sea stood on its ends while they passed through on dry ground, then swallowed up their enemies.

Imagine how they must have felt seeing God working in such powerful ways on their behalf. I bet they did a little celebration dance like “free, free, free at last … we’re gonna dance our way to the Promised Land now! God is surely with us!”

Looking back when you started out, maybe you too saw God working in big ways. Oh yes, remember how clear he made this move for you? Remember how certain you were? Remember how you could see his fingerprints on every detail, giving you confidence in your journey? You dared to believe this was actually going to be an easy transition. Your first steps were so blessed, surely every step after that were going to be equally blessed.

That’s exactly how the Israelites felt. Their celebration dance quickly turned into wandering in the desert. Wandering and wondering. Wondering, God where are you now? Why aren’t you guiding us? We’re out here with nothing. They even began to complain saying they should have stayed as slaves in Egypt, it was better than starving in freedom.

They wandered and wondered, circled and complained, soon the 11 day journey turned to a month. A month turned to a year. A year of getting nowhere. A year of being stuck in the middle, not where they once were, but certainly not where they wanted to be. They became angry and bitter at God and each other. They complained about everything, until God had heard enough.

Numbers 14: 20-23 The Lord said “I have forgiven them … Nevertheless, as surely as I live and as surely as the glory of the Lord fills the whole earth, not one of those who saw my glory and the signs I performed in Egypt and in the wilderness but who disobeyed me and tested me ten times— not one of them will ever see the land I promised. No one who has treated me with contempt will ever see it.”

And so it was for 40 years. 40 years of a generation dying in the desert, never reaching the land that had been promised to them. Never dwelling in the blessings they were destined for. What kept them from it … their complaining in the middle. Their disobedience in the delay. Their contempt in the disappointing reality of things being harder and taking longer than they were prepared for.

So, here you are in the middle. Not where you once were, but not yet where you want to be. This is sacred ground you walk on my sister. How you handle this could determine if you ever get to enjoy all that is meant for you. Your complaining is only creating further delays. Your negative attitude only proves you’re not ready yet. But your faithfulness here with gratitude for daily provision will enable you to pass through this in between and step into your greater destiny. Maybe not today, and maybe not tomorrow, but one day.

What do you have to be grateful for? Maybe things are a real crap fest around you. Maybe it’s all fallen apart and nothing is as you imagined. That’s a fair statement, but wouldn’t it also be fair to say that God has gotten you through? Wouldn’t it be a fair assessment to say there is provision for today? Maybe it’s not what you wanted, maybe it’s not what you imagined, and maybe you don’t even really like it, but isn’t it enough for today? Yes? BE GRATEFUL FOR IT! I mean TRULY grateful.

God provided for the Israelites stuck in the desert every day with manna that fell from Heaven. It was unlike anything they had ever seen before. A sticky dew that when worked with became like a bread. It was called manna because that word literally means ‘what is it?’ Lord, we asked you for food, what is this? My guess is it may have been a little gooey and unfavorable compared to the bread they were used to making back in Egypt. So of course, they complained about it.

They complained until they died.

Oh, don’t let that be you! Don’t sit around complaining about this space in between until your days are over. God is here in this ‘in between’ space, he is making a way for you, he is providing for your daily needs, won’t you stay grateful and hopeful?

In Revelation 22:13 the Lord says “I am the Alpha and the Omega, the First and the Last, the Beginning and the End.”

HE IS HERE. He is here with you. Yes, even when you’re not yet where you’re going, and too far to turn back to where you came from. He’s right here in the middle with you, providing for you. Strengthening you to take the steps of today. Meeting your needs for this day.

Look around and see his provision. Now, don’t complain about it. Complaining keeps you stuck. You’re in the middle, but you don’t have to stay here forever. God is here with you in the middle giving you miraculous provisions for today. How about we don’t have to understand what it is, we just need to be grateful for who provided it.

You know why you can’t go back to the way things used to be? Because you’re not supposed to. You left that place for a reason. It was familiar, but it wasn’t good for you. Stop dreaming of going back to that dysfunctional comfort.

You know why you’re not where you want to be yet? Because there’s still work to be done in the middle. You’re being prepared. You’re being trained. Trained in gratitude by disappointing realities that still hold the provision of God. This middle space in between is not cursed, it is necessary. However, staying here for 40 years is not.

By Lonnie|July 20th, 2021|Categories: Devotionals, Podcast|Comments Off on 904 Stuck In the Middle