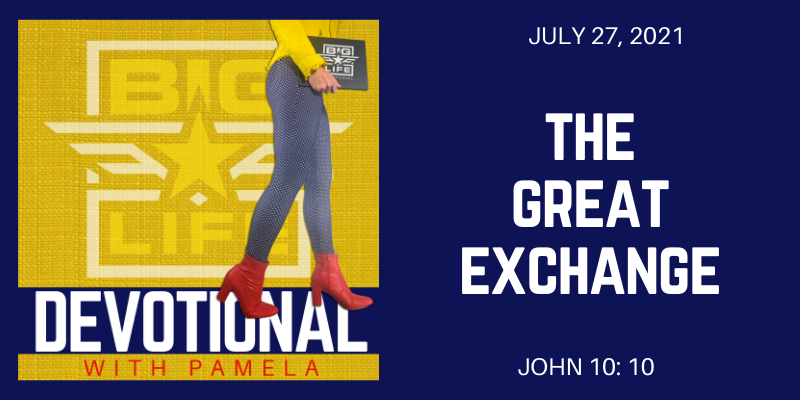 I was fired from a job once. Actually, that’s not true. I’ve been fired twice. Two times I’ve been pushed out of a job and forced to end my secure employment. That makes me sound like a bad person, but neither were a case of fault. I remember both days of my job being taken from me. I was hurt. I was scared. I was sad. I was mad. It wasn’t fair.

BUT, I had no idea how what was taken from me was preparing me for a much greater exchange. In both cases I had been holding on to a job that provided security only because I was fearful of life without a paycheck and insurance. No matter how miserable it became, I was still holding on tight. It had to be taken from me to see it was not best for me. Once it was gone, I was in position for a great exchange. I was finally free to follow my passion. I was available to step fully into my purpose. Having my job taken from me was the blunt push I required to accept the exchange. The exchange that brings me to you today!

You may be in the middle of losing that which you’ve been holding to so tightly. And honestly, there’s nothing more you can do. This isn’t going to be saved. There’s no fixing this. This thing that was once so filled with potential and delight is now being taken. But why? Why is it being taken? Why is a loving and mighty God watching this happen and not stepping in to stop it? Could it be because he has an exchange available for you? An exchange of what is no longer best for you, for something so much greater. An exchange of what you’ve been carrying around out of security, for something you didn’t have the courage to go for on your own.

Jesus was given to us as the great exchange. Our sins, our shortcomings, our failures, in exchange for his righteousness. 2 Corinthians 5:21 “God made him who had no sin to be sin for us, so that in him we might become the righteousness of God.”

That’s freaking fantastic news! Forever and ever you have been covered by what has been done for you. What has been taken from you clears the way for your salvation, and what was given in exchange redeems you fully.

But what about today? Really, what about this day here in your life this side of Heaven? What about the real life events unfolding that steal your peace, spoil your plans, and seemingly ruin your future. Is Jesus just for salvation, or is he for this life you’re living now? Was there an exchange for what is being taken right now?

Jesus tells us in John 10:10 that he came “so that you would have life, and have it more abundantly.” Yes, you will survive this, but more than survive, you will THRIVE in this. You will have life so full that it will overflow out of abundance. That is what Jesus came to give you this side of Heaven. Do you accept it? Great! Now, some things will need to be taken for this exchange.

Do I have any listeners who were once young, unwed mothers? Do you remember how your world came crashing down with this devastating news? The dreams for your future were taken in an instant. All your plans were ruined. You thought your world had come to an end. But now, you can’t imagine your life without the child you never planned for. Your life changed because there was an exchange of what you had planned, for something greater.

Or maybe there was a marriage you fought so hard to save, but he left anyway. Your “forever” was taken and you were left alone. You didn’t know it then, but God had a greater plan for your future than you could have ever imagined. An exchange was made and God ensured it would be ridiculously good for his girl.

The home you built, the home you loved, the home you dreamed of growing old in. Then you had to sell it. You had to let go of all you had worked so hard for and turn over the keys. Let me tell you, God isn’t so big that he doesn’t care about the home you live in. He cares and he moves on your behalf over these details. The home had to be taken from you so you could receive the future exchange. A positioning for something greater. An unfolding of more than you could have dreamed of on your own.

You were about to settle where you were, just calling it comfortable and good enough. But Jesus said, no this isn’t abundance. This isn’t overflowing. This isn’t the fullness of life I came to give her. There’s SO MUCH MORE. So the exchange begins, but it begins by what you have being taken.

If something is being taken, go ahead and loosen your grip and tell God you’re awaiting the exchange. Tell him you’re counting on him to do what only he can do.

Does it mean it’s been easy? No. Does it mean I’ve never questioned? I wish I could say I’ve always had faith, but my faith has wavered. But God never left me once, and he’s always, without fail, made a way for me.

He will do the same for you. He will take you right through the toughest times. He will lead you through the ashes of your burned up dreams and failed attempts. He will parade you right on by all that was taken from you, and allow you to step into the exchange he has made possible for you.

Your sins and transgressions exchanged for the righteousness of Jesus … that’s a GREAT deal for your eternity.

Your current position and comfort exchanged for overflowing abundance … that’s a GREAT deal for your today.

If it has been taken, it is being exchanged. God can be trusted here.

By Lonnie|July 27th, 2021|Categories: Devotionals, Podcast|Comments Off on 909 The Great Exchange