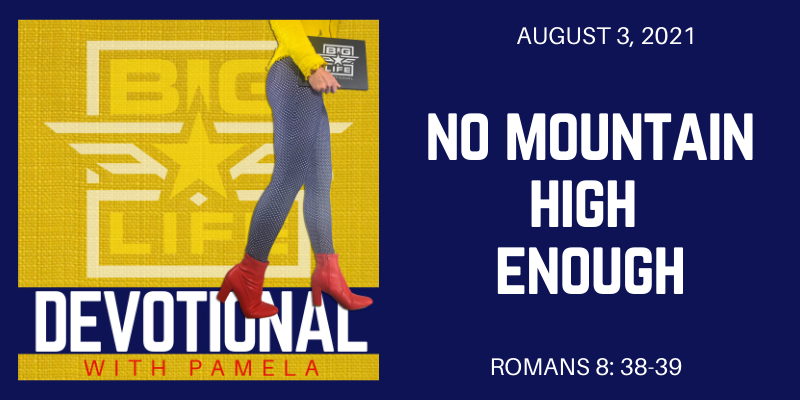 We all know the song “ain’t no mountain high enough, ain’t no valley low, ain’t no river wide enough, to keep me from getting to you baby.” We think of it as a love song, and it is, but did you know it didn’t start as a love song? The song was written in the 1960’s by a young man who had moved to New York to pursue a dream. That dream had fallen short and he found himself homeless. He looked up at the tall buildings in the city, wondering how he was ever going to climb his way to the top and he said to himself “ain’t no mountain high enough.” Yes, Nick Ashford was speaking to himself. He was speaking to the life he wanted and the goal he was pursuing. There ain’t no mountain high enough to keep me from getting to you.

As we know, that song went on to be a wildly successful hit. Nick Ashford and Valerie Simpson met while at church in New York, she was there to worship, he was there to get a free hot meal during his struggles, they fell in love, married, and wrote music together for nearly 40 years. Success was theirs. Songs like “I’m Every Woman (it’s all in me – anything you want done baby, I do it naturally)” and “Solid (solid as a rock).” But before all of that, there was a man who had failed, who was homeless, who was going to church only to get a hot meal, who had to look at the mountains of impossible standing in his way and declare he wasn’t giving up.

Isn’t that a great story? I learned that little fact this morning while listening to an Oprah podcast and I’ve been singing it since. It made me think about all that towers over us today, blocking us from what we really want. All the obstacles. All the hardships. All the setbacks and frustrations, delays and difficulties. Have we bowed down to that which stands in our way?

Psalm 104 is this beautiful poetic writing about the majesty of God and his creation. I love the entire chapter. Here are a few of my favorite parts:

“The Lord wraps himself in light as with a garment;
he stretches out the heavens like a tent
and lays the beams of his upper chambers on their waters.
He makes the clouds his chariot
and rides on the wings of the wind.
He makes winds his messengers,
flames of fire his servants.
He set the earth on its foundations;
it can never be moved
You covered it with the watery depths as with a garment:
the waters stood above the mountains.
Bat at your rebuke the waters fled,
at the sound of your thunder they took to flight:
they flowed over the mountains,
they went down into the valleys,
to the place you assigned for them.
You set a boundary they cannot cross:
never again will they cover the earth.
May the glory of the Lord endure forever;
may the Lord rejoice in his works –
he who looks at the earth, and it trembles,
who touches the mountains, and they smoke.”

God was not limited when he created the Universe. Nor was he limited when he formed your life. There were no limits when he designed your purpose for which you were created. He held all that was possible in his mighty and capable hands, and he whispered dreams and desires within your heart. Then he put you here in this place and time, in the middle of tall mountains and low valleys, and said ‘let’s do this together.’

Together. God wants to pursue your destiny with you. He wants to guide you on this journey and direct you each step. He wants to reveal his majesty to you by strengthening you to do that which you thought you couldn’t do. You see, I believe as much as he wants you to know there’s no mountain high enough to keep you from getting to the life you were created for, there’s also no valley low enough to keep him from getting to you.

You can’t go too low for his reach. When you hit rock bottom, remember he is the rock. This is where you rebuild. On the firm foundations of the Almighty. There’s nothing standing in the way of God’s power on your behalf. There’s no river too wide to keep him from coming to get you.

With God, nothing is impossible. So sister, stare down the mountains in your way, take a good look at the low valleys before you, go ahead and see the swift waters of the river between where you are and where you want to be, and move forward WITH GOD! Without him, this is indeed impossible. And it was designed to be impossible.

God is the one who made mountains. He is the one who decided where they would be. He created the river that keeps you on the bank. He controls its flow. He dug the depth of the valleys and set their boundaries at the foot of the mountains. This hard terrain has the fingerprints of God all over it. And you’re right here in the middle of it because this is where you understand what you’re made of and what you’re made for.

And may you remember, there’s no mountain, no valley and no river that could keep God from getting to you. Nothing will separate you from the love of God. I leave you with this scripture today Romans 8: 38-39 “I am convinced that nothing can ever separate us from God’s love. Neither death nor life, neither angels nor demons, neither our fears for today nor our worries about tomorrow—not even the powers of hell can separate us from God’s love. No power in the sky above or in the earth below—indeed, nothing in all creation will ever be able to separate us from the love of God that is revealed in Christ Jesus our Lord.”

By Lonnie|August 3rd, 2021|Categories: Devotionals, Podcast|Comments Off on 914 No Mountain High Enough