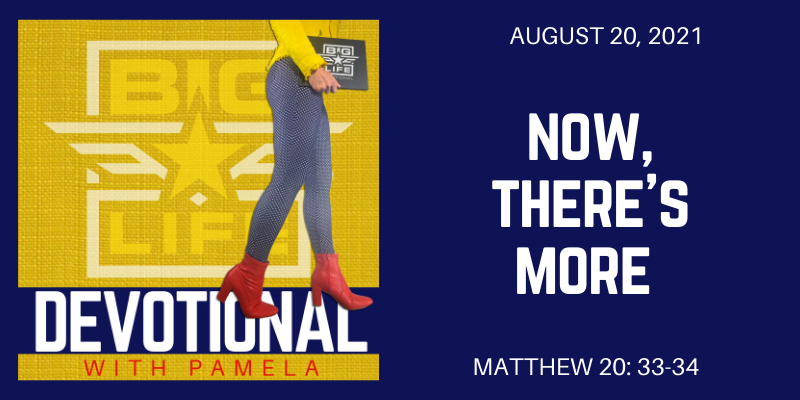 Something bizarre has been happening lately, and I want to tell you about it. I can’t properly put words to it, but I have felt different. Lately, I’ve felt more guided, more grounded, more at peace and balanced. The very things I’ve wanted for the past 20 years are unfolding within me and around me. So, I’m left to wonder what caused this shift? What has changed in my life that has made the difference?

Answer. I have someone praying for me. Not just mentioning my name to the Almighty, but praying specific prayers over me. And that’s exactly what today’s devotional is about … the power of praying SPECIFIC PRAYERS instead of blanket prayers.

I’m a blanket pray-er. I figure God knows what he’s doing and he doesn’t need this little gal here telling him how to do his job. So, out of respect, I just lift up a name or a situation and ask for his help or blessings or provision. There’s nothing wrong with that, but what if there’s MORE than that?

Many years ago I heard prayer described as the allocation of God’s power. You see, it’s God’s power, not our own, that makes things happen, but we are holding that power and get to direct it. If we don’t direct it, that power may be laying on the ground going unused. If you’re wandering around in the dark and I’m the one with the flashlight, what good would it do for me to say, “well, I hope you find light for your next step so you don’t stumble and fall.” I’m holding the power to help you not stumble, but I have to use it by turning on the flashlight in my hand.

As daughters of the King, we hold power. It’s up to us to direct that power in specific directions, instead of just hoping God does something.

I recently found out my husband has been praying specific prayers over me and they are the very things that have been happening in me and around me. Yes, a son of the King has been directing God’s power specifically towards me. That’s what has made the difference. Every morning while I work on the devotional, he takes our dog for a long walk along the coast. As he walks, he prays. But, it’s no longer a blanket prayer, it’s deep and intentional and specific. As a result, God’s power has been allocated in my direction and I see and feel the difference. The cracks where the enemy had been slipping in and poking at me are now sealed up, protected and filled because someone started asking God to do it for me.

Blanket prayers weren’t doing it. Specific prayers have made the difference. Power has been allocated in a targeted direction and the impact has been made.

Now it’s our turn. If you’re praying general, broad prayers, know there’s nothing wrong with that, but there’s more than that. Sometimes a sharp shooter approach is more powerful than a machine gun approach. It’s time for sharp shooter prayers to penetrate specific areas!

My kids have been prayed over nearly every day of their lives. They’ve still wandered off, made their world class stupid decisions, created messes we still don’t even know about, and hidden in their dark little corners of guilt and shame. But recently my husband and I traded the machine gun approach to prayer over our kids and started zeroing in on targets with God’s power. In a matter of a few months, we have seen some radical differences. Literal conversations of “mom, I don’t know, something just changed and I no longer wanted to do that.”

Yes, something changed! What changed was blanket prayers traded for specific prayers. A direct hit of God’s power allocated through our requests.

Girls, WE HAVE THAT POWER!

A friend of mine messaged me this week with her concern over the heartbreaking and desperate situation in Afghanistan. She was asking me to help her in praying over this, but she ended up helping me. She shared with me how she’s asking God to let them find hiding spaces and forgotten weapons that can help in the right place at the right time. She’s praying the fearful would have the faith of David to do courageous things. That rescue missions are successful with precision in all the details.

Yes girls, this is what we do! We use the power of the Almighty given to us, and we allocate it specifically. God has invited us into the inner circle of life altering power … let’s start using it!

Last night as I laid down to sleep, I knew my daughter was half way around the world, strapping on 80 pounds of gear, heading out for a 13 mile ruck march. Instead of my general blanketed prayers of “Lord, please bless my girl”, I prayed for a cool breeze on her face. I prayed for strong shoulders to carry the load. I prayed for her feet to be dry in her boots. I allocated the power of God directly to the thoughts in her head and the songs she would sing to herself as the miles grew long.

These kind of prayers not only provide God’s power to the recipient, but a connection to the one doing the praying. God wants this connection with you. Yes, he knows all the details. Yes, he has the power to do all things with or without you. Yes, he’s everywhere all the time. Yes, his ways are better and higher than yours. Yet still, he has invited you to be connected with him and be part of the allocation of his power! How absolutely amazing.

Imagine one day meting a stranger in heaven and they tell you their life was impacted because of your specific prayer over a situation happening half way around the world. Imagine someone telling you they came to knew the love of Jesus because of your prayer. Imagine my friend who is praying for hiding places and acts of courage for the Afghan people, one day being told how they were the recipient of that power and it made a difference. Don’t you want to be part of that?

When my husband was a young teenager, his step mother began praying specific prayers over him for a good friend that would help him get on the right path in life. Shortly after she began praying, his family packed up and moved from Dallas TX, to a itty bitty farm town in Missouri for absolutely no good reason. I mean other than God had heard those specific prayers and had the perfect friend to help this young man get on the right path, and that friend was in Ava, MO. It was me … 15 year old me was the friend and he and I started going to Church together for no other reason than to get to spend Sunday mornings with each other. With every ounce of me I believe his step-mothers specific and targeted prayers are responsible for us meeting.

Matthew 20: 30-34 tells a story of specific prayers: “Two blind men were sitting by the roadside, and when they heard that Jesus was going by, they shouted, “Lord, Son of David, have mercy on us!”
The crowd rebuked them and told them to be quiet, but they shouted all the louder, “Lord, Son of David, have mercy on us!”
Jesus stopped and called them. “What do you want me to do for you?” he asked.
“Lord,” they answered, “we want our sight.”
Jesus had compassion on them and touched their eyes. Immediately they received their sight and followed him.

Their general prayers of “Lord, have mercy on us” did not bring their healing. They made Jesus stop, but then Jesus asked “what do you want me to do for you?” This is the invitation for a specific prayer. When they were specific asking for their sight, Jesus healed them.

You’ve been asking for help. You’ve been saying “Lord, please be with these people. Protect. Provide. Bless.” There’s nothing wrong with that, but there’s more than that! Now this is your opportunity to allocate God’s power in a specific and targeted direction. Jesus says “What do you want me to do?”

What a beautiful invitation for you to talk to Jesus about the details. Allocate his power specifically, and grow in your connection with the power source!