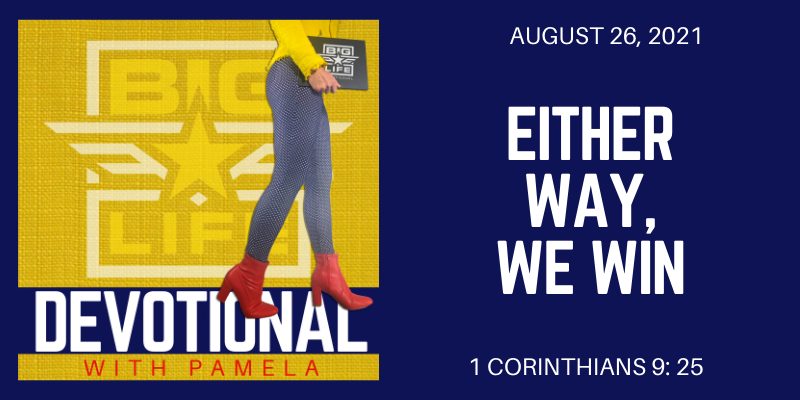 We’re all in a battle. A battle to move forward. A battle to get better. A battle to overcome our own bad habits. A battle to find our way. But, there are even greater battles happening here. Battles for life. Yes, practically every family is currently touched by a battle to survive. A life hangs in the balance, and we feel so out of control to swing that life towards surviving. We pray, and people are still dying.

But my sister, this is nothing new. People die. Since the beginning of time, lifetime’s expire. It is a lifeTIME because life has a time to begin and a time to end. There is a timeline to life, it is not infinite. Ecclesiastes 3: 1-2 “There is a time for everything, and a season for every activity under the heaves: a time to be born and a time to die.” Nope, you don’t escape that.

We’re all here experiencing a living death. While we’re alive, we’re in the process of expiring. Let us keep life in proper perspective so we can live it with proper priority.

Yesterday I watched a mother tell the story of her son at his funeral. Carson was a vibrant and courageous young man who battled cancer and died earlier this month. The stories his mother told were fantastic. Stories of his winning spirit, competitive nature, and adventure filled life. But the best story of Carson is the one I want to share with you today.

As Carson battled, enduring over a year of every kind of treatment available, he came to terms with the reality that he may not survive. One day he asked his mom if she would still believe in God if he didn’t make it. Without hesitation she told him, “no matter what, I will still believe. I will believe because I know heaven is real.”

The mother had a vision a few years prior to Carson ever becoming sick. God came and whispered to her and said, “come with me, I want to show you something.” Before her she saw yellow golden skies and a feeling of total and complete joy like nothing she had ever experienced before. She knew she was getting a glimpse of heaven, and it was real.

Now with her son’s life hanging in the balance, she knew if the battle was lost, heaven is without a doubt real because she had already seen it.

In Carson’s final days of life, he woke up and excitedly shared these 4 words: EITHER WAY, I WIN!

What had he seen? What had he just experienced? Perhaps he too had seen those golden yellow skies and the immense feeling of joy. He too had gotten a glimpse of the paradise awaiting him, and he knew living would be awesome, but dying wouldn’t be bad. Either way, he wins.

There is so much more to life than what we have here and now. This is all temporary my friends, but eternity awaits! And because of Jesus, WE WIN! The ultimate battle has already been fought and Jesus declared we’re on the winning team with him. On the other side of this, YOU WIN! Remember that. Life here was never meant to last forever. That’s not the purpose of your lifetime.

1 Corinthians 9:25 “All athletes are disciplined in their training. They do it to win a prize that will fade away, but we do it for an eternal prize.”

Paul wrote this letter to the Corinthians. They understood competition and prizes. Near their city of Corinth, one of the most famous Greek athletic festivals was held. It was the Greek Olympics where the best of the best competed. The prize for victory earned by all their hard work in training and discipline, was a pine wreath placed on their head. Within a week, the wreath would wither and all the work training for the next year’s competition would begin again.

But there is a wreath of thorns that has been worn for us. The brow of Jesus bore the crown on the cross where victory was declared. And that victory was for you and I!

It’s like a relay race. Everyone has their race to run as part of the team. We still show up. We still run. We still live. We still work. But when Jesus gets that baton in his hand, he makes up for anything we lack. He covers the distance where we fell short. He wins this thing for us and we are crowned as the winners with him!

I’ve shared before about the strangest blessing my Daddy gave me on his death bed. One by one, I watched him bless the members of our family with the sweetest words. He affirmed their place in the world and charged them to move forward. Then, it was finally my turn. My turn to hear the words Daddy would have for me. My turn to receive his blessing. In a moment where we were all alone, he said one thing to me: “You’re not the winner.”

Yo, what? Back that up … that’s all you’ve got for me? I’m not the winner? But, that was it. Those were his words for his one and only daughter. The next day after he had taken his final breath on earth and his first in heaven with Jesus, opening his eyes to those golden yellow skies, I understood. HE WON, NOT ME! There was no reason for me to be sad for him, he won. He had completed his race and received his victory.

But, I’m not left here as the loser either. I now get to live every day of my life knowing without a doubt heaven is real, and it is waiting. Everyday of this life, we get to win with Jesus. We get to win knowing what Jesus said in John 16:33 is true “In this world you will have trouble. But take heart! I have overcome the world.”

There will be days that suck. There will be battles that are freaking hard. There will be hardships and struggles and more trouble than we feel like we can bear at times. But Jesus has already overcome every bit of it. So we win. We win here in this life, and no doubt when our lifetime is over, we win too!

My sister, either way, with Jesus you win!

This life was never meant to last forever. This is a temporary assignment and when the assignment is complete, your address will change.

We’re all just here, running this race with Jesus. Doing our thing, putting in our time, carrying the baton as far as we can before we pass it on to the next teammate. Some miles we succeed and some miles we struggle, but no matter what, we win! We win because Jesus has already been crowned victorious and he’s bringing us along with him!

Do not live in fear. Do not be consumed by these troubles. Jesus has already overcome them all. Either way, we win!

By Lonnie|August 26th, 2021|Categories: Devotionals, Podcast|Comments Off on 931 Either Way, We Win