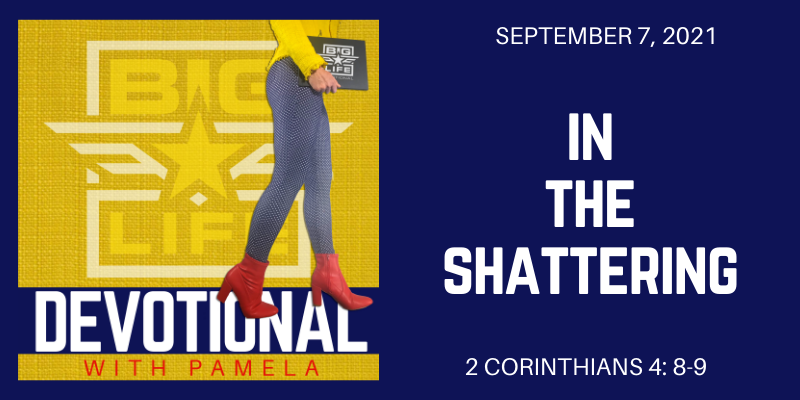 No one wants to have things broken in their lives. No one wants to watch their dreams be shattered. But it happens. What we thought we were working for goes up in smoke and we’re left with charred remains of what was. But we know God works in mysterious ways. We know he takes that which is broken and makes it whole again. We know he trades beauty for ashes. We know he exchanges good broken plans for better plans that we couldn’t have imagined on our own.

But, it still sucks when you’re going through it! Brokenness still hurts. But hey my broken sister, know this … Psalm 34: 18 ““The Lord is near to the brokenhearted and saves the crushed in spirit.”

You will not go through this alone. God is drawing in close to you and saving you from this crushing.

2 Corinthians 4: 8-9 “We are hard pressed on every side, but not crushed; perplexed, but not in despair; persecuted, but not abandoned; struck down, but not destroyed.”

Are you hard pressed on every side? I mean is it all closing in on you? Every where you turn there is a road block. Everything you have tried doesn’t work. You feel pressured by the passing time and the lack of progress. Stuck. Stuck in this place of uncertainty and you can’t see what God is doing here.

What God is doing here is saving you from being crushed. You want to run on ahead and jump over some crap, skip some of this, and fast forward to easier times. But God knows if you do that, you will be crushed. You won’t be ready for what’s ahead, so he holds you here in the pressing. He forces you to “lie down in those green pastures” because the Shepherd knows as much as you want to run over there into your freedom, there’s danger as the enemy hides and plans his attack.

You think you’re being held back, but you’re actually being protected. You don’t see all God sees. You don’t know all he knows. This is FOR you, not against you.

Perplexing isn’t it? It doesn’t make sense why your good plans fell apart. It seems cruel to endure this hardship. And hey, it’s okay to be confused by this. It’s okay to admit you don’t understand why the heck this is happening. Be perplexed, but do not despair. Despair is a complete loss of hope. It’s the waving of the white flag that says ‘there’s no possible way I will win, so I give up.’

God is fighting for me. My battle has been taken over by the Lord, so victory is guaranteed. I will never despair. My hope will never be surrendered. With God ALL THINGS ARE POSSIBLE, so I will boldly stare down the impossible and know God is for me, not against me, and this battle will be won.

Yes, some things are about to get broken up in here! Break the chains. Break the facade. Break the generational curse. Break the habit. Break the walls. Break the ceiling. We’re not afraid of the breaking God. We’re ready for you to shatter this so we can step fully into the life you planned for us.

I am not crushed. I will not despair. I am not alone. And I will not be destroyed!

I trust if God allowed it to be broken, he has a plan for the restoration. I trust if God shattered it himself, it was for a greater purpose than I can imagine.

By Lonnie|September 7th, 2021|Categories: Devotionals, Podcast|Comments Off on 939 In the Shattering