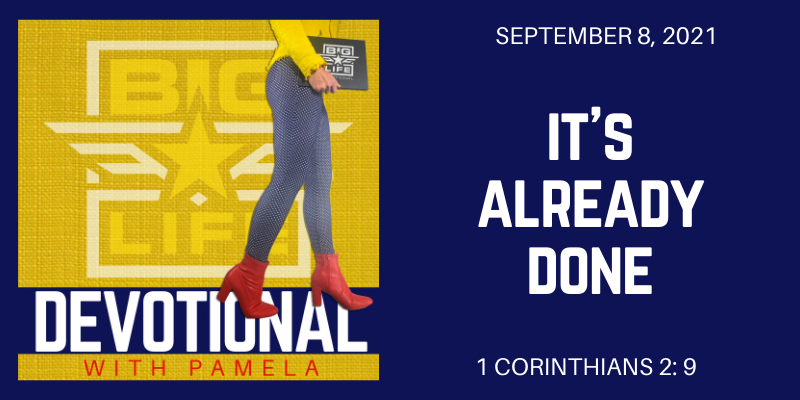 You can’t see where your current circumstances are leading you. You can’t understand why things are happening the way they are happening. Girl, you can’t hear the angels singing over you as you take the next step toward your destiny. But, it’s all unfolding. There’s a purpose here. There’s something so much greater behind all of this and it’s leading you to things you haven’t even imagined yet.

Maybe God hasn’t revealed his good plans to you yet because you wouldn’t believe it if he did. You would dismiss yourself so fast from the possibilities he has declared over you. You would shrink back and affirm you’re not good enough because you do not yet know what’s inside of you. You have yet to see what God has been guiding you to because if you did, you wouldn’t believe it.

Sister, you think you have dreams for your future … they pale in comparison to the dreams God has for you! There are things awaiting you that will blow your mind!

In 1 Corinthians 2:9, Paul wrote “However, as it is written: ‘What no eye has seen, what no ear has heard, and what no human mind has conceived’ — the things God has prepared for those who love him.”

He is referencing words inspired by the holy spirit over 8 centuries before his time. 800 years before Paul was Isaiah. Isaiah was a prophet. Moved by the Spirit, he foretold events he could not have known about. He told about a God who would do unspeakable things for his children who loved him. A God who was planning all along to send his one and only Son, so that whoever believed in him would not perish, but have eternal life. In Isaiah 64:4 was the foretold prophesy of a God who was going to do things no eye had seen, no ear had heard, and no human mind had ever imagined.

This is what God was preparing, and his Spirit told Isaiah about it 800 years before it happened. Now, here’s Paul in the wake of Jesus’ life, death and resurrection saying “IT’S TRUE!” Our human minds could never comprehend what God has done for us, and now we will never be able to imagine what he has prepared for us next.

Do you know? Do you know how this is all going to work out? Do you know where you will be in 5, 10, 20 years? Do you know how the details of today will set you on a trajectory for a tomorrow you can’t even imagine yet? NO, YOU HAVE NO CLUE. Oh, you make your plans. You do the numbers. You assume it’s this many years until you’re married, until you have kids, until the kids are grown, until you retire, or whatever milestone you’re working towards, but you have no idea what the future really holds.

God holds you future. He holds every detail of your life in the palm of his hands. Nothing touches you that doesn’t first pass through his hands. And nothing passes that hasn’t already been put into alignment with his good plans for you. Does it mean everything that comes into your life will be good now? No. But it does mean everything has been predetermined to be used for good and bring you to the good purpose for which you were created.

While listening to an Elevation Church podcast this morning, I heard the story of Steve Jobs when nearing his own death, walking a man through all the closed doors of security into a secret room. In this secret room were creations the world had not yet seen or even imagined yet. Prototypes of devices and technology Steve Jobs had already created, yet hadn’t revealed. The world wouldn’t see these creations for 3 more years, but they were there. Already developed. Just waiting.

You think Steve Job’s creations were good … check out God’s creation! Check out his works! Wait until you see the things he has already formed that you have no idea about!

Oh sister, if you could only walk through the closed doors of security to get into the secret chambers of God’s creation for you. If you could only see what he has already made, already aligned, and already purposed for YOU. You just don’t know all he has already done, and you’re not supposed to know yet. He has plans for the reveal, and it will happen exactly when it’s supposed to happen.

Your role here is to remain faithful on the journey to discovering what has already been designed for you. Just be faithful here sis. Don’t lose hope. Don’t give up. Don’t self-sabotage because today doesn’t look the way you wanted it to look. Today is a required step on the journey to fully stepping into what your eyes have not seen, what your ears have not heard, and what your mind cannot conceive. God has prepared things for you in his secret chambers. It’s already done. And when the time is right, you will see what you can’t currently even imagine. It will be your reality. It’s already done.

Today, we dream and imagine what those things could be. We partner with God in agreeing it will be ridiculously good and the timing will be just right. And then we remember whatever we could possibly dream up, God’s creation will be light years ahead of our dreams, and it’s already waiting for us! So today we trust the unfolding process to get us to what God has already done for us.