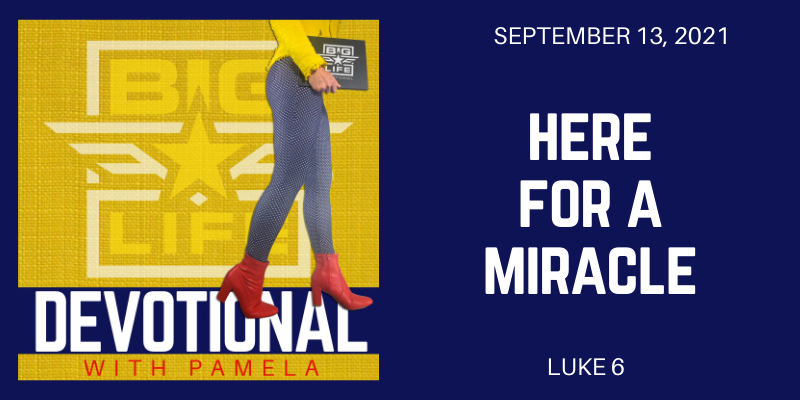 And unfortunately, experiencing and feeling these things for yourself isn’t the sweet blessed moments you imagined. It’s the hardest times of your life. It’s the space between a rock and a hard place, and you’re being smashed. It’s the week beyond the stretch of your last paycheck. It’s the dark times where you don’t see how it’s ever going to be okay again. It’s the storm, it’s the battle, it’s the odds stacked against you, it’s the outnumbered, outmatched, unprepared and unable moments. This is where you see, feel, and experience God.

And maybe that’s exactly where you are today. You’re staring down the impossible and wondering how in the world you’re ever going to get through this. Well, this is where you get a front row seat to the movement of God! This is where you see things that change you forever. This is where you walk away never being the same again.

The disciples of Jesus had a moment like this. A moment where they felt the pressure. They faced the impossible, and they were called upon to act in faith. The moment comes when they had a crowd of hungry people all around them, and nothing of significance to offer. But Jesus has the ability to take what is not enough and make it more than enough. He has the ability to use anything offered in availability to him, and work his divine multiplication to create an abundance.

Most of us are familiar with the story of the “Feeding of the Multitude.” We fast forward to the miracle so fast in this story, but let’s sit for a bit in the disciples reality before the unfolding of the miracle. The reality was they were pressured to do something they could never do. A crowd of 5,000 men, plus women and children, had gathered to hear Jesus. They had been there all day and now they were getting hungry. Knowing they could never feed them, the disciples remind Jesus of the time and tell him to wrap this shindig up and send them away to get food for themselves. But Jesus wasn’t done here.

Sometimes we’re asking God to wrap things up in our own lives. Lord, let this be over. Let this be the end of this struggle. Fix this, and fix it right now please. I’m over it, I’m ready to move on already, but God won’t seem to allow me step out of this. Why is that? Could it be because he has more work planned here? Could it be because he’s been intentionally setting the stage for something bigger than you have planned and moving on now would cause you to miss this miracle?

But it doesn’t look perfect. It sure doesn’t feel perfect. The disciples know this is a mess, but they had no idea the message this mess was about to become. A message we would still read today, thousands of years later. A message you, the precious and prized daughter of the King, would need to hear just for today.

Luke 6, starting in verse 31: “Then, because so many people were coming and going that they did not even have a chance to eat, Jesus said to the disciples, “Come with me by yourselves to a quiet place and get some rest.”

So they went away by themselves in a boat to a solitary place. But many who saw them leaving recognized them and ran on foot from all the towns and got there ahead of them. When Jesus landed and saw a large crowd, he had compassion on them, because they were like sheep without a shepherd. So he began teaching them many things.

By this time it was late in the day, so his disciples came to him. “This is a remote place,” they said, “and it’s already very late. Send the people away so that they can go to the surrounding countryside and villages and buy themselves something to eat.”

But he answered, “You give them something to eat.”

Okay, for real, the disciples are making sense here. It makes sense to acknowledge the time and the facts and shut this down. But Jesus is being ridiculous. How ridiculous for him to say, “no, you feed them.”

Maybe Jesus is being a little ridiculous in your life right now. He’s telling you to do something that makes absolutely no sense. You feel like failure is inevitable. You feel what you haven’t isn’t nearly enough and you can’t do what needs to be done. Ahhhh girl, you have no idea what Jesus is getting ready to show you next!

The disciples had no idea either. That’s why they had their moment of trying to bring reasoning to the ridiculous request.

They said to Jesus, “That would take more than half a year’s wages! Are we to go and spend that much on bread and give it to them to eat?”

But then Jesus says the one thing that changes everything. One thing that he’s still saying today, and he’s saying it to you … What DO you have? You’ve been telling me all you don’t have. I just want to know what you DO have. I can work with what you do have.

When they found out, they said, “Five—and two fish.”

So basically the disciples are saying, what we do have is so ridiculously little it doesn’t even matter. They’re facing a crowd of 5,000 men PLUS women and children. Why even take inventory of what they know isn’t enough?

Is that where you are? No longer even taking inventory of what you do have because you know it’s not enough. You can’t possibly do what needs to be done because you could never be enough. You could never overcome this obstacle because you don’t have what it takes. But isn’t Jesus trying to show us, it’s not the quantity of what you have that matters, it’s your willingness to let God work in the insufficiency and trust he will indeed make it more than enough. YES, that’s exactly what he’s telling us today.

What you have and what you can do is ridiculously insignificant, and this is all God requires to do more than you could ever imagine. Turn it over and watch him work!

Picking up in verse 39 now “Then Jesus directed them to have all the people sit down in groups on the green grass. So they sat down in groups of hundreds and fifties. Taking the five loaves and the two fish and looking up to heaven, he gave thanks and broke the loaves. Then he gave them to his disciples to distribute to the people. He also divided the two fish among them all. They all ate and were satisfied, and the disciples picked up twelve basketfuls of broken pieces of bread and fish. The number of the men who had eaten was five thousand, plus women and children.”

The people eating this meal just knew they were being fed. But the disciples, having felt the stress of how little there really was KNEW the miraculous work of Jesus here. When you sit in the stress of the insufficiency, you then get to see the miraculous sufficiency of God’s provision. Without the hardship, without the struggle, without first the stress and uncertainty, you miss the miracle. You just get a meal and you walk away with a full belly. But the disciples received so much more. They received a full spirit having been in the middle of the stress.

The only thing required of you here is to recognize what you do have and allow God to work with it. What will he do with it … ahhhhh girl, I don’t know, but I bet it’s going to be more than you ever imagined.

By Lonnie|September 13th, 2021|Categories: Devotionals, Podcast|Comments Off on 943 Here For a Miracle