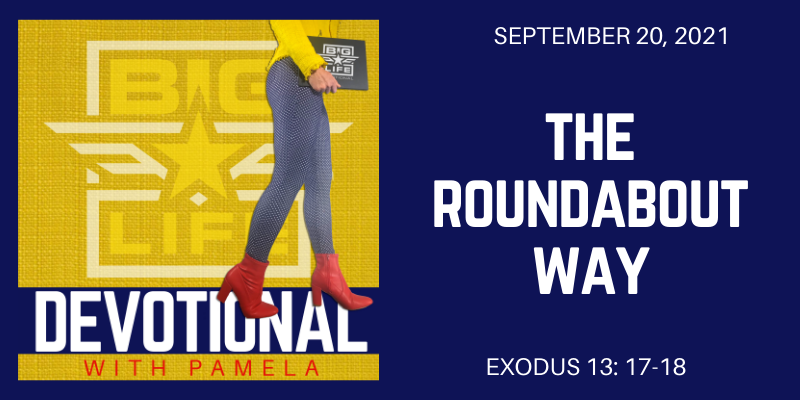 Do you ever feel like God is taking you the long way around? Like he is leading you down the longest possible path to get you where you’re going? You look around and see others getting where you want to be faster, but no matter what you do, nothing seems to speed the slow pace of the never ending long journey you’re on.

You would love a short cut right about now, wouldn’t you? A fast pass … oh how about that one?!!!! Something, anything to shorten the distance between where you are right now and where you’re trying to go. You just want to get there already and the shortest possible route there would be your choice.

But, what if there’s a purpose behind the long way? What if this is taking longer because it’s supposed to take longer? What if there was indeed a fast pass and a short cut available, but God led you around it because he knows what you do not know?

If you knew this is for your good, you wouldn’t complain as much, right? You wouldn’t put on your miserable pants and angry eyebrows so darn quickly every morning if you knew there was a really good reason for this long way around, right?

Right! Well God made it so clear to me this morning THERE IS A REASON FOR THIS, so the complaining has GOT TO STOP! The chosen misery is absolutely ridiculous. Straighten yourself up girl. You don’t see what God sees. You don’t know what God knows. But you must trust if God has taken you this way, it’s not just some random hardship because he was feeling difficult.

Why do we assume sometimes God is just being difficult? He’s not! He’s being divine! He’s being omnipresent and omnipotent. He’s seeing things you cannot see and directing power you know nothing about.

This long way that just seems ridiculously difficult could be to protect you.

I’ve studied and taught the story of the Israelites hundreds of times, but today, something about their journey really stood out to me. Somewhere between their flee from captivity in Egypt and their miracle at the Red Sea was a turn in their story I’ve overlooked.

Exodus 13: 17-18 “God did not lead them along the main road that runs through Philistine territory, even though that was the shortest route to the Promised Land. God said, “If the people are faced with a battle, they might change their minds and return to Egypt.” So God led them in a roundabout way through the wilderness toward the Red Sea.”

There was a shorter route, but God did not lead them on the shorter route. Now, it’s not like God explained this to them. They just knew God was guiding them, and he seemed to be guiding them on the hardest, longest possible way to their Promised Land. They didn’t know God was protecting them from a battle that would cause them to give up before they ever got to their miracle. They just knew they were going the long way through the wilderness that would be a whole lot harder than the other way available.

Maybe that’s the route you’re on right now. It’s the roundabout way. This isn’t going as fast as you wanted it to. It’s not taking you straight where you want to go. You look around and see there are clearly others who have it easier than you, making it faster than you, but for some unknown reason you are destined to this harder route. WHY?

Well sis, you have no idea what God may be protecting you from!

What if God is protecting you from something on the shorter, easier route that would completely derail you from your journey? Isn’t God sovereign? Isn’t he all-knowing? Isn’t he all-powerful? THEN GIRL TRUST HIM!

The shortest fastest route isn’t always the best. God knew if he allowed the Israelites to go the shortest, fastest route it would take them to a battle, and that battle would cause them to turn around and settle for what they had just walked out of. And guess what, God knows we would do the same. He knows we would settle for what he just rescued us from if we encountered the battles on the shorter route. So, he protects us and sends us on that darn roundabout way that doesn’t make any sense at all.

Honey, it doesn’t make sense because you didn’t see the battle on the path you would have chosen. You didn’t know the traps the enemy had set for you. You didn’t know the ruts you would get stuck in. But God knew, and he saved you from them by making you take the long way around. Sure it will take you longer, but you will get there!

When will we figure out God is in no rush? He holds all eternity in his hands and he has no need to rush through a single season of your life. If the long way is the best way, then he will allot time for it. You can cool your jets, hold your horses, put your pants back on, and calm the heck down sis. God has you on the roundabout way because the shortcut was something shy of his best for you. How about we stop being spoiled brats pitching fits for our way and trust that maybe God knows what he is doing here.

I would have chosen the shortest route to get to what God has promised me, but so would the Israelites. They would have chosen the shortest route. They weren’t looking for the longest, hardest route to get to their Promised Land. They weren’t looking for the scenic route to take photos in fields of sunflowers. They were running for their lives from a power tripping Pharaoh. But God knew what they didn’t know, and he led them through the wilderness to get to their miracle at the Red Sea.

God is leading you to your miracle too, and he may be taking you on the roundabout way there. Don’t get discouraged in this. In fact, in faith, thank him for whatever he protected you from. Thank him for always going before you and guiding you in the way that is best for you, even when you don’t understand the way.

Sis, he just doesn’t want you to give up and miss the miracle he has for you. Keep moving forward with him as he guides you. If it takes longer than you hoped, then just know it was all for a purpose and God is holding time for you.

By Lonnie|September 20th, 2021|Categories: Devotionals, Podcast|Comments Off on 948 The Roundabout Way