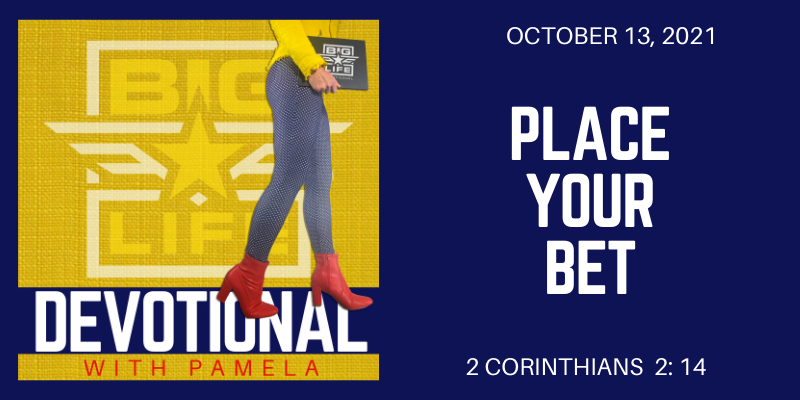 There are just some people you know are going to succeed. People you can trust to show up, do it, and do it right, without fail. People who can have all the odds stacked against them, and somehow come out of it ahead. These are the people you would bet on.

Now the question is, would you bet on you? Would you believe in your own odds of success? Could you count on yourself to show up, do it, and do it right? Would you face the impossible and know somehow, someway, it’s going to be possible.

Scripture tells the life story of David. We first hear of David when he was just a young shepherd boy, delivering lunch to his older brothers when he shows up on the scene of a fight. There a giant named Goliath had been taunting his people. Goliath was looking for a fight, but no one was willing to stand up to him. But David knew it was possible to win this fight. He knew using exactly what he had, he could overcome this giant. So with a slingshot and 5 stones, little David slays the giant and gave his people freedom again.

After that battle, you would surely bet on David. Before that day, no one would have chosen him. David won that day, not because of his stature. He was likely the least of the men there that day. Not because of what he had. He had no gear, no weapons, no elite training. David won because of his confidence. He was confident in his ability to do what needed to be done. He was confident that God had led him to it, so somehow God was going to guide him through it. With God as his guide, he knew victory would be his. Over and over again, he would win because of who was guiding him.

Who is guiding you, my sister? Isn’t the same God who guided David now guiding you? Isn’t he able to equip you the same way he equipped David? Isn’t he here telling you what you have is exactly what he is going to use?

I can tell you with complete confidence, if you are allowing God to guide you, I would bet on you. If you are seeking his will, remaining open to his way, and willing to simply show up and do what needs to be done, being faithful with exactly what God has given you, I WOULD BET ON YOU!

It’s time for you to bet on you. Not because of your perfect winning record … my guess is you’re showing up today with a few past losses. Not because of what you have … honey, that could all be gone in an instant, then what? You can bet on you because of who guides you. If God is guiding you, you’re guaranteed to win.

God doesn’t dabble around in losing battles. He doesn’t sign up for defeat and walk away disappointed. GOD ALWAYS WINS. He takes the most unlikely person, with the most ridiculous odds, and he says ‘yes, this is how I will bring victory.’

2 Corinthians 2:14 (The Passion Translation): “God always makes his grace visible[ in Christ, who includes us as partners of his endless triumph.[Through our yielded lives he spreads[the fragrance of the knowledge of God everywhere we go.”

Yes, we are partners in endless triumph. We are on the winning team, and if you are trusting God to guide you, YOU WILL WIN! Now, you may not win how you thought you would win. You may not win the very first time. But sister, you will win because of who you follow. Victory will be yours because of the one who guides you.

Just as David spread the smell of God’s power to enable his follower to win, we too spread the same fragrance every time we follow his lead. Every time we show up where we are, with what we have, and say ‘God, use me’, we spread the knowledge of God. We lead others to discover his saving power through our yielded lives.

You have yielded your life, right? You have decided his way over your way, right? You have laid those goals of yours before the Almighty and surrendered them to his bigger plan, right? You have overcome your excuses to see he has given you everything you need to show up for this battle, right?

God wants to use your fully yielded life as an example of his power, just as he did with David. He wants to give you a ridiculous story of impossible odds and ultimate victory. He has asked you to be a partner with him in his endless triumph. Girl, SAY YES.

I know who guides me. I know who I put my trust in. I know his ways are greater than my ways, and I desire them over my own. I know I may fail, but he will never fail. I know I have partnered with the guaranteed endless triumph, so I’m not backing down here. I’m not playing little. I’m not assuming defeat when things get tough. I’m not playing out possible scenarios of loss when I know God is for me, not against me, and God doesn’t lose!

I can bet on me today because God guides me. I have complete confidence in God, therefore I can have confidence in myself because I am being guided by him. I’m a partner with him in endless triumph.

If God is guiding you and you are following him, then I’m 100% believing in your ultimate victory here. YOU CAN’T LOSE WHEN GOD IS YOUR GUIDE. The victory has already been declared in this battle. You may have a losing round. You may face defeat along the way. But this isn’t over sister, and God is still guiding you on.

If David was guided to victory over his giant using only a slingshot and 5 stones, then can’t God guide you to victory using exactly what you have? Can’t you defeat your giant? Can’t you overcome? YES YOU CAN. As long as you are following God’s guidance, you’re being led to ultimate victory.

And I would bet on that!

By Lonnie|October 13th, 2021|Categories: Devotionals, Podcast|Comments Off on 965 Place Your Bet