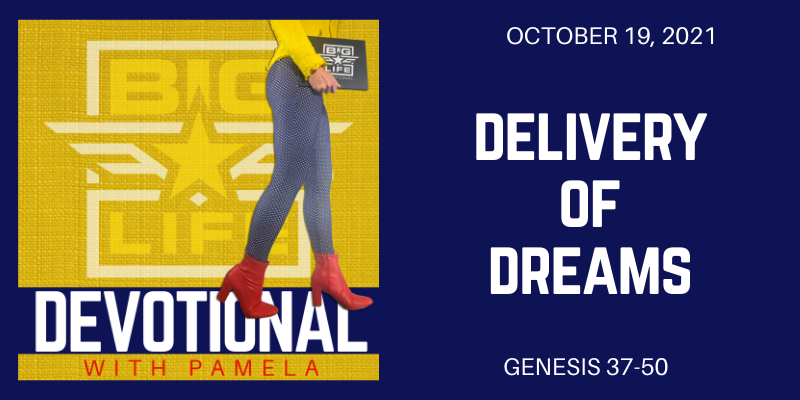 Does your life feel like it’s on hold? Like there’s this big plan for your future, but it’s all been delayed? Why is God stalling? Why would he make you wait here when he holds the power to move you forward immediately?

Leaning to trust the flow of God’s plan is the journey we’re all on. My journey may look different than yours, however there’s a flow for both of us. Often times that flow seems to take a detour and life goes sideways when all we wanted was to move forward faster.

Joseph was a young man destined for great things. At 17 years old, he began having prophetic dreams. Dreams that told him of his future and how God would use him. But the space between receiving these dreams from God and stepping into them didn’t look anything like destiny, it looked like delayed dreams and destruction.

In Genesis 37 Josephs’ brothers grew jealous of him so they sold him into slavery for 20 pieces of silver. As a slave, Joseph was blessed by God in all he did. Yes, even though his circumstances were unfavorable, God’s favor was upon him.

My sister, your circumstances do not have to be favorable for God’s favor to be all over you. Don’t get stuck in where you are and miss what God is doing. He is working here. He’s not leaving you here. This isn’t your destiny, this is simply your way there.

In Genesis 39 Joseph is still a slave, but he is put in charge of all his master’s house. Yay, finally something going right for him! But wait, then comes his master’s wife trying to seduce him. When he wouldn’t sleep with her, she is enraged and tries to claim he attacked her. Now Joseph is in prison for a crime he didn’t commit. Circumstances are now even worse, yet God was with him.

Of course Joseph didn’t want to be in prison. He didn’t deserve to be in prison. Prison didn’t look anything like the dreams God had planted within his heart, but this is where he was, so this is where God was working. Genesis 39: 21 ” But the Lord was with Joseph in the prison and showed him his faithful love. And the Lord made Joseph a favorite with the prison warden.”

Favor was found even in the hardship. Can you see favor even with what you are going through? Can you still see God’s hand in the details even when you’re disappointed? Can you trust that he’s not finished yet? This isn’t where you will be forever. This isn’t the end of the story. It won’t always be this way. But for right now, God has you here and he’s going to work through this.

Two years passed while Joseph was in prison. His circumstances did not change during this time. Yet, he was still surrounded by God’s favor. Wouldn’t it be easy to miss blessings and favor when you’re stuck in a place you don’t deserve? Wouldn’t it be easy to grow bitter, to lose hope, and assume things will never change for you? What would happen if you remained faithful in a place like this? What would happen if you didn’t give up in the prison you find yourself in? Maybe like Joseph, you would get to see why God allowed all of this. Maybe you would get to step fully into your destiny after all this delay and see it was all by great design.

While in prison, Joseph began interrupting dreams for Pharaoh, the ruler of Egypt. Having earned trust with Pharaoh, Joseph went from the prison to the palace where he was put in charge of the entire land of Egypt. That’s the crazy stuff God does! The totally unexpected. The bizarre. The phenomenal. The impossible.

Now, 13 years after his dreams as a 17 year old boy where God whispered his plans for his life, he was in a position to fulfill those dreams and save his entire family from a famine. Yes, the brothers who betrayed him were now being saved by him. After all he had been through, he now saw how God had used everything for good. This was the delivery of his dreams.

Joseph said to his brothers in Genesis 50:20 “You intended to harm me, but God intended it all for good. He brought me to this position so I could save the lives of many people.” The saving of many lives was always God’s good plan, but the path there wouldn’t look good. Betrayal, hardship, accusations, setbacks, prison … not good. 13 years of life looking the opposite of the dreams he had given Joseph, but eventually it all came together in ways much greater than Joseph could have ever imagined. God’s plan for his life was so much bigger than he knew.

Don’t be discouraged my sister. You’re on your way. Remain faithful along the way. Don’t grow bitter. Don’t give up. Allow God to guide you, and when things all fall apart again, know that God is designing the breaking for the most glorious rebuilding. Your delay is not your denial. It may take 13 years, heck it may take longer, but God will use everything you have ever gone through to bring you to the place he designed for you. A place where all of this is used for the ultimate good. This will be your delivery to the dreams your creator has placed within you.

By Lonnie|October 19th, 2021|Categories: Devotionals, Podcast|Comments Off on 969 Delivery of Dreams