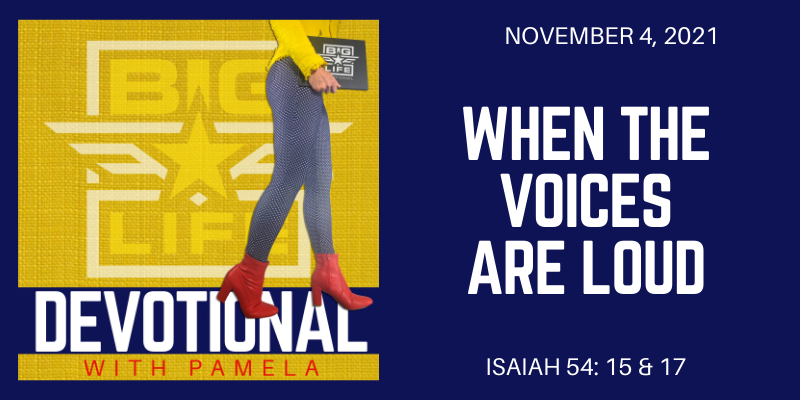 Have you been talking yourself out of the greatness you were created for? You get ready to take the next step, you’re staring down moving forward, then you freeze. Suddenly a terrorist takes over your thoughts, fear fills your body, and negotiations begin. Negotiations to delay. Negotiations to settle. Negotiations to be less, have less, and do less than you could.

How do you break free of this? How do you overcome these voices?

Well, let me assure you, you’re not the only one that hears them. You’re not alone in your battle. Every single one of us are under the attack of this terrorist. However, some are held hostage while others break free.

Why can I speak so directly to the attack of your thoughts and the feelings you battle? Oh sis, because I have them too. Every single time I begin to step into my destiny and walk in my purpose, the thoughts come and the feelings quickly follow. Literally EVERY TIME. Every morning when I sit down to prepare for this podcast, there’s a voice that tells me ‘you can’t do it today … you’ve got nothing!’ Imposter Syndrome kicks in and reminds me I’m really a nobody and I don’t know what I’m doing. The voices are loud. The terrorists in my head seek to take me hostage and render me incapable of taking the next step.

AND THEY WILL, IF I LET THEM.

I’ve learned the secret to overcoming these thoughts and feelings. I’ve learned how to battle them and win. Here it is, are you ready? Three steps.

After you hear the voice:
1. Acknowledge the origin.
2. Get excited for breakthrough.
3. Go.

For me, I hear ‘Pamela, you can’t do this today. You have nothing to offer. You’re done.” Immediately I feel the threat. I’ve tried not to hear the voice, but it’s still there. Every single time, it’s there. Why? Because as John 10:10 tells us “The thief comes only to steal, kill and destroy.” This voice is from the thief. He is enemy of our soul who tries to steal our purpose, kill our potential and destroy our destiny. Recognize it.

It’s not some great mystery. Yes, you’re under attack. Yes all hell is rising up against you. That’s what the enemy does. Yes he picks at your wounds and pokes at your weaknesses. Yes he knows exactly where to hit you and he will show up every time and hit you hard.

And here’s the thing my sister, if you back down, he wins. If you fall victim to the voice that tells you you’re not good enough, then the victory is his and you’re defeated. But it doesn’t have to be that way. He has already been defeated by Jesus. He’s a loser and he knows it. He’s miserable and misery loves company, don’t give him yours!

Once you hear the voice, acknowledge it’s origin. Oh, hello message from the pits of Hell. I won’t be accepting you today. You won’t be depositing into my life. You’re not welcome here. I know where you come from, I know what your intent is, and I know how darn dangerous it is to dance with you.

Know the voice, recognize it, and remember where it comes from. Why would you ever sit and entertain messages from Hell and allow them to hijack your thoughts and rule your decisions? NO MORE!

Now you’re ready for step 2: Get excited for breakthrough. Anytime the enemy tries to rear his ugly head and talk you down from what you’re about to do, you should know what you’re about to do must be powerful. It must be a threat to him, that’s why he showed up to battle you. The voices are a confirmation that what you’re doing is important and it will lead to breakthrough if you keep going. He doesn’t want your breakthrough. He wants you stuck here in misery with him, over-analyzing everything and bowing down to the hardship.

Only good things come under attack. Don’t be shocked when your next step in the right direction is attacked. But here’s God’s decree in Isaiah 54:15 “Whoever attacks you will go down in defeat.” and verse 17 “No weapon formed against you shall prosper.”

This attack confirms you’re doing good, and God promises you can be victorious through the attack. The voices don’t have to be completely silenced for you to be successful. You simply have to know you still have the power to move forward towards your breakthrough, even while the enemy is yacking.

Now, when I feel under attack, I know I must be about to step into a new level of living offered by God. Of course the devil doesn’t want me stepping on up, so he whispers his lies to try and defeat me before I step. But now that I know the truth, when his lies show up on the scene, I get excited because it’s nothing more than confirmation of the goodness that is here for me.

Now, step 3: Go! Get going girlfriend. The only proper response to the voices that tell you you’re not good enough is to show up with the power of God coursing through your veins and do it any way! You respond to the voice that tells you you can’t by getting started. For me, that means I start typing a new devotional even while the voices are screaming “you can’t do this today, you have nothing!”

What do you think inspired this devotional today? Yip, the voices. They were extra loud this morning. But no weapon formed against me shall prosper. Whoever attacks me will go down in defeat because I know exactly what to do with this attack.

It’s all normal. You’re totally normal. But you’re called beyond this. Go. Even when the voices are screaming you can’t. Even when you don’t feel like it. Even when the fear is still on a rage in your head. Your breakthrough awaits. Your next step is of tremendous value. TAKE IT NOW!

By Lonnie|November 4th, 2021|Categories: Devotionals, Podcast|Comments Off on 981 When The Voices Are Loud