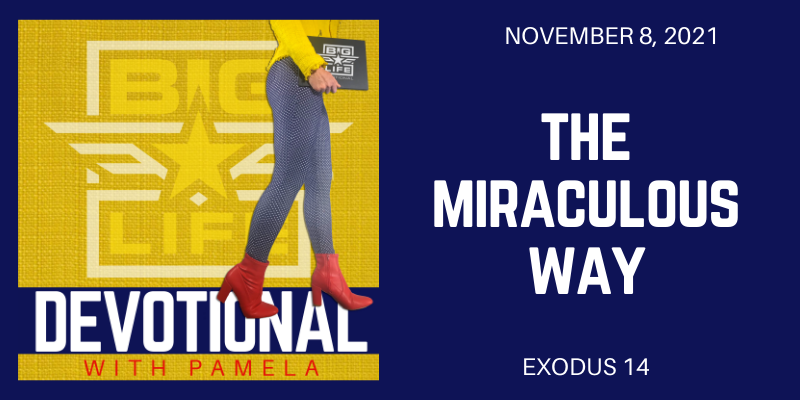 What if the very thing you’ve been asking God for is right in front of you, but it doesn’t look like you imagined it would? What if his answer is here, but it’s not the answer you thought you would get? What if the way has been made, but dang this just isn’t the way you had in mind?

Will you miss it because it’s different than what you thought? Will you delay because it’s not your way? Will you stall here when God has worked in miraculous ways to move you forward?

Exodus 14 tells the story of the Israelites running for freedom from the Egyptians who had held them as slaves for centuries. Led by Moses, they came to an impossible pass. In front of them was the Red Sea where they would surely drown. Behind them was the army threatening to kill them. There was no way around. This was it.

And here at this impossible pass, God made a miraculous way. Exodus 14: 21-22 “Then Moses raised his hand over the sea, and the Lord opened up a path through the water with a strong east wind. The wind blew all that night, turning the seabed into dry land. So the people of Israel walked through the middle of the sea on dry ground, with walls of water on each side!”

That’s a miraculous way. God literally split the sea and stood the water on it’s edges for them to pass through. Wild winds created dry ground where water was 100 feet deep moments before.

What we don’t read about is standing on the edge of the Red Sea, seeing 100 foot walls of water on each side of a divide, only held by wild winds, and questioning what this is. But you know there had to be question. There had to be fear. In fact, I wonder if there were some who were so scared by the water, that they refused to walk the path?

Could this be us right now? God has done miraculous things for us, but miraculous doesn’t look easy. It doesn’t look certain. It looks more like a raging sea held back by something invisible that could come crashing down at any moment. And maybe we’re missing the way God has made for us because it really doesn’t look like the way we would have chosen.

Were there Israelites who refused to move forward? Likely so. Were they too afraid to take their family into the depths of the sea without guaranteed it wouldn’t come crashing down on them halfway through? I would imagine so. And the ones too afraid to go would have faced the inevitable fate of the army chasing them. But sometimes facing what we know is easier than facing what we don’t.

My sister, God has heard your prayers. He is near you and over ever detail concerning you. He is here now making a way, but his way may be something you don’t understand and have never seen before. This will require you to step into the unknown and trust the God you know. This will require you to make hard choices, take chances, and trust God will guide you through what you do not understand.

You know what will happen if you stay here and do nothing to change. You know the threat of the enemy who has been chasing you. But do not allow the familiarity of the devil you’ve been fighting woo you into surrender when God is calling you forward. There is a way here, a miraculous way. And miraculous ways do not look like our ways. If they did, they probably wouldn’t be miraculous. Be bold enough to step into these things you do not understand, trusting God is guiding your every step.

Proverbs 20:24 “The Lord directs our steps, so why try to understand everything along the way?”

If you back up a few verses in Exodus 14 to before God parted the sea, God says in verse 15 ““Why are you crying out to me? Tell the people to get moving!”

Maybe we’ve been sitting here crying for far too long. Maybe God is saying to us now “Get moving! Trust what I am doing here. You’re never going to understand what I’m doing until you get in the middle of it, then you will see. But right now, you just have to move forward.”

Imagine walking through dry ground with 100 feet of water standing on each side of you, held up by nothing but wind. Imagine knowing you’re going to be walking through this for a distance that will be highly uncomfortable and extremely uncertain. Imagine trusting in something you simply can’t understand.

This is the miraculous way. We read about it and know it’s miraculous. But when you’re in the middle of it, it feels nothing but uncertain, uncomfortable, and the scariest dang thing you’ve ever gone through.

Back on the shore, you know the enemy is closing in. You know the intent is to steal, kill and destroy. But in order to see the miraculous way God is making you must turn away from the attack. You must turn your back to the enemy you know and face the way you do not. And let me tell you, this takes tremendous courage.

I wonder how many Israelites never even saw the parting of the Red Sea because they never turned away from their attack? Maybe they stood on the edge of their miraculous way without turning to see it because they were fixated on their problem. They were reliving their hardships, retelling their defeat, and dwelling in the certainty of their doom, never turning around to see what God had made possible for them.

They just wanted to go back to being slaves in Egypt. They were ready for surrender. This freedom thing wasn’t working out well for them. They just didn’t know God had made a way for their victory here.

Girl, have you been staring at what was, telling the same story again and again, and missing what God is doing on the other side? Are you willing to take your attention off the attack for a moment and turn around to see the way God is making here? Just because this freedom thing isn’t easy, doesn’t mean you surrender and return to bondage.

Jesus came to set you free, free to live the great BIG life you were created for. No matter what you’ve gone through before, no matter what is in your past, and no matter what is trying to chase you down and drag you back, God is making a way for you here. A way through the impossible. A way forward.

But remember, it may not look the way you imagined. It may be scary as heck and require faith you didn’t even know you had. You won’t understand it, but you’re not supposed to. This is the miraculous stuff only God can do and he says to you, “get moving!”

By Lonnie|November 8th, 2021|Categories: Devotionals, Podcast|Comments Off on 983 The Miraculous Way