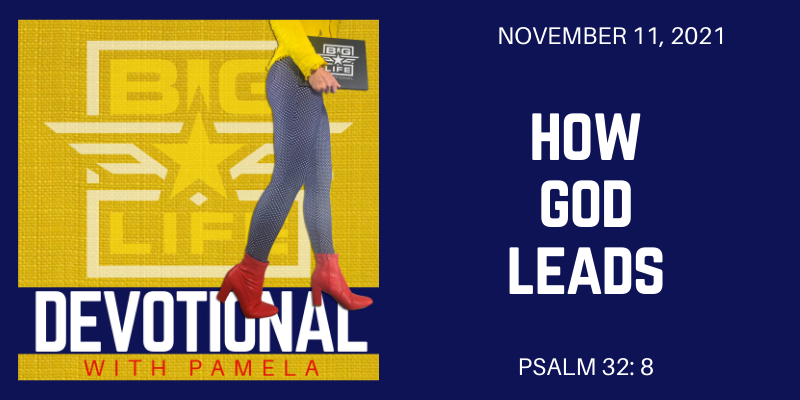 Have you ever noticed how one thing leads to another in your life, and you end up in places you never imagined in the beginning? Something small and seemingly insignificant can be the segway to something so much greater in your future. But when you’re in the small stuff only longing for the bigger stuff, you can’t see the greater stuff it’s leading you to.

I know you want to skip this small stuff. I know you want to avoid the hard parts. But sis, if you could only see how this is an integral part of God’s greater plans for you, you wouldn’t hate it so much. You would appreciate God’s miraculous design of your journey if you could only see the end game. Not to spoil this or anything, but girl it’s going to be so good! God knows the plans for you, and they are plans to prosper you, not to harm you. They are plans for a future you can hope in. (Jeremiah 29:11).

But God doesn’t always reveal his plan to us in advance. He doesn’t give us a roadmap with a starred end destination. He sets our feet upon a path and invites us to follow him one step at a time, one day at a time, trusting as he guides us through uncharted territory on unknown routes.

I often think God likes to take me on the backroads. We never seem to be on the interstate cruising along at 75. But maybe that’s because God doesn’t want me going so fast. Maybe he doesn’t want me to rush through this. Maybe these backroad routes to my destiny are God’s best plan for me.

Psalm 32:8 The Lord says “I will guide you along the best pathway for your life. I will advise you and watch over you.”

God knows the best pathway for your life. You may think you do, but God sees what you do not see. He knows how this road leads to the next road and that intersection is necessary for your destiny. And god in all of his wisdom knows if he reveals it all to you right now, you would either grow so excited you would miss what’s here now, or you would get so overwhelmed you would stall out and stop right here. That’s why God’s job is to guide and your job is to follow.

Last night I sat around a table with a few beautiful podcast listeners in the tiny town of Sonora, Texas. They said, “each day it’s as if you’re talking right to me.” As we hugged goodbye I said, “be sure and listen tomorrow because I won’t only be talking right to you, I’ll be talking about you!” I heard their stories and we laughed over God’s unique way of guiding us in our lives. How a few of us sitting around that table were fired from jobs (myself included). How at the time it was the worst feeling ever. Such disappointment. Such fear. So embarrassing. So painful. But so necessary. So necessary because God had been inviting us down a different path but we had avoided it. So, he lovingly stepped in, slammed the door and said ‘now you’re done here!’. Redirect.

This is what intersections on our journey look like sometimes. We hit the dead-end and we realize we took this as far as it could go, but God’s not done with us yet. This is where we finally allow him to guide us along the best pathway instead of settling for the pathway we were already on.

Thank God for dead-ends! I don’t know where that path would have taken me if I would have been allowed to keep going, but I know it wouldn’t have been nearly as good as the one God had planned for me.

12 years ago today I woke up to what I thought was a big ol’ mistake. The day before, in an effort to help an old high school friend who had lost her passion for living and found herself burned out and stressed out as a single mom of 4 little boys, I had started a page on Facebook. That page, per her request, was called the Smokin’ Hot Mama Club. Being new to Facebook 12 years ago, I didn’t understand this page was public and others could see my daily attempts to guide her in finding her joy and happiness again.

So I woke up the next day to 40 other people on our shamefully named ‘Smokin’ Hot Mama Club’ page seeking the same thing. (okay, maybe 3 of the 40 were fellas looking for a love connection if I’m being honest). And y’all, that’s for real how it all started! No joke. I was just trying to help one mama, and that all led to this 12 years later. I thought it was a mistake, but the thing is, I didn’t know how to correct my mistake. I didn’t even know how to delete the Facebook page, so it remained. And it grew. So I went with it.

Isn’t God funny like that? And isn’t he sneaky like that? He sneaks in little things that seem so insignificant and he allows them to grow and evolve and lead to greater things. But he knows if he shows us the greater things in the beginning we will be so distracted we’ll crash and burn.

Girl, you have no idea where this is leading you. God’s not finished with you and this path you’re on is not the end. This is so much bigger than you see right now. You think you want to see the future, but God knows it’s best for you to focus on the step right in front of you.

Isaiah 58:11 “The Lord will guide you continually, giving you water when you are dry and restoring your strength.”

I had no idea where this was all leading, but today I see it led me to you. It led me to being a voice in your life today to encourage you to keep going, and I would say it was all worth it! Stumbling into creating a facebook page with the most ridiculous name, being fired from a job I thought I had to have, swinging big a few times and striking out terribly … well that was all part of the plan to bring me here.

And all the twists and turns in your life have been for a purpose as well. It’s all to guide you to the good plans God has for you. Don’t be discouraged because you don’t know what’s next … you’re not supposed to know what’s next. Don’t dwell in disappointment over the things that didn’t work out. God is now using that for good. Don’t be overwhelmed by all you have to do in this phase of the journey, strength will be provided for every step and you will get through this.

Now know this, this isn’t the end! There’s more and God is inviting you to keep going with him. I hope you go.

By Lonnie|November 11th, 2021|Categories: Devotionals, Podcast|Comments Off on 986 How God Leads