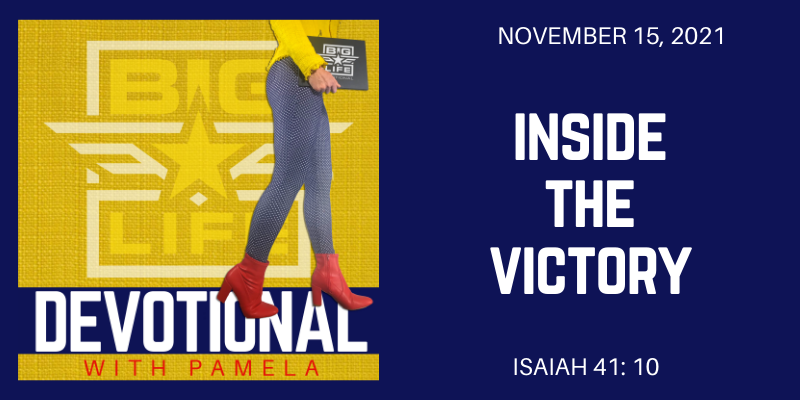 The right hand of God is his hand of righteousness, power, and victory. And did you know, this is the hand that holds you? He has surrounded you by his power. He has covered you by his righteousness. He has placed you in his victory.

This is where you are today. In his right hand. Perfectly placed in victory. Completely covered by his righteousness. Securely surrounded by his power.

When you know that, it causes you to wake up differently. It causes you to live this day different when you know God holds you in his strong and mighty right hand. This is where your confidence comes from. This is your source of joy and strength. This is how you keep going when everything seems against you. When you know this battle will end in victory and triumph will be yours, you show up for the fight! You lift that head again and you dare to rise.

Isaiah 41:10 “Don’t be afraid, for I am with you. Don’t be discouraged, for I am your God. I will strengthen you and help you. I will hold you up with my victorious right hand.”

And girl, if God is holding you up, what could ever bring you down? If God is giving you strength, what could possibly make you weak? If the Almighty is your God, then what do you have to fear?

Maybe you’re looking around today and you’re seeing the reality of less than perfect situations. You have problems. You have stresses. There are messes for you to walk through and hard work for you to do. Okay, that’s life. But that doesn’t mean you should be discouraged. That doesn’t mean you should fear. God is still holding you in his victorious right hand. Oh, but we assume that means we are lifted high above all the problems. We assume that means we are insulated from the battles. No girl, that actually means you’re right in the middle of them. Let me give you some perspective today.

God holds us up with his victorious right hand, but do you know what else his right hand is doing? Check this out …

There’s a barrier between you and the enemy. That barrier is the hand that holds you tight, and the hand that smashes the enemy. Oh he will come at you, but he doesn’t get you! God can do that! He can hold you securely while defeating the enemy completely, all with the same hand!

I don’t know, I always assumed being held by God would look more like peaceful streams and shade trees. You know “he maketh me lie down in green pastures.” But don’t forget the 23rd Psalm also says “tho I walk through the valley of the shadow of death.” That means being surrounded by threats but still moving forward. That means darkness ensues, but the light is pursued.

Now I understand being held by God looks more like peace when it makes no sense to have peace. Victory when defeat seemed certain. The next step made possible when everything says it was impossible. It looks more like going through the fire and coming out on the other side to tell about it. It looks like riding out the storm, walking on water, and being caught every time I begin to sink.

Why does life look like this? Because the same hand of righteousness that holds us is the hand that smashes the enemy. We’re held, yes. But we’re also in the battle. We’re victorious, yes, but we’re also participating in how the victory is won. God will let you see the battle. He will let you feel the attack. He will allow you to see the threat. But know this, as the enemy closes in, the hand which holds you will smash him in defeat. HE WILL NOT WIN THIS!

Isaiah 54:17 “Weapons made to attack you won’t be successful; words spoken against you won’t hurt at all. My servants … I, the LORD, promise to bless you with victory.”

You may be under attack, you may feel that attack, but know with absolutely certainty, that attack will NOT be successful.

Things may be said about you, rumor may spread and some might believe it to be true, but my sister, this will NOT stop God’s good plans for you. This will not hurt what God is doing. His hand will shield you. His hand will lift you up. He has promised to bless you with victory. Stop stressing about what is being said. What is said cannot hurt what God has declared for you.

The hand that holds you is also the hand that defeats the enemy. You’re going to see some crap and feel the rush of the wind in your hair as you get thrown about because that hand is swinging and connecting to smash the devil that has come to attack you. But do not fear and do not be discouraged, you are held tightly in this victorious right hand of the Almighty and you’re being used to defeat the enemy!

By Lonnie|November 15th, 2021|Categories: Devotionals, Podcast|Comments Off on 988 Inside the Victory