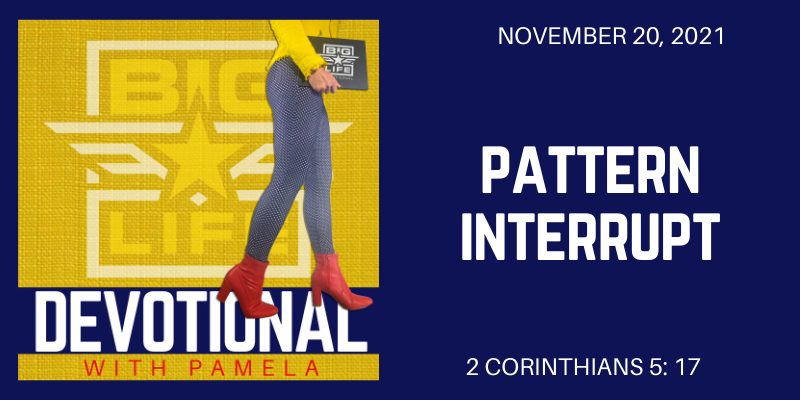 What if you’re operating from an old identity when a totally new you is in the offering? What if who you used to be has absolutely nothing to do with who you are becoming? What if God has declared you’re now a different person and the things that once defined you will no longer be moving forward with you?

You know something, God does that. God offers a new identity. He changes names. He declares what was is no longer, and now the new is here. And maybe, just maybe, it’s time for the new you to show up and step into the life now available to you.

In scripture, Abram became Abraham, Sarai became Sarah, Simon became Peter. In each instance, God changed their name to declare who they were becoming was greater than who they had been. A change in identity was required to reach their potential and fulfill their purpose. Names were to mean something. Abraham meant “father of many” which was important to a man who waited 100 years to have his son Issac. Sarah meant “princess”, a promise that this barren woman would become a mother to future nations and kings. Peter meant “rock”, an affirmation to the most unstable, unreliable, irrational person in the boat whom God had great plans for.

In each case, a new identity was given. A name of meaning that called them into their life of purpose. But perhaps what we miss is the deeper value in a name change … they changed how they saw themselves. Abraham now saw himself as the father of many, Sarah now knew she was positioned in royalty, and Peter now responded to the potential within him rather than the problems around him.

Who do you say you are? How do you see yourself? Have you declared you are who you are, and that’s who you will always be? Have you assumed the position of forever being this way, destined to struggle with the same things, repeating the same patterns, living out the same patterns?

2 Corinthians 5:17 “Anyone who belongs to Christ has become a new person. The old life is gone; a new life has begun!”

You’re not who you used to be because God has declared you new. You don’t have to do what you’ve always done because Jesus has interrupted your pattern. You’re free to see yourself differently, show up for your life as a new person, and never go back to your old habits again.

I grew up as Pam. I never liked my name. It always felt plain with no significance. In my mid-twenties I started a business and started trying to appear more professional, so I bought ridiculously stuffy buttoned up business suits to appear older. I quickly learned they just made me feel boring, so I ditched them. Then I decided to change my name. I became Pamela. Pamela felt more professional, a little fancier, and more memorable. And when said in Spanish, it felt a little spicer. One day, I just showed up as Pamela and I’ve never gone back.

How did I do it? I started referring to myself as Pamela. I signed Pamela. And eventually, everyone else started calling me Pamela as well. I was no longer Pam. In fact, Pam now sounds foreign to me although it’s what I grew up with. I am Pamela. All because I made a decision to change it, I started referring to myself as such, and eventually I saw myself differently.

So sis, maybe it’s time to change your name. Maybe not your actual name, but the names you call yourself. The identity you claim. The traits you have declared as yours. You’re free to choose something else now.

When you’re a smoker, what do you do? You smoke. Smokers smoke. What do non-smokers do? They walk, they breathe, they laugh, they smile. They do all sorts of things, they just don’t smoke. The day you no longer identify with smoking is the day you’re know you’re no longer a smoker. It’s not who you are anymore, so it’s no longer what you do.

You are not who you used to be sister, so you don’t have to do what you’ve always done. You’re free to change. Jesus paid the price for your freedom from this. Every single thing the enemy has ever used to hold you captive and hinder you from living up to your greatest potential, has been defeated. Jesus went to hell, grabbed the keys, and set you free! That lock and chain is no longer yours to play with.

Maybe you’ve always struggled with mornings. Morning comes and you’re dead tired. You and the snooze button have a long standing affair. You identify as “NOT a morning person”. So, what is your body supposed to do other than greet mornings with haste? You’ve put on the label of not being able to handle mornings properly. You’ve assumed the position of being incapable of waking up with care and intention. So, that’s what you get. You get struggle. You get the self-fulfilling prophesy of sucking at mornings … and that sucks.

How does this happen? Change how you see yourself and how you refer to yourself. It’s the pattern interrupt. I’m no longer who I once was. I’m someone different now. I’m free to change, and I’ve decided I will accept the offer of Jesus and step into that change.

Stop leading with your faults. Stop allowing your struggles to be your guide. Your failures don’t have to determine your future. The pattern is being interrupted here and Jesus says he is making you new. He says he started something good in you and he’s not finished yet. He says you’re not obligated to continue this pattern any longer.

Now, when I’m at Starbucks I’m Peyonce (you know, like Beyonce with a P) and I walk with an extra pep in my step because I can.

By Lonnie|November 22nd, 2021|Categories: Devotionals, Podcast|Comments Off on 993 Pattern Interrupt