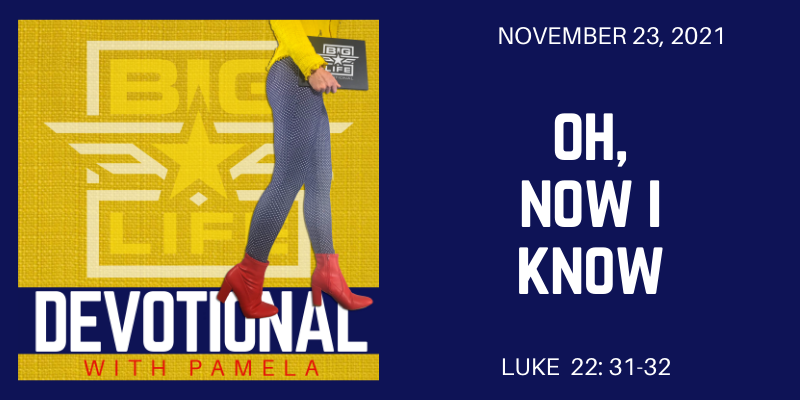 Maybe you’ve been asking why. Maybe you’ve been trying to understand what is happening right now in your life. Ahhhhh, this is for you sister! God has been whispering to my spirit a message this morning to share specifically with you. You ask why, here’s your answer: Because Satan has asked to sift you.

Yes, that’s it. Plain and simple, the enemy has asked to attack you. He has asked to shake you up. He’s asked to strip you of a few things to see if you’ll still stand in faith through it all. And Jesus in confidence has said, “Yes, sift her. Then I’ll use it all for good when you do.”

Girl, I’m not making this up. It’s all in scripture and it’s been there all along. Somehow I saw it for the first time today. At the last supper when Jesus is sharing his final meal with his best friends, knowing he was about to face crucifixion, he warned Peter of this sifting.

Luke 22: 31-32 Jesus said “Simon, Simon, Satan has asked to sift each of you like wheat. But I have pleaded in prayer for you, Simon, that your faith should not fail. So when you have repented and turned to me again, strengthen your brothers.”

First of all, Jesus is talking to Peter, but he calls him Simon. He not only calls him by his old name, he says it twice, “Simon, Simon.” What’s the significance of this? He’s saying who he used to be is going to show back up. The old impulsive, impatient, temperamental version of him is going to take over for a hot minute. Although he has now been called to be Peter, the rock on which Jesus would build his church, there’s still some Simon in him. Jesus gave him a new name, but the old Simon is still in there. And guess what, Jesus is okay with that.

Jesus is making you a new person. He’s transforming your mind, changing the way you think. He’s helping you respond instead of react now. But he knows while he is making you new, that old you will still be battling inside. I heard Steven Furtick on the Elevation Podcast say it like this, “Although Peter was the new name of Simon, Simon was still inside of him.”

So Jesus is speaking to the old Peter, Simon. The one he was trying not to be any longer. And he says “Simon, Simon, Satan has asked to sift each of you like wheat.”

This is a real oh crap moment. Peter must have been like “did you tell him no?!!!! Come on, please tell me you told Satan no. Don’t let him sift me.” But Jesus says “I have pleaded in prayer for you that your faith should not fail.”

So here’s Peter trying to be this new version of himself, faithful follower of Jesus, a solid and steady rock Jesus would trust to build his church on, and he’s being called by his old name, remembered for who he used to be. Dang, that sucks. But this is actually great news for you and I. This means even when we stumble and go back to our old ways, even when we fail to show up as this new and improved version of ourselves, Jesus still says “I’m pleading for you.”

Yes, even when you’ve screwed up sis, Jesus is on your side. Even when you’ve just wasted all the progress you’ve made and fallen right back into your old ways, Jesus is standing right beside you. He’s not walking away. He’s not giving up. He’s pleading for you. Speaking on your behalf, stamping his name on your ID, covering your sins with his blood.

It means he has asked to shake you up. Come at you with uncertainty, chaos and hardship. Oh, would you look at that, that’s exactly what you’re dealing with! You’re in the sifting. We’re talking about the sifting that separates the wheat from the chaff. I had to look up a video to see sifting for myself. I wanted to understand the process because y’all I buy my wheat in the form of Gold Medal brand flour. Sifting is a constant shaking which causes the good stuff to fall through the tiny openings, keeping the extra and unnecessary stuff out. Only the berries of the wheat make it through. The process is repeated with smaller and smaller screens, refining the wheat more and more. Less and less makes it through as the excess is removed.

I also read the old-fashioned way to do this was to spread the wheat on a stone floor, and beat it with a flail. Yip, beat it! Sometimes life feels like a beating. That’s the sifting. After beating the wheat, it would be thrown in the air and the lighter chaff would be blown away, only the heavier grain would fall back to the ground. So now we’re thrown and we’re falling.

Got it. That makes sense. This is what we’re going through.

And to this Jesus says, “Satan has asked to sift you”, meaning he’s asked to shake you up and strip you of the extra, beat you and throw you around so you fall. And Jesus didn’t say he was going to stop him. He’s going to allow this. Why? Because he knows ultimately it will be used for good.

Jesus simply says “I have pleaded in prayer for you.”

So, while you’re going through this sifting that was perhaps orchestrated by Satan, know that Jesus has pleaded for you and God’s good plans still stand. You will survive this sifting. The excess may be stripped, but your faith will stand.

The purpose of what you’re going through is revealed in this same scripture. Jesus says “when you have repented and turned to me again, strengthen your brothers.” Jesus knew Peter was about to deny him. He was about to act like his old self again. He would stumble, but this failure would not be fatal. Jesus had already made a way back, and nothing would be wasted.

What Peter was about to go through was for the purpose of being used to help others. And isn’t it still helping us today? Isn’t it showing us that Jesus doesn’t give up on us in our struggle. He doesn’t abandon us when we fail. He knows in advance all the ways we will measure up short, and he chooses us anyway and pleads on our behalf.

So Satan comes in and says “hey, I want to sift Peter.” And Jesus says “go for it because I will use it all for good. In the year 2021 I will use it for good in the life of one of my girls. She will hear about this and know she is still worthy even though she has failed. She will know I haven’t given up on her either. So you do your sifting, the extra was never needed.”

If you’re going through the sifting, remember God wants to use it to refine you and help guide others. It may be orchestrated by the enemy, but it will be used by the Almighty.

No weapon formed against me shall prosper. The enemy plans the sifting as an attack, but God uses the refining for good. Jesus is pleading that through it all, your faith would not fail. Your faith may stumble. It may be shaken. You may do stupid stuff in the moment. But ultimately you will turn back to Jesus and God’s good plans will prevail.

Oh, now I know. Now I know what’s happening here. Sifting. Shaking. Separating. But I’ve been pleaded over by Jesus, and so have you. May we continually return to him through it all, and be refined to be more and more like the person we were created to be.

By Lonnie|November 23rd, 2021|Categories: Devotionals, Podcast|Comments Off on 994 Oh, Now I Know