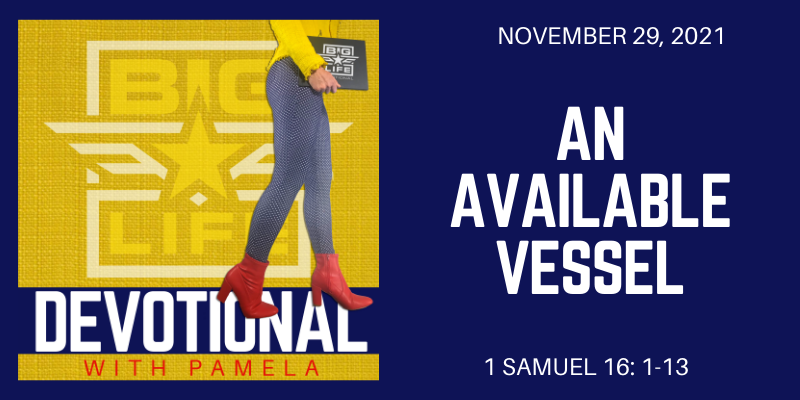 Do you ever hear something that just resonates in your soul and starts a chain reaction of insight within you? It’s as if the Spirit says ‘yes, I wanted you to hear that, and now hear this too.’

This morning I read a quote about David being chosen by God and it started that chain reaction of insight within me. Woah … are you ready for this? Here’s what I read:

“David didn’t submit a resume, but God told Samuel about him. May God mention you to someone who will take you to your next level.”

That’s a feel good statement right there. Hot dang, what if God is going to mention you to someone who can open some great doors for you? But does God do that? Where does this come from? So I began studying. How did God tell Samuel about David? What happened here and could it happen for you and I?

This is legit like a Cinderella story. You remember how the Prince sends out a servant with the lost glass slipper to find the beauty he danced with the night before. And whoever the slipper fits must surely be his bride. Remember how the step-mother lines up her daughters believing they are the right ones, trying to cram their big ol’ feet in the tiny glass slipper, but no fit. Then, the least likely of all, the step daughter who was kept busy doing chores shows up and tries on the slipper, and it was a perfect fit. It is Cinderella! Who would have ever guessed.

Samuel has been chosen by God to select Kings to rule and lead Israel. Why did God chose Samuel for this position of influence? Simply because he listened and he obeyed completely. He didn’t seek to be King himself, he simply desired to be used by God to fulfill his appointed purpose. God doesn’t call everyone to be King. Samuel was okay with that. He was available for however God wanted to use him, and wow did he ever use him in mighty ways.

First Samuel, guided by God, chose Saul. Saul was King for 20 years, until God rejected him. Do you want to know why God rejected King Saul? Because he didn’t obey. He began doing things his own way and God took away his power and his throne. Now Samuel was to select a new King chosen by God, but how would he find him?

Now the Lord said to Samuel, “You have mourned long enough for Saul. I have rejected him as king of Israel, so fill your flask with olive oil and go to Bethlehem. Find a man named Jesse who lives there, for I have selected one of his sons to be my king.”

But Samuel asked, “How can I do that? If Saul hears about it, he will kill me.”

“Take a heifer with you,” the Lord replied, “and say that you have come to make a sacrifice to the Lord. Invite Jesse to the sacrifice, and I will show you which of his sons to anoint for me.”

So Samuel did as the Lord instructed. When he arrived at Bethlehem, the elders of the town came trembling to meet him. “What’s wrong?” they asked. “Do you come in peace?”

“Yes,” Samuel replied. “I have come to sacrifice to the Lord. Purify yourselves and come with me to the sacrifice.” Then Samuel performed the purification rite for Jesse and his sons and invited them to the sacrifice, too.

When they arrived, Samuel took one look at Eliab and thought, “Surely this is the Lord’s anointed!”

But the Lord said to Samuel, “Don’t judge by his appearance or height, for I have rejected him. The Lord doesn’t see things the way you see them. People judge by outward appearance, but the Lord looks at the heart.”

“There is still the youngest,” Jesse replied. “But he’s out in the fields watching the sheep and goats.”

“Send for him at once,” Samuel said. “We will not sit down to eat until he arrives.”

So Jesse sent for him. He was dark and handsome, with beautiful eyes.

And the Lord said, “This is the one; anoint him.”
So as David stood there among his brothers, Samuel took the flask of olive oil he had brought and anointed David with the oil. And the Spirit of the Lord came powerfully upon David from that day on.

See, I told you it was like Cinderella. One by one, the most likely of Jesse’s sons were presented. And every time Samuel thought ‘oh this must be the one’, God said, ‘nope, not that one, there’s another.’ The least likely son wasn’t even invited to the event. He was left out. Gosh, sometimes doesn’t it feel like you’re just left out? Looked over, not included and not considered. Like all you do is work without recognition.

But girl, as you work and everyone overlooks you, know that God sees you and he himself will make things happen for you. Colossians 3:23-24 “Work willingly at whatever you do, as though you were working for the Lord rather than for people. Remember that the Lord will give you an inheritance as your reward, and that the Master you are serving is Christ.”

David was out working in the fields while his brothers had been chosen to be with their Father. But David wasn’t working for anyone other than the Lord. He was willingly, without complaint or haste, out working that day. And this is EXACTLY what God is looking for!

Even though David was not invited to the gathering to be considered for selection, nothing happened without him. They waited for his arrival, in fact they didn’t even sit down until he was there. And when David walked in, the youngest and most unlikely of all the sons, God said to Samuel “This is the one. Anoint him.”

King Saul whom God had rejected was no longer an available vessel for God’s powerful spirit. He had failed to obey in the little things, and those little things were growing to bigger things. God can’t work with that. Saul’s position and power were to be stripped from him, and it was to be given to David. The one no one else would have chosen. The one who was simply being faithful with his current work and God knew that meant he would be faithful with greater work.

David didn’t have to fight his way to the top. He didn’t have to plead his way in. He didn’t even apply for the job. He was out working in the fields taking care of the goats and sheep, and he was called in to the meeting that was already taking place. He wasn’t even present for the first selections, or the second, not the third or the fourth. He was eighth.

We have got to stop playing the influencer game. Who gives a flying flip how many people follow you, like you, or comment on your posts. God didn’t create you to make up these fake conversational pieces to pretend like you care what anyone else has to say. This is nonsense. If you’ll stop playing that game and be faithful with what God has given you to work with now, he will set you up for more than you could ever imagine.

You know you’ve already been chosen … you just may not know the details of it all yet.

I know you’re ready for your next level, but it’s your faithfulness on this level that will prove you’re truly ready. It’s your non-circumstantial happiness, your intentional good attitude even when things are going bad, your work ethic HERE and NOW, that positions you for future promotion. Yes, God has promotion in mind for you, and no, he doesn’t need anyone else to see that potential in you. When the time is right, he will make it known and even if you’re still the least likely of all, the most under qualified, the last one called in, God will make it happen because YOU ARE THE ONE!

No, David didn’t submit a resume, heck he wasn’t even invited to the meeting. But he didn’t need to be. God told Samuel where to find him and made it clear he was the right choice. And sis, when you’ve proven yourself faithful, when you’ve grown through the hardships and learned God’s truths about you, God will call you out. He will make it clear that YOU, YOU’RE THE ONE.

When will it happen? When you’re being faithful with the work you already have.

Where will it happen? In a place you weren’t even invited to be.

How will it happen? In a way only God can orchestrate.

Don’t try to figure this out. Just be an available vessel for his power!

By Lonnie|November 29th, 2021|Categories: Devotionals, Podcast|Comments Off on 998 An Available Vessel