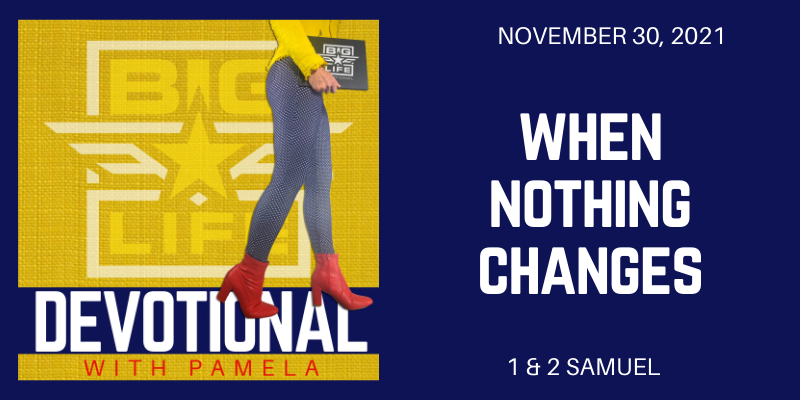 Who said circumstances were guaranteed to change immediately after your encounter with God? Sometimes we have a true encounter with God, we feel his touch, we receive the confirmation of his Spirit within us, but we walk away disappointed because nothing major changed that day. We dismiss our experience because there is no evidence of change around us.

But Sis, when you plant a seed, do you immediately see the harvest? Is there immediate physical evidence of the growth happening within? No, of course not. This growth takes time. The seed’s potential is there when you see it sprouting up, and when you see nothing happening above ground just the same. The seed’s potential is the same both when it is planted and when it is in bloom.

You and I are the same. Our potential is there, but we don’t always see the growth happening in the space of time between planting and blooming. We want evidence of God’s power in our lives, and when we don’t see it or feel it, we assume it must not be working. We aren’t chosen after all. We aren’t anointed or appointed for a destiny designed by the Almighty. Clearly not, because not a dang thing seems to be changing.

Oh but girl, let’s go back to the story we studied yesterday in episode 998. Remember, it was like the Cinderella story. Samuel is sent by God to Jesse’s house to find who God had chosen as the next King of Israel. Jesse proudly paraded all 7 of his sons in front of Samuel for selection, but one by one, God said ‘not him.’ Then Samuel said ‘are these all of your sons?’ Jesse said, ‘ahhhh, I’ve got one more boy but he’s out working in the fields.’ Surely it couldn’t be him. He’s the least likely of the whole family. But when the 8th son came before Samuel, God said ‘Anoint him, he is the one.’ This was David. The future King David. The mighty man of God, chosen by God, called by God, and now anointed.

So, what happens next? Does David’s whole life change? Did everyone just bow down to him immediately? Did he take his position in the palace? Was he given a crown? Actually no. Nothing at all changed. David went back to the fields and continued working with the sheep and goats.

Sister, you’ve been chosen. You’ve been called. And maybe you’ve already been anointed for a great purpose in your life. Maybe you’ve dismissed that because nothing really changed for you. You haven’t felt a dang thing since. But just because you haven’t seen a change in your circumstances doesn’t mean a change isn’t coming.

Time passes after David is anointed and the spirit began to work powerfully within him. David is still just a shepherd boy. He’s still wandering through fields, sleeping with goats and rescuing sheep in trouble. Then, one day he’s on his way to take lunch to his brothers who were in the Army, and he sees something he can’t just walk away from.

What does he see? He sees a giant of a man named Goliath taunting his people. He sees his people cowering in fear. And that powerful spirit that is now within David rises up and says, I will slay him! And he does!

Finally, something happens after David had been chosen. Something finally worth hearing about after this anointing. Until then, nothing had changed in his life. But just because nothing was changing didn’t mean nothing would ever change.

We get discouraged in this time in between. We start believing there’s nothing special about us because nothing is happening for us. We start questioning God’s divine plan for our lives because things didn’t change after our first encounter with God. But my sister, let me tell you what God is revealing to me … he is in no rush here. He’s not panicked trying to propel you forward to get you in position faster. He holds all the time in the world in his hands and he knows when the time is right he will make it happen. While you can’t see it, he knows what’s going on below the surface is something magnificent for this seed he has planted. He knows of the future blooms it will hold, but he’s not willing to rush the slow process of development.

God gave Ezekiel a vision of a valley of dry bones coming to life again and with that vision, these prophetic words “My servant David will be their king, and they will have only one shepherd.”

This is why David would have all these years of nothing changing after his initial anointing, he had to know how to be a shepherd. This was training for his future purpose. This wasn’t a waste of time. This wasn’t a delay of his destiny. This was all preparation for his purpose. It seemed like nothing was changing and time was just passing, but this was training. He had to know how to shepherd sheep in a field before he could shepherd an entire nation as their King.

Maybe that’s exactly what is happening right now in your life. While nothing seems to be happening and you only feel more of the same, you are being prepared. You are being trained. This time is of tremendous value and nothing will be wasted. Your calling is still the same and you will step into it, but you’re not ready to step into it yet. You’re learning here. You’re growing here. You’re being trained and prepared here. And when God says it’s time, girl you will be fully ready for the purpose God has chosen you for!

Don’t let the enemy discourage you during this time of preparation. Yeah, you don’t see any major changes, but change will come and when it does, you will be ready! Remember, you are chosen. You were created for a purpose. You have a divine destiny and today is part of your journey there.

By Lonnie|November 30th, 2021|Categories: Devotionals, Podcast|Comments Off on 999 When Nothing Changes