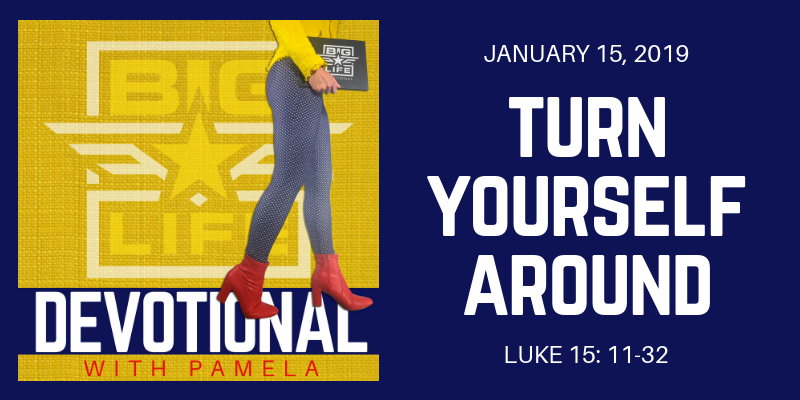 Luke 15: 11-32 Jesus tells the story of the prodigal son. A wealthy man had 2 sons. The younger son demands his inheritance early, leaves home with his money and wastes it all. He loses everything and ends up sleeping and eating with the pigs. One day he remembers who he really is, and decides to return to his father and beg forgiveness. My favorite part of the story is verse 20, “But while he was still a long way off, his father saw him and was filled with compassion for him; he ran to his son, threw his arms around him and kissed him.”

While he was still a long way off, the father ran to him. I find that interesting because when the son left, the father didn’t run after him. But when he was returning, he did. When the son left home, there was a point the father could have easily seen him and called to him. He was still close in distance. Now the son is returning home and is now far in distance, farther than before, but the difference is in his direction. The father’s response to the son was not because now he’s close to him and before he was not. No, the father’s response is because of the son’s direction. He has turned back towards the father.

You may have strayed far from your Heavenly Father. You may have been apart from him for a long time. It may have been years since you sought him out in prayer or cracked open your bible. Guilt and shame is layers deep and piled on high. Maybe you’ve fallen a long way from where you once were on your journey. But remember this my friend, the distance is nothing for God. You think you’re far from God, but what is far for him? Scripture tells us in Isaiah 40:12 that his hands are so tremendously ginormous (is that a word or did I just make that up … ginormous … yeah, they’re really really big) that he measures all the heavens between his thumb and his pinky. So understand, distance is nothing for God. No matter how far you may have wandered off, you’re still in the palm of his hand.

It’s not your distance, it is your direction. Are you still wandering away from God, or have you turned to seek him again? I believe in this moment, by intentionally listening to this devotional, you are turning. Maybe this is your first time turning towards God in this day, or maybe it’s your fist time in this decade. Maybe you have a really long way to go in getting back to who God created you to be, or maybe you’ve just gotten a little off path by being busy and distracted. None of that matters, what matters here is your direction. YOU HAVE TURNED TO GOD.

And as we see in the story which Jesus told of the prodigal son, when the son changed his direction and headed back towards the father, while he was still a long way off, the father came running to him. You may have a long way to go and you think God will only bless you when you’ve cleaned yourself up and gotten your crap together. You’re wrong. That’s a lie of the enemy trying to convince you of your unworthiness. Listen to me, Jesus already died for you. The price has already been paid for you. Nothing you can alone can do will make you worthy, and nothing you alone could do would make you unworthy. This is about Jesus. All that matters here is your direction.

You may have been closer to God sometime in the past, and now you feel such guilt for having gotten off track. Get over that. Shake it off. This distance is nothing for God. It’s all about your direction. Are you seeking him again? Are you trying to make time for him again? Are you desiring his way over your own again? GREAT … then he is running to you now. He will lessen that gap.

And oh how this lesson applies to so many areas of our lives. It’s not about how far you have fallen or how far you have to go. That’s all just distance. What matters is your direction. Are you now heading towards health? Are you now heading towards financial freedom? Are you now heading towards restoration? If you are moving in the right direction, you will eventually get there. It’s what I refer to as your trajectory. If you were to start where you were last week, and draw a line to where you are today with an arrow, is your trajectory forwards or backwards? Are you getting better, or getting worse? Are you making progress or are you going backwards? The difference between having 5 pounds to lose and 50 pounds to lose is just a zero … it’s just a number. What matters is the direction in which you’re now heading. Is that number going up or is that number going down? Are you moving in the direction of health? If you’re not, don’t fool yourself!

Turn yourself in the right direction. The distance is just travel time, that’s all it is. And the travel and the time will pass. It’s all about your direction … where are you heading? What is your trajectory on the path you’re on? Is it taking you where you want to go? Are you going back to God or are you leaving him? If you have turned towards him, he sees you and he is running right for you!

And just as the father welcomes his lost son back with open arms, he does the same for you. The son was busy apologizing and begging for forgiveness and the father doesn’t even acknowledge how dirty he is. He doesn’t say, “son, clean yourself up then I’ll hug you.” No, he grabs him up, spins him around in absolute celebration and says “my son has returned home.” Was the son really home yet? No, he was still a long way off. The father had ran all the way out to him. But he was heading in the right direction, and that’s all that mattered.

No matter how far you have to go towards living the life your were created for as the woman you were created to be, no matter how far off track you may have gotten before and how much time has been wasted, all God is looking for today is your direction. Has your direction been wrong? Are you getting a little worse instead of better? Are you getting farther away instead of closer? TURN YOURSELF AROUND SISTER. He’s been waiting for you to turn fully towards the life available to you, and when you do, he comes running to meet you and guide you there. Carry you in. Celebrate your homecoming. Not to tell you how bad you’ve screwed up and how much of your life you have wasted. That’s what we do to ourselves, we don’t need God for that. God comes to remind us he never stopped loving us, never stopped looking for us, and was always waiting to run towards us when we got our direction right.

Today, we go in the right direction, and he comes running to meet us for the distance.

By Lonnie|January 15th, 2019|Categories: Devotionals, Podcast|Comments Off on 252 Turn Yourself Around