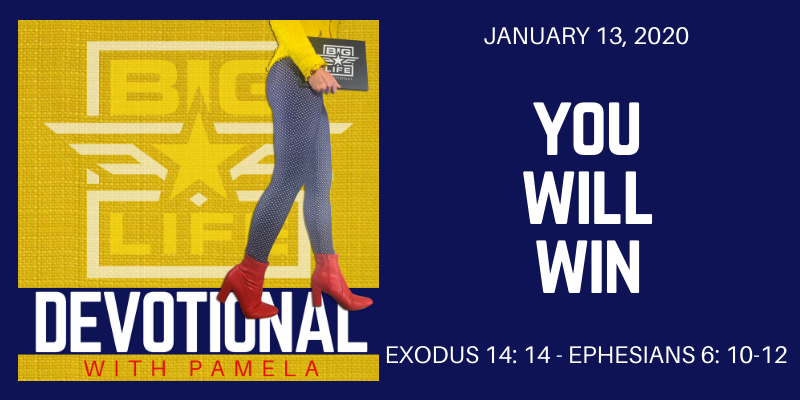 A few years ago I hosted an adventure retreat on a ranch in Oklahoma. Opening night was a surprise adventure. We were all go ziplining … in the dark! Now, not everyone was as hyped about this as I was, so first we had a pep rally to set the mood and get us fired up. You know, sometimes courage has to be stirred, and I was the stick to stir it up. Here I was with my face painted like an NFL football player, decked out in camouflage. The back of my shirt read “BUT DID YOU DIE? No … then it was an adventure.”

I spoke about chances and opportunities. I talked about fear and courage. I taught about the game of life and the dangerous sidelines. I told them about the battle required for the life they were created for. Then the music started playing. Our battle cry. It goes like this:

The voices of over 100 women roared “I believe that we will win” as we huddled in close, jumping in unison and pumping our fists.

Oh yes, we are women who have given birth to babies and in the excitement of it all, I had forgotten my bladder ain’t what it used to be. I legit peed myself in all the excitement, and I looked around to find I wasn’t the only one who had paused in mid jump to cross my legs to regain composure.

We walked out to that telephone pole that stretched high into the pitch dark of the night, and we each climbed that pole. One by one, we disappeared into the darkness as we climbed above the trees to a tiny platform. Then, with no lights and no knowledge of what was below or what was ahead, we jumped.

It was exhilarating and terrifying all at the same time. And anytime you come to the end of the night wearing camouflage, with your face painted and pants smelling a little bit like urine, you know you just had yourself a victory.

You and I are in a battle. Every day we are fighting. We’re fighting to live the life God has created us for and we’re fighting against the enemy who’s only goal is to steal, kill and destroy everything Jesus died to give us. But you and I are champions. We are more than conquerors. And understand when you are MORE THAN A CONQUEROR this means you have a habit of winning. You show up and win over and over again. You win when no one thought you would win. You win when everyone else counted you out. You win when everything was stacked against you. You win when you get knocked down because you simply won’t stay down.

I BELIEVE THAT WE WILL WIN!

Get an image of this sister, because this is who God made you to be. This is MORE THAN A CONQUEROR. A champion. You were created to be a champion in this life. Whatever battle you’re up against, may I remind you that God is for you, not against you. He has made a way for your victory.

Exodus 14:14 says “The Lord himself will fight for you, just stay calm.”

Who needs that reminder this morning? Everything in you wants to freak the freak out right now. But God is saying, stay calm, I’m fighting for you. God is with you. You are not alone in this.

Who doesn’t feel quite like a champion? Who feels more like a loser … or even more so like a quitter. Understand, that is NOT who you were created to be. You’re so much better than this. You have more in you. The reason you feel bad is because the potential within you has gone unused and you know it. That doesn’t feel good and it’s not supposed to. Let that discomfort move you to action. The life you were created for is BIG and beautiful and it requires your fight. You can’t sit this one out. You can’t keep delaying your action. WILL YOU FIGHT TODAY? WILL YOU FIGHT FOR THE LIFE YOU WANT? WILL YOU FIGHT TO BECOME EXACTLY WHO GOD CREATED YOU TO BE?

We have been equipped for the battle, so suit up my friend, THE ENEMY IS ON ATTACK.

And of course he’s on attack – he only attacks that which he is threatened by. The attack you’re under right now only reveals your value. You have something precious and it’s worth fighting for. Your marriage, your health, your family, your career, your dream, your goals – they will all come under attack. Suit up.

Within the Bible we have been given instructions for our battle. A list of weapons and what to do with them.

Ephesians 6: 10-11 “God is strong, and he wants you strong. So take everything the Master has set out for you, well-made weapons of the best materials. And put them to use so you will be able to stand up to everything the Devil throws your way.”

God is strong. We don’t have a wimpy God. He’s not powerless over any situation in your life. He’s not stuck. He’s fully capable of moving any mountain or parting any sea. And you are created in his image, in his likeness. God wants you to be strong too. You were never intended to live this life powerless. You are not incapable! You are not broken and unworthy. If you’re stuck, you have chosen to be stuck. You have focused on perfecting the next 10 steps and been frozen in overwhelm, instead of just taking the step that’s right in front of you. You have been offered strength for today, will you take it? Will you use it?

You’ve also been offered weapons for today. Every single thing you need has been set out for you by the Master. YOU ARE LACKING NOTHING. Maybe you just need to pick up what you’ve been given and get ready. Stop laying down and taking the beating of life. Stop rolling over and just settling.

You want it, go get it.
You believe in it, fight for it.
You love it, protect it.

But our enemy is one sneaky, slimy little sucker. He stirs up trouble, gets in our head, and hides behind someone else to make us fight with THEM instead of HIM. We’re all at war with each other and missing the fact that our battle is with him. Families are being torn apart because the enemy is scheming and attacking and we totally miss it. All we see is our way versus their way and we’re in a bitter feud over who’s right. We all lose, every single one of us … and the enemy wins.

When time allows, I would recommend you do a study on each of these 6 weapons. I will briefly explain them.

4. Shield of FAITH – Your faith will protect you from the fiery darts of the enemy. The darts will come, hold tight to what you believe in.

5. Helmet of SALVATION – Protect your mind. Jesus said you are made new in him, believe it. Remember it. You’re not who you used to be so don’t think the old thoughts you used to think. You don’t have to act the way you used to act because you’ve been saved from your old ways.

6. Sword of GOD’S WORD – God’s word is powerful. When is the last time you prayed his word? Occasionally my kids would remind me of my own words and it moves me like nothing else. I would be stressed and they’ll say, “now mom you always say to not take things personally and just shake it off.” Or they would say “remember mom how you tell everyone to trade their have to’s for get to’s – you don’t have to help with my dishes, you GET to.” And I am moved. They spoke my own words to me. Speak God’s words to him. Pull out your bible and pray scriptures.

In this life you will have battles to fight. It’s guaranteed. Our victory is promised through Christ Jesus. Show up for the battle, put on your gear and fight for the life you really want as the person you were created to be

By Lonnie|January 13th, 2020|Categories: Devotionals, Podcast|Comments Off on 509 You Will Win