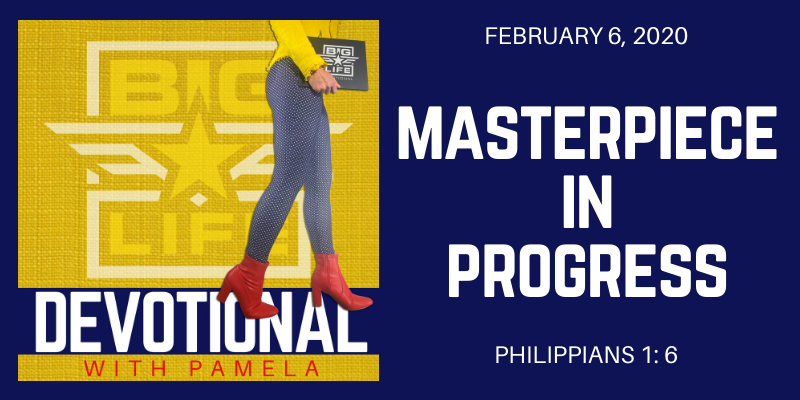 Have you ever watched an artist create one of those masterpiece paintings where you have no idea what he’s painting in the process? He’s like a mad man throwing paint with putty knives, thick brushes and even his hands. The artist can surely see something we can’t as he moves with intention and purpose, yet the canvas looks even messier in the process. It’s all so abstract and seemingly random.

Then the moment comes when the artist flips the canvas, steps away, and you see the masterpiece in it’s finished state. WOW! What seemed random wasn’t random at all. The mad artist’s thrown paint was perfectly placed to create an image that moves you to tears.

Oh, but the process. It was messy and appeared uncertain. Often times even looked as if everything was ruined beyond repair, surely nothing beautiful could come of this. But the artist knew exactly what he was doing. His masterpiece was in process.

Philippians 1:6 says “I am certain that God, who began the good work within you, will continue his work until it is finally finished on the day when Christ Jesus returns.”

God is doing something good in you honey, he’s just not finished yet. You are an unfinished masterpiece.

Anyone catching on yet to today’s song in our “Pray and Play” series? Yes, this is day 4 of me waking up, praying, then hitting shuffle play on our BIG Life Mornings playlist on spotify, then letting the first song inspire the devotional.

Today’s song to my sweet surprise and delight was Mandisa’s “Unfinished”.

My sister, you have no idea the masterpiece God is making you to be. You only see the bold black streaks that look like mistakes, and thrown lumps of paint that appear disastrous, but you must trust the master artist is still in process with his purpose and you are just unfinished.

Every mark on the canvas of your life is being used. It’s all part of the masterpiece your life is becoming. But here’s the thing, God’s one of those artists who often can’t be understood while his work is in progress. When God says in Isaiah 55:8 “My thoughts are nothing like your thoughts and my ways are far beyond anything you could imagine” … well he ain’t kidding! Most of the time I can’t figure out what the heck God is doing and why he allows some of the things he allows.

Anyone else willing to confess sometimes you feel like you could have come up with a better way than the one God has presented? God takes us right through the fire when we know he was always powerful enough to put out the dang fire before it even came close to us. But he didn’t. Why? Why the fire God? Why make us go through it? Why allow the suffering? Why allow the loss? Why these ashes?

Because his ways are far beyond anything I could imagine, and while I’m working with very limited information, God is working with the master plan because HE IS THE MASTER WITH A PLAN! He sees what I don’t see. He’s never stuck in indecision or overwhelmed with what seemingly fell apart. He’s never shocked by the twists and turns, or incapable of making a way. God is never backed in a corner with a lack of good options. NOT MY GOD!

He is the God of beauty made from those ashes. He is the God of plot twists that leave us in awe when we finally see the full picture. When he flips it around and backs us up for proper perspective. Ahhhhhh, that’s what you were doing here God. This is what you were creating in my life. That’s why you allowed that mess … it was so perfectly placed as part of the masterpiece. There were no mistakes here, you used all of this for something I could never imagine, and it is good!

You likely don’t see it right now … you don’t see the beauty, you see the mess. You don’t see the purpose of the broad strokes and the thrown paint, it all just appears as an accidental disaster. Listen to me right now my priceless sister, you are NOT AN ACCIDENTAL DISASTER, you are just unfinished.

You are God’s unfinished masterpiece, and a masterpiece never looks perfect in the process. You can’t see what God is doing … yet. You are a work in progress and God is still working on you.

I’m a huge fan of Mandisa, the beautiful, entergetic talent that sings “Unfinished”. She was an American Idol contestant eliminated in the final 10. She went on to write the hit “Overcomer” which became an anthem for anyone going through crap in life.

But oh, the story behind these two songs “Overcomer” and “Unfinished”. Overcomer was written for Mandisa’s best friend who was battling cancer.
Sounds familiar, I had a best friend who battled cancer too.

She shared how she then felt like a fraud singing this song about overcoming and she began to question the very existence of God and fell into a deep depression. Have you ever been there, honestly grappling to understand WHY bad things happen and how a good and loving God would allow it?

Years passed and Mandisa questioned. She struggled. And all the while, God was still painting her canvas. He was still working. He wasn’t through yet. And that’s where this song “Unfinished” came from. The opening lyrics say:

Not scared to say it
I used to be the one
Preaching it to you
That you could overcome
I still believe it
But it ain’t easy
‘Cause that world I painted
Where things just all work out
It started changing
And I started having doubts
And it got me so down
But I picked myself back up
And I started telling me
No, my God’s not done
Making me a masterpiece
He’s still working on me

You see things do all work out, but not always in the way we hoped or imagined. It ain’t easy! Doubts naturally come, but God’s truth is still unchanged. He is doing something good and he’s not done yet!

He started something good in you and he will continue that work until the end. And honey, when he flips that canvas around and gives you the proper perspective, you will be left in awe by what he has done in your life.

You’re one big ol’ beautiful masterpiece … but you’re a masterpiece still in progress. The process isn’t always pretty. In fact it appears uncertain and messy, but you can trust the master has a plan and he knows exactly what he is doing!

By Lonnie|February 6th, 2020|Categories: Devotionals, Podcast|Comments Off on 527 Masterpiece in Progress